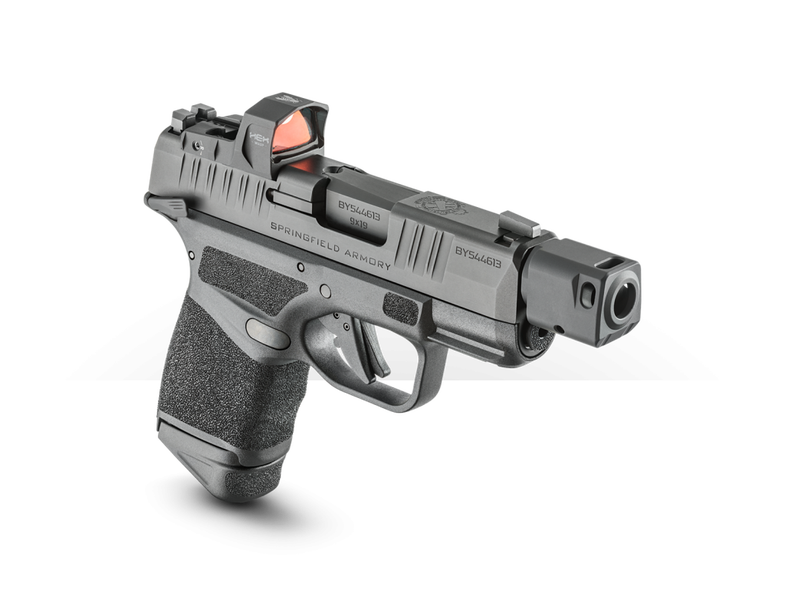 If nothing else, the world of compact EDC handguns is competitive. The sheer variety of options is staggering, and each year it gets harder and harder for a handgun to distinguish itself. Companies are working to pack more features, capacity, and better shootability into smaller platforms, and Springfield Armory’s new iteration of their Hellcat pistol in 9mm does just that.

The new Hellcat RDP (Rapid Defense Package) builds upon the innovative Hellcat platform from 2020 to improve its versatility and effectiveness as a defensive handgun. It is a micro-compact, polymer-frame, striker-fired 9mm that’s touted as the highest capacity micro-9mm on the market. It has a standard magazine capacity of 11 rounds, and includes an extended magazine that holds 13 rounds. The new features of the RDP that distinguish it from last year’s Hellcat are the inclusion of Springfield’s HEX Wasp red dot optic, a ½-inch x 28 threaded barrel, a proprietary self-indexing compensator for improved recoil management, and a model that has an ambidextrous manual safety.

From the factory the Hellcat RDP also includes a muzzle thread protector, optic sight-in guide tool, serrated top plate if you wish to remove the optic, and a flush magazine bottom-plate you can install to replace the pinkie extension. At $899, it seems to be a great value at first glance, and I was excited to get my hands on one.

Like several of Springfield Armory’s larger predecessors, the ergonomics of the Hellcat impressed me immediately. The pistol is an inch wide and 7 inches long, and for such a small platform, it fit my hands well. I found the pinkie extension on the flush magazine made a big difference for me in terms of the pistol’s comfort and manageability.

This pistol features a takedown lever and takedown procedure similar to the XD and XDM lineups, and presents no challenge to anyone who’s familiar with them. The Hellcat’s grip texture and placement is well thought out. Texture on polymer frames can be iffy, and it seems like many factory guns become as slippery as a bar of soap when your hands get sweaty. The Hellcat’s grip feels similar to skateboard tape, but actually incorporates two levels of texture. It’s designed so that clothing will slide across the top layer and not hang up, but when you squeeze the grip your skin contacts the shorter, sharper-textured level. It works well and isn’t uncomfortable or overly abrasive. One detail I especially like is the slightly concave and textured spot on the frame, just in front of the take down lever. This allows the shooter to apply downward pressure with the thumb of the support hand to help manage recoil, and is rarely included on a factory pistol.

The 3.8-inch threaded barrel adds some length to the whole package compared with the standard Hellcat, especially with the compensator, but for the versatility and aided recoil management it brings, I found the tradeoff worth it. The bottom of the barrel is notched behind the threads to work with the specially designed compensator, making it easy to install and remove. It indexes perfectly every time with no washers or other tools required. A spring-loaded lever on the bottom of the compensator just needs to be depressed while turning until it is past that notch, allowing the comp to spin off the barrel. Although the compensator itself does reduce the muzzle flip and “snappiness” of the pistol, just how much of that is perceptible to the shooter will depend on the user and ammunition. Handgun comps always seem to perform better with hotter loads and lighter bullets, because the expanding gasses make up a larger component of the recoil than when shooting heavier bullets. I noticed more of a difference with hot 115- and 124-grain loads than with 147-grain loads. It makes enough of a difference, in my opinion, to justify having it on there, and in a defensive situation every little bit helps. Although the Springfield Armory Hellcat RDP is an EDC-type platform, the threaded muzzle does allow the user to attach a suppressor. Some of the smaller and lighter 9mm cans on the market, like the SilencerCo Omega 9K or the Liberty Centurion 9, would pair best with it.

The sighting system of the RDP adds a lot of value to the Hellcat. The Hex Wasp is a small, low-profile red dot, designed specifically for micro-class handguns. Unlike some other red-dots, the Wasp sits low enough on the slide to co-witness with the Hellcat’s standard-height sights. Those metal sights consist of a highly visible “U” rear and a front post with a tritium insert. The Wasp itself has a lifetime warranty and is robustly built. The glass is inset within the protective frame enough so that the sight can be used to cock the pistol. The optic is always on and is supposed to run for around 65,000 hours (about 7.5 years) on a battery under normal conditions. The brightness of the 3.5 MOA dot is regulated by a sensor so that it will automatically dim in low light and brighten in brighter conditions. It’s a very cool feature, although I found it was sometimes slow to brighten when removing from the case or drawing it from concealment, and the dot sometimes appeared to flicker under fluorescent lights. Overall, these issues were insignificant however, and they never presented a problem in terms of the pistol’s utility.

In terms of reliability, the Hellcat functioned flawlessly from the first round I put through it. My sample, at least, didn’t require any breaking in period. It ate up a wide variety of ammo, from 115-grain ball to defensive loads like the 124-grain Winchester USA READY Defense, 125-grain Black Hills Honey Badger, and several 147-grain defensive loads. Those 147s included factory ammo from Federal Premium and Browning, and handloaded 147-grain Hornady XTP hollow points. The trigger pull is a little heavy and long, but has a crisp reset, and is pretty on-par for a non-custom production pistol. I had no problem placing quick, repeated “A zone” hits on a USPSA target face at 50 feet with any of the ammunition I tried.

For a micro-compact, Springfield Armory Hellcat RDP is very manageable, and comfortable to carry and use at close range. It’s also accurate enough at longer distances. The fact that it comes with both the 11- and 13-round magazines, has a rail for mounting a light, and can even take a suppressor gives the package appealing flexibility.

Blessed with good ergonomics, a design that’s easy to carry, and reliable cycling and ejection of empties, the Hellcat is a great option for anyone looking at a micro-compact 9mm EDC handgun.