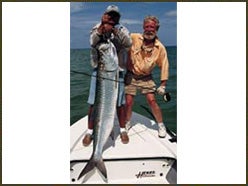 Jerry Gibbs looks like a fisherman. Seated at his work desk with the turtleneck of an old fisherman’s sweater tucked up tight under his snowy beard and his curved pipe billowing smoke, he reminds me of a Gloucester fisherman in a Rockwell painting.

He has a fisherman’s eyes-quick and predatory. Those eyes have taken in a thousand scenes from the Keys to Cordova and turned them into stories for millions of readers to enjoy-a job Jerry Gibbs has relished ever since he joined Outdoor Life 30 years ago.

The young angler came to OL from True Magazine, where he worked as the outdoor editor alongside a budding writer named Mario Puzo, who later authored The Godfather. In the winter of 1973, Gibbs was returning a borrowed VW van to a friend. “Did you hear that Joe Brooks died?” his friend asked. Gibbs said no. The friend pulled the morning paper from his kitchen trash. “You ought to apply for the job,” he advised. Wiping off the coffee grounds, Gibbs read Brooks’s obituary.

“I remember thinking I probably wouldn’t stand a snowball’s chance in hell of landing the job,” Gibbs told me recently. “But I sent my resume to then-editor Bill Rae.” To his surprise, Rae called to say he would like to meet with Gibbs at his New York office.

“Going up to Bill’s office was like entering the inner sanctum,” Gibbs recalls. “He asked a bunch of questions, but the one I remember most had to do with money. ‘You know, if I hire you you’re going to be on the road a lot and keeping some weird hours,’ Rae said. ‘I don’t suppose you expect overtime, do you?'” Gibbs laughs. “I must have given him the right answer because a few days later he called back to offer me the job.”

I’m certain that what Rae saw (and what so many readers have come to appreciate) is that Jerry Gibbs is a reader’s kind of writer: informative, funny and always himself. There is no pretentiousness in his writing, no self-promotion, no bravado. If he makes a mistake (which is seldom), he talks about it, passing on what he’s learned so readers won’t do the same. Best of all, Jerry Gibbs is a wonderful storyteller. I know, because whenever I’m with him I always ply him with single-malt and cigars just so I can listen.

Sitting on the veranda of the Gibson Inn watching the moon rise over Appalachicola Bay, I’ve heard about his Navy days, when he served under a burly chief who sometimes let Gibbs and his shipmates troll for mahi-mahi and barracuda off the fantail of their destroyer. Then there was the Atlantic salmon trip to the Ponoy River in northern Russia, when Jerry was laid up in camp with acute food poisoning.

“I thought I was gonna die,” Gibbs says. “I’m curled up in the fetal position in my sleeping bag, shaking with fever and heaving like a junkie in withdrawal. And the only guy in camp keeps asking if I’d like to hear him play his bagpipes. I’m thinking, ‘I’m never gonna see my family again and this guy keeps screeching out one death lament after another.’ It was awful.”

I saw him whip an 80-pounder in record time a few years back. Our flats boat was anchored just off the surf line. A nasty squall was coming in and the wind was blowing 25 knots or better. Waves pounded the boat and the black-bellied thunderheads coming our way were shooting long streaks of lightning into the water. Somehow Gibbs kept his footing on the bucking foredeck and made a perfect 40-yard, crosswind cast with his 12-weight to a log of a tarpon coming down the sandy trough that ran under the boat.

Few anglers I know could have made that cast, but Gibbs did. The fish ate the fly, the line sang off the reel and for the next 20 minutes I watched the master at work, all power and grace as he brought the chrome-bright tarpon alongside.

We boated the fish and the sun broke through the clouds just long enough for me to snap the photo you see heere of Gibbs and ace tarpon guide Tommy Robinson. Tommy revived the spent tarpon while I kept the boat pointed into the wind. Gibbs just sat back and smiled. “What a fish,” he said, his face beaming in the sun. And what a fisherman…. Happy anniversary, Jerry.