Out of the Ruins: Photos of Mexico’s Best Flats Fishing

A pilgrimage to the ancient fishing grounds of Punta Pajaros, home to some of the best flats action in the world 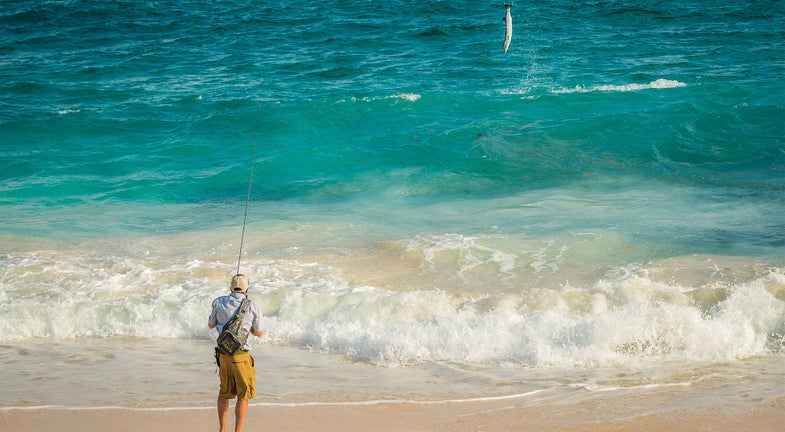 After fishing the flats each day, Jimmy Kloote surf- casts his way home along the beach. Here, he fights a 4-foot barracuda. Brian Grossenbacher
SHARE

Millennia before some bloke cast the first fly in Great Britain, Mayans had built a massive empire across Mexico’s Yucatán Peninsula. Their labors gave rise to a well-developed trade system, complex religious practices, and—like any respectable culture—exceptional fishing. One of their best spots was a place called Punta Pájaros, located on the southeastern coast. Pájaros doesn’t look like an island on an atlas, but it might as well be. Pull up a map and you’ll (eventually) find a pockmarked peninsula hemmed in by Caribbean beaches, salty inlets, and impassable mangrove swamps. The area is part of the 1.3-million-acre Sian Ka’an Biosphere Reserve (imagine a tropical national park dotted with ancient ruins). The Mayans themselves named it Sian Ka’an, which means “the origin of the sky.” If you know your history, you’ll recall that Mayans were one of several Mesoamerican cultures famous for conducting human sacrifices in a variety of creative ways.

“Sacrifices were performed in the ruins right behind the lodge,” says photographer and angler Brian Grossenbacher, who has fished Punta Pájaros for the past five years. “According to archaeologists, Mayans would raise the sacrificial victims and drop them onto a pointed rock there, which would break their back. They’d cut out the heart, rush it to a stone statue, and place the still-beating heart into a vessel or hole in its chest. The boat launch is called Sacrificio—that’s about 2 miles from the lodge.”

“Twenty to 30 years ago, there was a lot of commercial netting of these game fish,” says Pares, who co-managed the Casa Blanca and Playa Blanca lodges with his wife from 2011 to 2017. “Now a lot of those commercial guys have turned into guides in the offseason, and have created vigilance in the area. Illegal netting [and other violations] are down sharply from what they were, and it’s created a better bonefish fishery. All the flats fish are responding.”

Since the two lodges opened in 1988 and 1997, those guides have grown into flats-fishing virtuosos. The least-seasoned guide, Jorge Angulo, still has about two decades of experience to his credit. Angulo grew up inland but secured a gardening job at Playa Blanca when his parents could no longer afford to send him to school. An older guide soon began teaching Angulo how to pole a boat, find fish, and cast a fly rod. Now in his 30s, Angulo is already something of a local legend. He’s a chronic jokester and an accomplished fly tier, and has guided clients to catch more than 2,000 permit. (If you’re not into permit fishing, take our word for it—that’s a big deal.) Angulo even perfected the most successful crab pattern for the area.

“Everyone who fishes there uses Jorge’s flies,” Grossenbacher says, noting that other successful flies include baitfish and shrimp. “They’re a hot commodity. When he opens up his fly box at the beginning of the week, it’s quite a shuffling of cash and crab transactions.”

Angulo sells his flies at $20 a pop, and then helps clients catch fish on them. They pole through the shallows, sight-casting with the wind and sun at their backs for better visibility. Because bonefish and permit arrive with the tide and an entourage of other ocean life, animals like stingrays are usually indicative of a hot spot. Snook, on the other hand, hang in the shelter of the mangroves, so the guides take advantage of their ambush instincts by slamming push poles into the seafloor to mimic a rival robalo attacking baitfish.

Pájaros is one of the best places on the planet to attempt a Super Grand Slam, which attracts hundreds of hopefuls each year and requires catching all four flats species in one day. But Grossenbacher is less concerned about record books and prefers to enjoy Pájaros at his own pace with buddies Dan “Rooster” Leavens and Jimmy Kloote.

“My favorite part of the trip is sending my camera gear back on the truck and walking the beach, throwing poppers into the surf with Jimmy,” Grossenbacher says. “We have caught barracuda, jacks, and tarpon, but the fishing takes a back seat to the stories.”

Read Next: How to Catch Pressured Bass 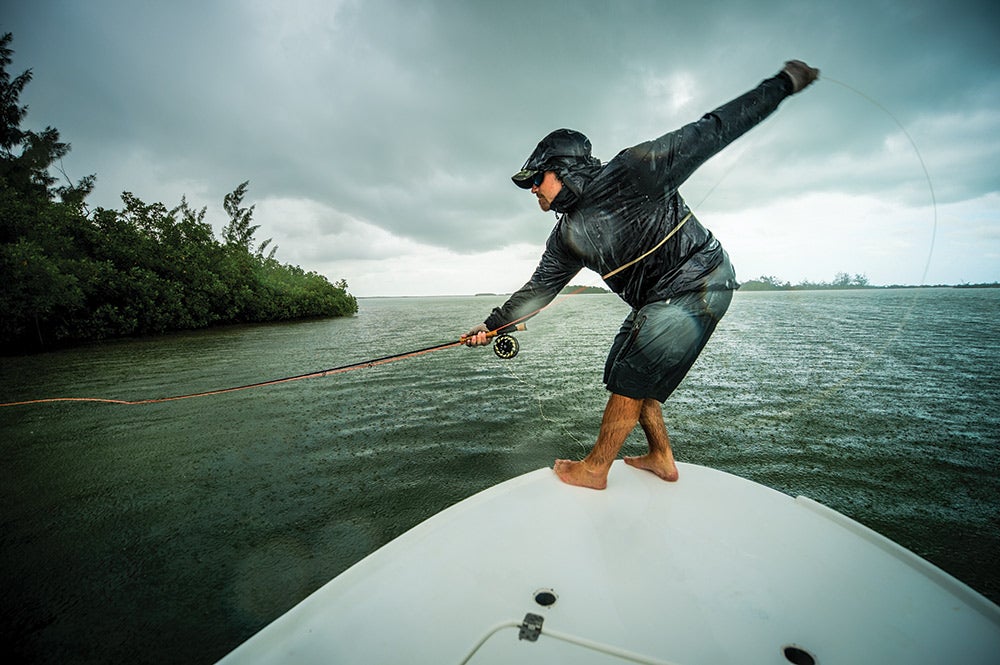 Unfazed by a tropical shower, Leavens sets the hook on a snook from the bow. Rain makes sight-casting nearly impossible, so anglers attempting to fish through a deluge must rely on knowledge of the area. 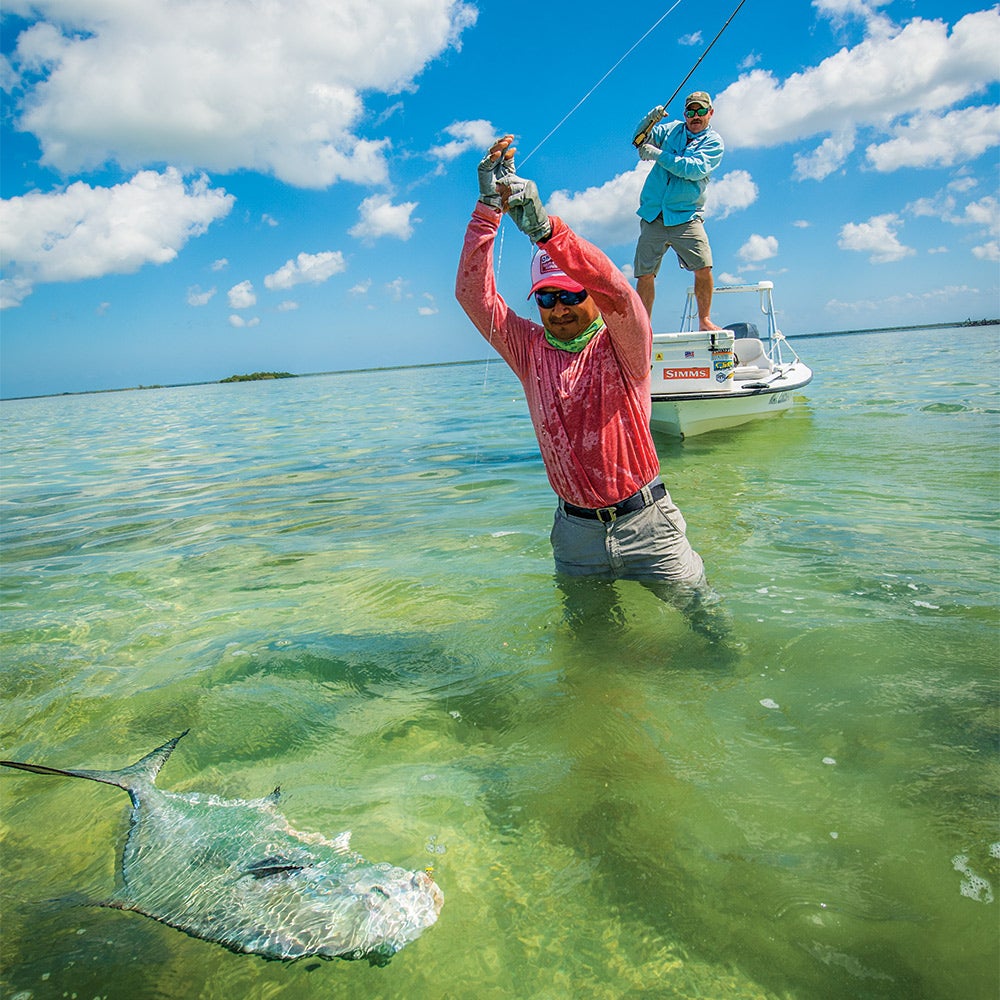 Angulo (left) helps Leavens land a large permit. The two have been fast friends ever since Angulo guided Leavens to five permit on their first day fishing together in 2006. 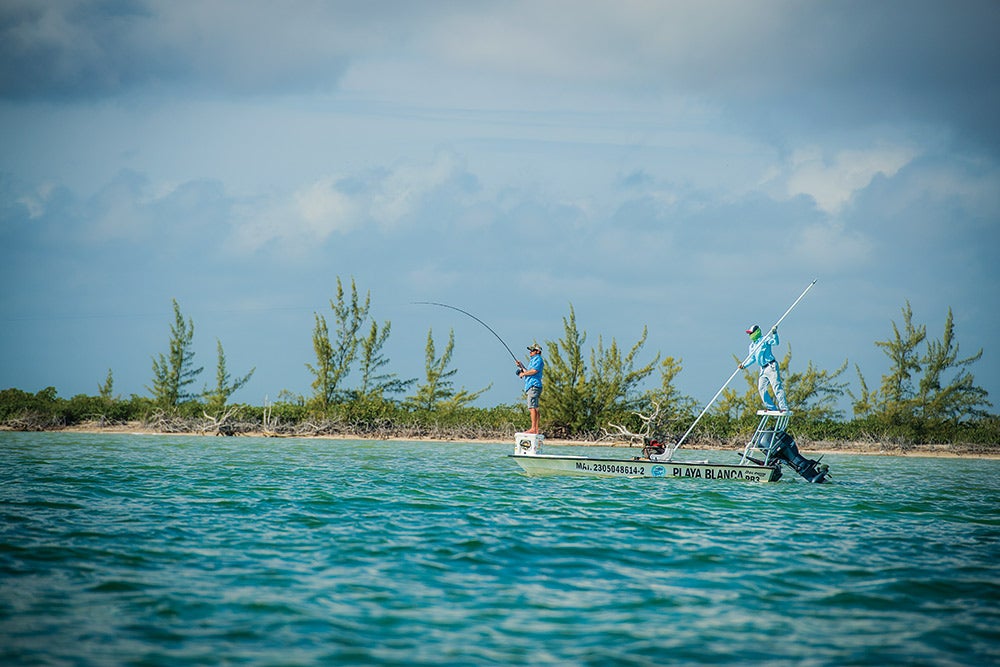 Most days, anglers pole the flats from 8 a.m. to 4 p.m. Though they’re eager to spend as much time on the water as possible, the real fishing lasts from 10 a.m. to 3 p.m., when the sun is high and visibility is best. Lunch breaks include fried fish and cold beer. Here, Leavens hooks into another permit while Angulo maneuvers with his push pole. 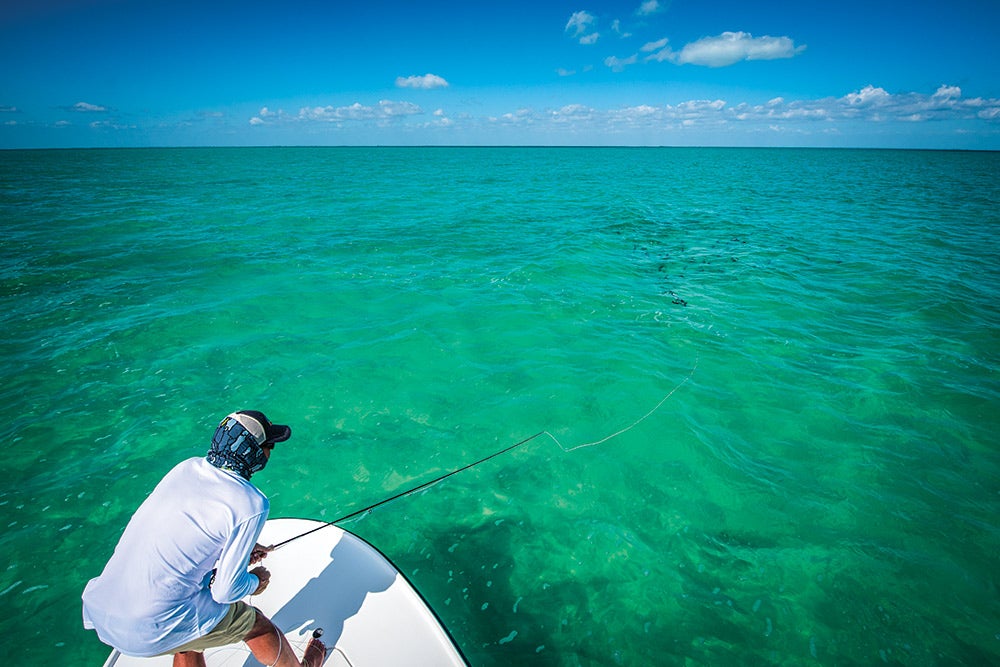 As reef feeders, permit are notoriously spooky when venturing into the shallows for shrimp and crabs. Leavens compares them to whitetails: “Everything scares them. They have giant eyeballs and they see everything. Jorge and I think they see knots in our leader.” To target bigger permit (20-plus pounds), they recommend floating line, 20-pound leader, and crab flies. Here, a school of permit stares down Kloote’s crab presentation. 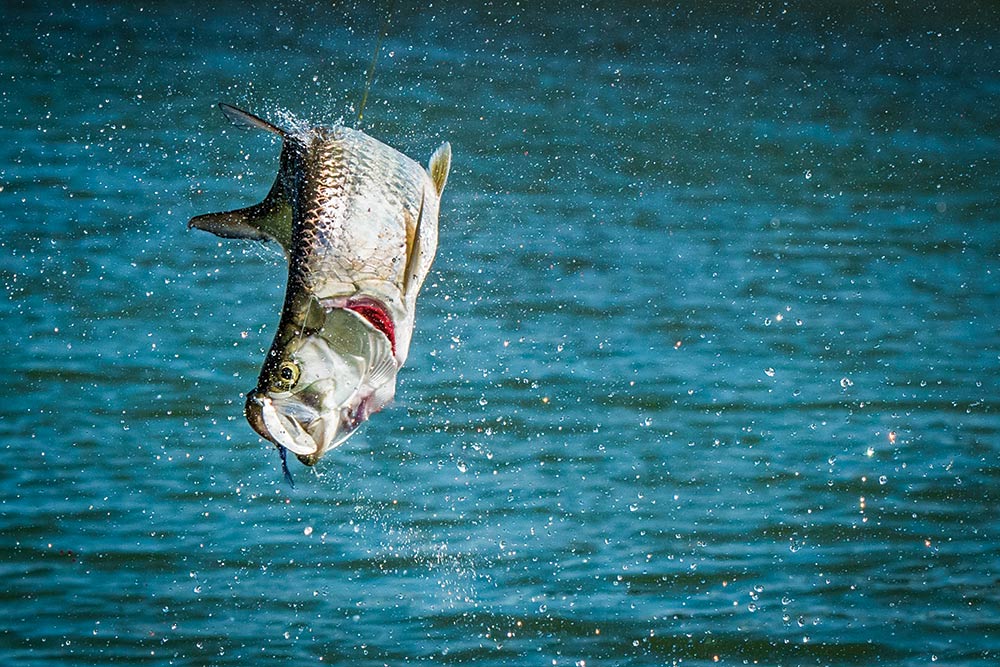 Juvenile tarpon, like this one, range from 5 to 40 pounds. They’re aggressive feeders and acrobatic jumpers. The trick to catching one? You have to spot it first. Look for noses sticking out an inch or so beyond the mangroves—anything that looks different from its surroundings—then cast your fly carefully across its nose. 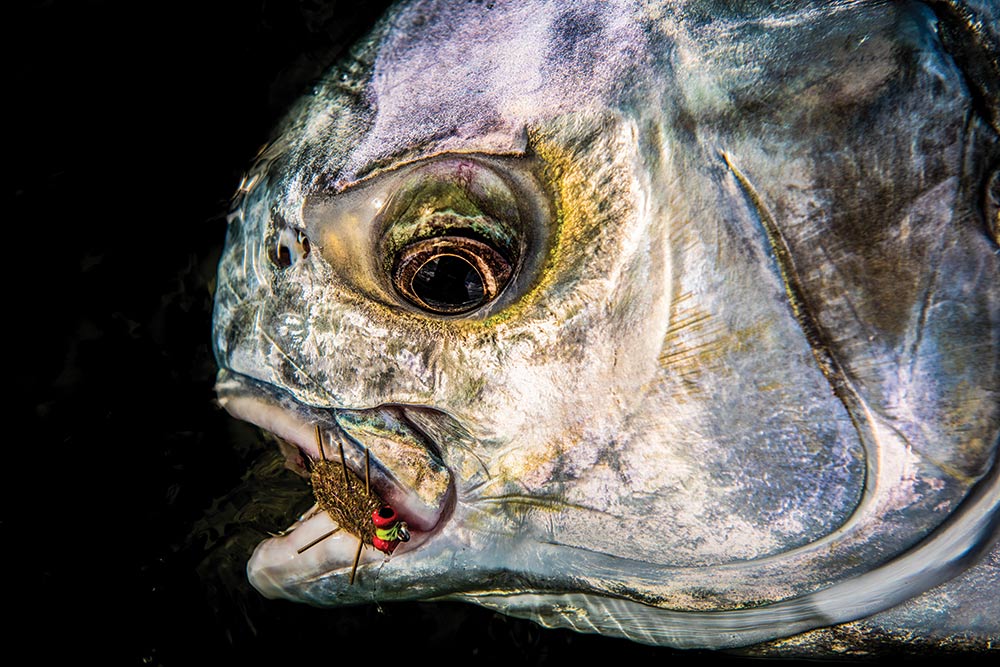 This permit fell for a custom crab fly with prickly guard hairs in the dubbing material, all glued together to form the crab’s body. 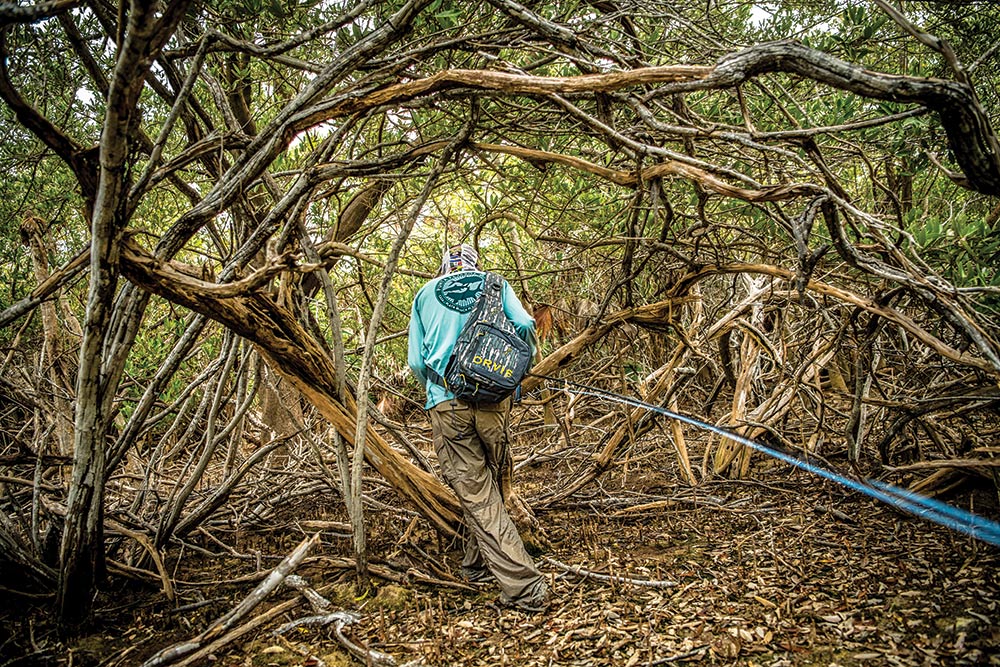 Depending on the wind and weather, anglers will trek to backcountry lagoons for snook and tarpon. 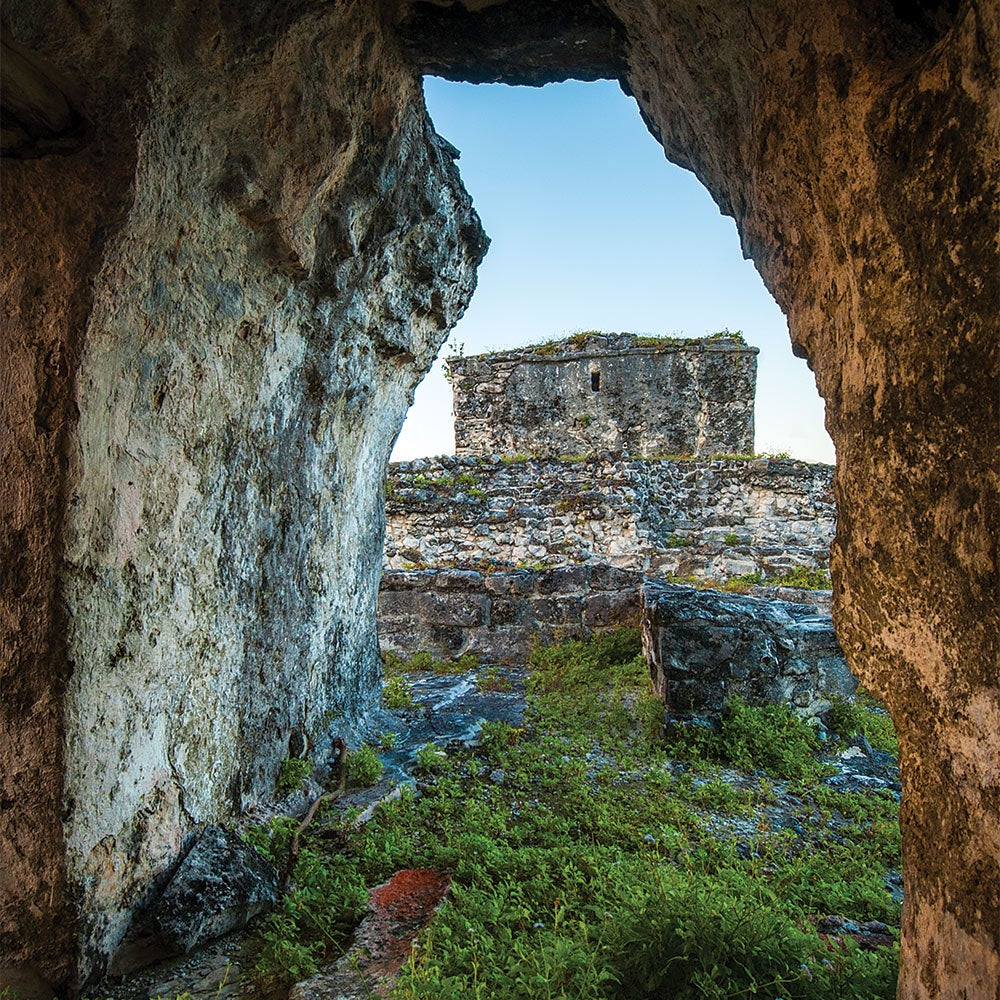 A Peek Into the Past

Chac Mool, one of two Mayan sites on Pájaros, served as a port for coastal trade via canoes with larger Mayan cities. 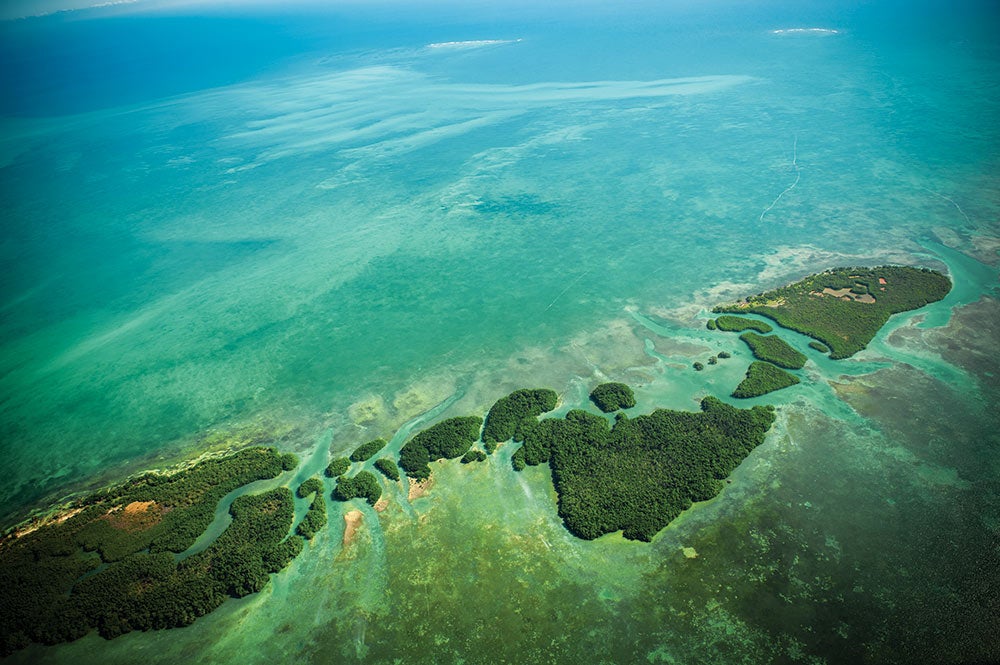 The charter flight from Cancun to Punta Pájaros offers a killer bird’s-eye view of the Sian Ka’an reserve. 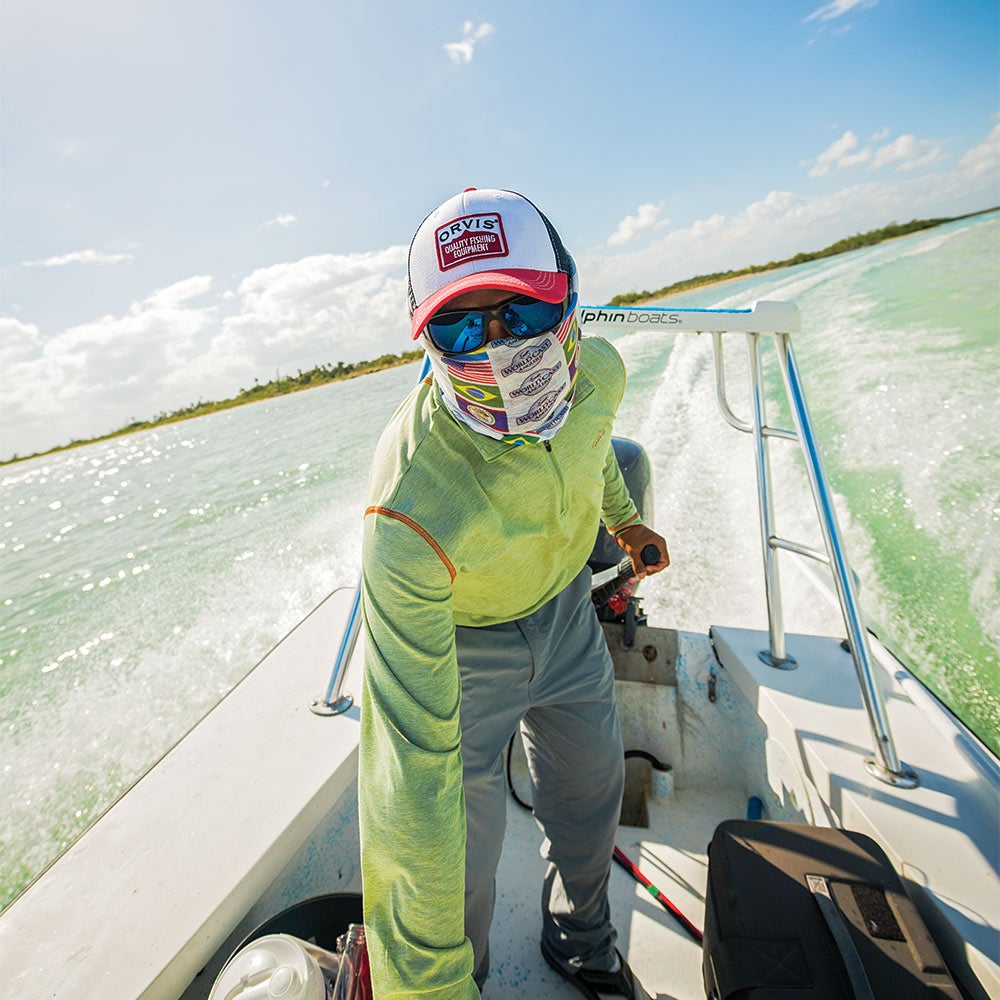 Angulo eases his boat onto plane. Guides will motor up to 45 minutes from the two lodges to reach prime spots. 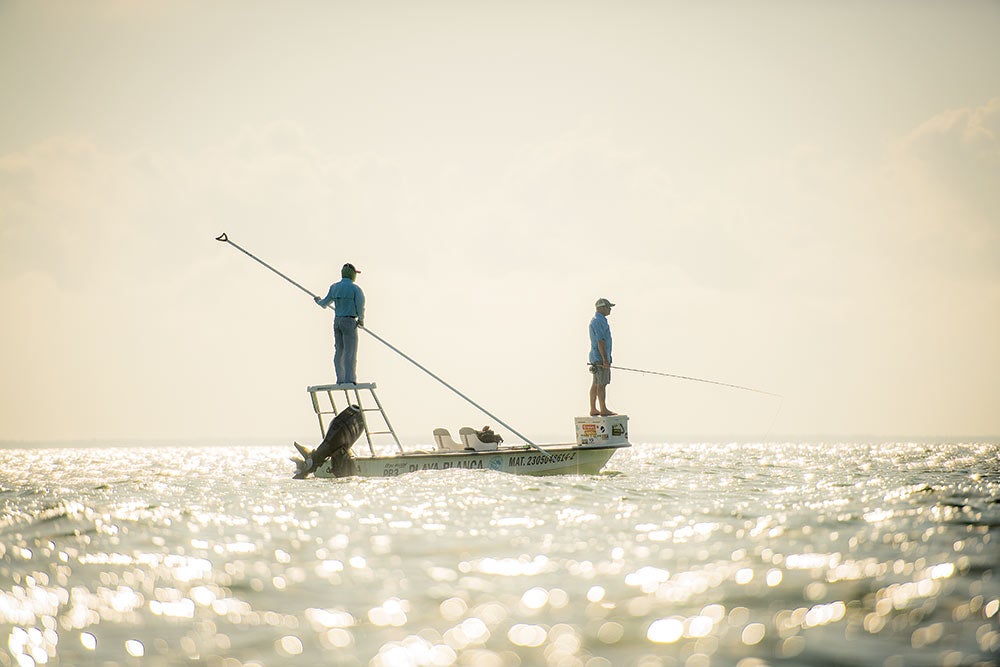 As the sun drops, so does visibility, and it becomes increasingly difficult to sight-cast.
Natalie Krebs