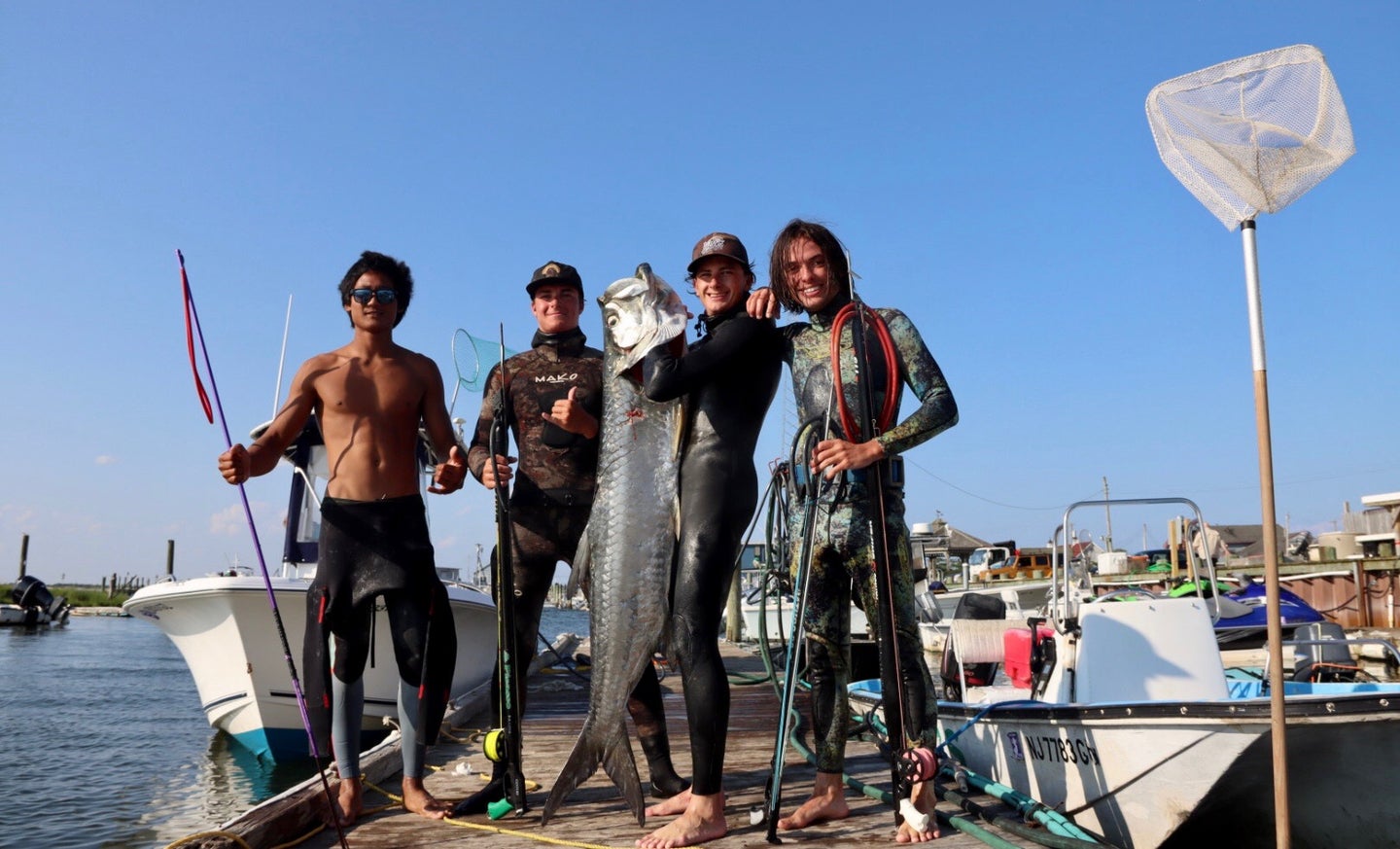 Taking tarpon on the Jersey Shore is certainly a rarity, but not unprecedented.
SHARE

Captain Jake Kline, 20, and a group of friends were free-diving with spears along the jetties of Barnegat Inlet, N.J. on July 28. They’d taken some nice fish, and Kline was on his last dive when he saw a huge fish about 25 feet deep.

He made a push toward it and to his amazement it was a large tarpon. Without hesitation he shot it with his speargun (legal in New Jersey), but the spear bounced off.

Kline surfaced, and told his pals what had happened. But no one believed him. Kline knew what he’d seen, and had caught tarpon previously during trips to Florida.

That’s when Kline decided he was returning the next day to prove them wrong about tarpon in New Jersey.

Virtually the same crew of divers hit the water July 29, and Kline’s pal Shane Kertesz, 21, was the first one down — and he saw tarpon. Kertesz re-surfaced and told his pals, adding that Kline “wasn’t lying.”

Kline dove next and immediately saw two tarpon but couldn’t get a shot at either fish, so he surfaced for air and a brief rest, then dove again.

“The second dive I spotted a school of four tarpon, and I got close and shot one behind the head,” said Kline, who owns Fish Magnet charters. “I struggled to get back to the surface where someone else could get another spear into it and finish it off.”

Kertesz hit the fish with a second spear, and they hauled the tarpon to their boat with help from Max Lentz, 18, and Bucky James, 19.

Amazed and stunned at what they’d just seen and done, they raced back to shore, and took the fish to be weighed and measured at nearby Fisherman’s Headquarters.

The sight of a tarpon in New Jersey caused a major stir at Fisherman’s Headquarters, and also when photos and word of what occurred hit the internet.

Cudnik was worried Kline may have broken laws with the tarpon harvest, but he checked state and federal guidelines, and all was in order, nothing illegal.

Kline said the divers saw 12 tarpon on July 29. Kline saw a pod of four fish together on one dive, Kertesz spotted six fish in a school on another dive. All tarpon were about the same size.

Asked what he did with the tarpon, Kline says he put it on a smoker.

“It didn’t turn out too bad,” he says about the smoked tarpon. “It was very bony, but moist, tender, smoky, and good.”

Read Next: Best Tarpon Fishing Spots in the U.S.

Since the tarpon was documented, Barnegat Inlet has had a wealth of anglers trying for the traditionally southern gamefish. But no one has seen or caught another one.

“It’s really just a fluke,” says Kline. “I just wanted people to know there are tarpon in New Jersey, and I wasn’t lying when I said I saw one.”

“We’ve had unusually warm and clear water along the Jersey Shore the last few weeks,” says Cudnik. “Temperatures have been in the high 60s and 70s. There even was a white marlin videoed from a drone in shallow surf recently [one mile from Barnegat Inlet].”

Warm water pushing to New Jersey from far offshore has not been lost on area anglers, including Kline who regularly fishes tuna.