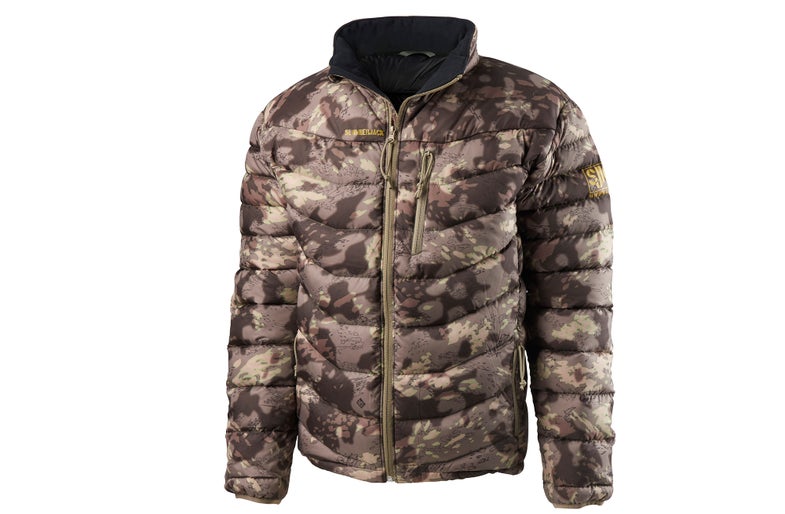 While cruising the floor at the 2017 SHOT show I kept my eyes peeled for exciting new hunting gear. I tried to cover a wide range of big-game hunting interests, with maybe a slight slant toward my favorite pastime – backcountry hunting. Here’s what I found that will get hunters excited this year (the list is in no particular order). Everything here should be available by midsummer 2017.

Badlands’ chest-mounted binocular case is very popular among hard-core hunters and guides. The torso-hugging design complete with magnetic closure and comfortable harness is indisputably great for tough, dusty, hands-and-knees, horseback, crawl-through-thicket types of hunting. It’s hard for me to believe that it could be improved — but it just did. Badland’s redesigned “BINO XR” now features a separate pocket, which is also complete with No-Zip magnetic closure, designed to cradle a rangefinder. Both bino and rangefinder pockets have sturdy elastic tethers so you can’t drop or lose either optic. Compact zip-close side pockets, rear storage, and a built-in removable rain cover round out the package. Best of all, the whole thing is covered by Badlands’ unconditional lifetime warrantee. MSRP: $149
Buy It Now!

My very first full-sized knife was a folding Buck 110, given to me by my father one wonderful Christmas. I still have that knife. First offered in 1963, the Buck 110 offered a full-sized blade in a folding knife configuration. Now, over 60 years later, it’s still going strong – and it’s gotten better. Buck just announced the classic 110 with a modern twist – an automatically opening blade. Just push the well-designed button aside the bolster and the blade flips (and locks) open with authority. This beautiful folder is made in the USA, features a 3 ¾-inch blade, brass bolsters, and a genuine leather sheath. MSRP: $200
Buy It Now!

Begone, pesky mosquitos! If you’ve ever sat amidst a cloud of bird-sized mosquitos, smugly surrounded by your bubble of Thermacell safety, you know what I mean. I was stoked to encounter this new offering with “The Backpacker” moniker. Even better than the name are the features: This little darlin’ mounts atop a simple can of Isobutane fuel (same as your backpacking stove) weighs only 4 ounces, and will run up to 90 hours on an itty-bitty 4 – oz. fuel canister. Sports an integrated piezo lighter, creates a 15 by 15 foot refuge from skeeters, and won’t harm humans or pets. MSRP: $39
Buy It Now!

I’ve spent many warm nights in a rectangular Slumberjack sleeping bag. Now the company – known for working-class, affordable, quality gear – has come out with their own line of camouflage clothing: the Perception DST (Disruptive Shadow Technology). Featuring a full-spectrum line of attire from down jackets to water resistant pants, this new line should perk the interest of hunters East and West. MSRP: $99 to $179

These two new units from Garmin could – quite literally – save your life. Not only that, but they’ll keep you in touch with loved ones – including location tracking – when you’re deep in the wilderness. They feature pole-to-pole satellite coverage, enabling you to text back and forth with any cell phone number, email address, or other Inreach device, or send a SOS message from anywhere in the world. Both models feature basic GPS functions, and the Explorer + boasts built-in Topo maps, compass and more. A monthly or yearly subscription activates coverage. Subscription rates run from $11 – 99 per month, MSRP for the Inreach SE is $399, for the Inreach Explorer $449
Buy It Now!

While cruising past the Eberlestock booth I was captivated by this fully modular system, featuring the F1 Mainframe, and two A6SB Batwing pouches. The pouches can be swung apart and a large duffel or dry bag zipped in between. Spread the system further and you can insert a big game quarter between the frame and dry bag. Or remove everything and use the frame alone to transport meat. The harness is sturdy and comfortable (my 210-pound brother climbed aboard, and I packed him around the booth). Fabric is waterproof, and everything is hydration system compatible. It’s an impressive, super customizable system. MSRP: $260 and up
Buy It Now!

Combining binoculars and rangefinding technology is almost always a good idea, so I was delighted to put some fingerprints on Nikons new rangefinding binos. Featuring ED glass and rugged armoring, the Lazerforce balanced nicely in my hand. The red OLED display features four intensity settings, ID (Incline/Decline) technology, and reads in one-yard increments past 100 yards (.1-yards under 100). Measures distance from 10 to 1,900 yards on reflective targets, and reportedly will hit a deer with regularity to 1,100 yards. It’s fully waterproof, and tripod adaptable. MSRP $1,200.
Buy It Now!

Having a wife who likes to hunt, and being entirely infatuated with wool hunting clothing (and my wife) I pointed like a bird dog on fresh scent when I spotted UA’s new wool clothing line – available in both men and woman’s versions. Available in three different camo patterns (UA Ridge Reaper Barren, UA Forest Camo, and Realtree AP Xtra) the material is a high-tech, quiet, water repellant, odor resistant, stretch-fabric blend of wool and synthetics. I can’t wait to crawl into some. Mid-season wool jacket $249, pants $224

I’ve wiped snow, mud and rain off of enough rifles and shotguns to recognize the value of a dedicated firearm drybag. Now this case isn’t completely new for 2017, but it’s new to me, and I wager will be to most of you as well. Check it out: An airtight, waterproof “drybag” gun case that will protect your rifle or shotgun whether you are riding a horse through a snowstorm or accidentally dropping the gun in a lake. This case will float too – so you don’t loose your prized firearm to the river-bottom gremlins. Fits rifles (even with scopes, as long as they are not huge) and shotguns up to 52 inches in length. Comes in several colors. MSRP: $119