Weird, Off-Beat, and Cool Guns and Gear from SHOT Show 2020

From a drybag that costs almost $800 to bait made from ammunition, this is some of the strangest stuff we saw at SHOT Show 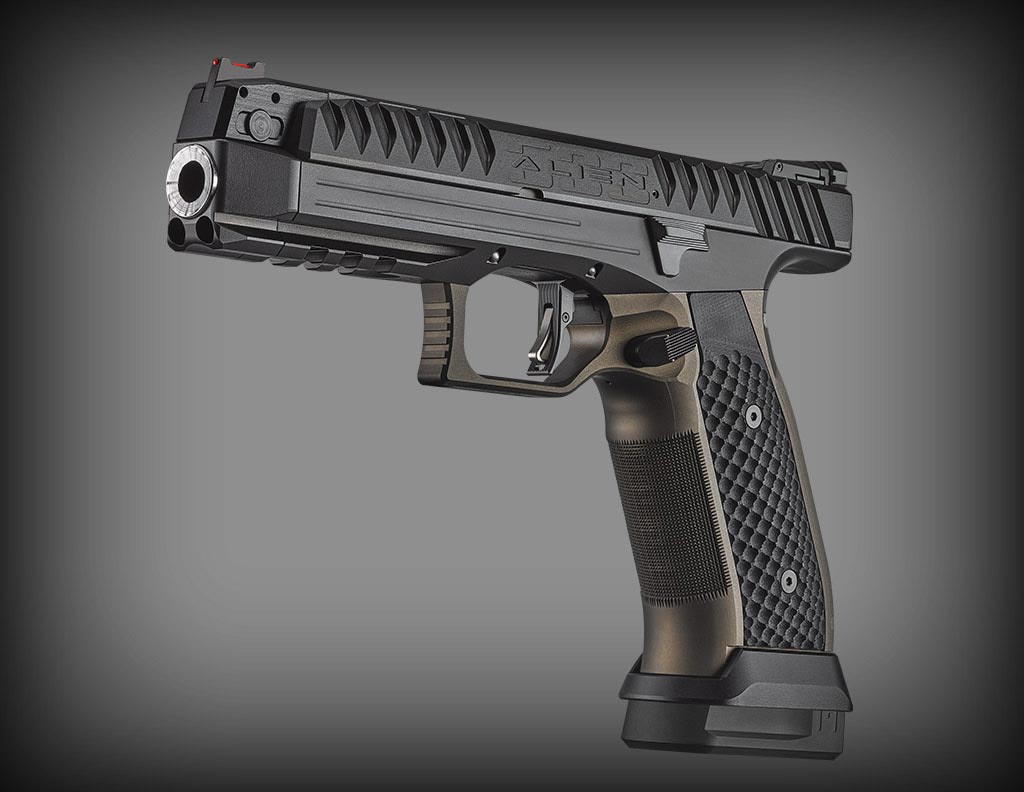 The Laugo Arms Alien is now available in the U.S. as this signature edition. Laugo Arms
SHARE

While walking the floor at SHOT Show, some things draw you to a booth for the sake of curiosity alone. There is a lot of high-tech stuff, expensive stuff, sleek stuff, practical stuff, and some impractical stuff, too. But the following is a collection of gear that was hard to place, weird, or just too cool to walk by without stopping. We’ll start with the weirdest and end on the coolest.

When compared to low-profile electronic ear protection, this product from Bei Bei Safety looks pretty goofy. At first glance, I thought it was for people who tend to lose either their ear or eye-protection at the range. But after talking to the tech, I have a whole new respect for the Eyesonic MK3. Have you ever noticed when you wear eye protection and over-the-ear hearing protection that the arms of the glasses get mashed into the side of your face and ears? The Eyesonic MK addresses that by mounting the glasses on the outside of the earmuffs. No more discomfort, a perfect seal over your ears, plus no shrapnel or unburnt powder in your eyes. It’s kind of brilliant. beibeisafety.com

The MAGnet Gun Caddy is made for leaning guns against metal objects, specifically car doors. Doing this is usually disastrous, resulting in a scratched car and a beat-up gun, but the Gun Caddy fixes that. The magnetic backing sticks to a car door, and the closed-cell foam grips the gun barrel. It works with rifles and shotguns and is good for fishing rods too. $10; peregrinefieldgear.com

CleanShot is available in 12- and 20-gauge, and it is designed as a way to quickly clean your shotgun by shooting it. The company claims after firing a CleanShot shell, your barrel will be wiped clean. I haven’t personally tested this, but from some research online, it looks like it does work. I just can’t think of a time when I would have to use it. That being said, I do like how it turns cleaning, which isn’t fun, into shooting, which is. Note: CleanShot is only for use in the field or on the range and shooters should still clean their guns when they get home. $10; huntegoltd.com

Ever want to shoot moving targets in the air with your bow? Until I saw the Phoenix Archery Trap, I didn’t, but now I do. The trap throws foam discs into the air (or along the ground like a rabbit) for archers to shoot at with flu-flu arrows. The targets can take numerous hits with an arrow and there are even soft arrow tips for use indoors. The Archery Trap is a little pricey for you to stick in your backyard. It is usually used in places like 3-D archery shoots, corporate retreats, and summer camps. I was also told pheasant hunters who hunt with a recurve like to practice this way, which had me watching pheasant bowhunting YouTube videos for hours. $4,999; us.laporte.biz

Read Next: The 10 Best Pieces of Backcountry and Survival Gear from SHOT Show 2020

Bullet Baits are for people who love bullets so much, they want to go fishing with them. The company that produces them, Fort Scott Munitions, makes CNC-turned solid copper and brass bullets. When fired from a gun, their bullets are designed to tumble on impact with soft tissue, creating a large, devastating wound channel. When they are attached to a treble hook and dressed into a lure, they are designed to catch fish. Fort Scott takes blemished bullets from their production line and turns them into Bullet Bait, a run of handmade fishing lures. While they won’t tumble through a fish the same way they will other critters, they are shiny, heavy, non-toxic baits that should attract their attention. Available in a two-pack in .40 caliber and 5.56mm. $20; fortscottmunitions.com

There are a variety of high-tech hunting chairs that promise to make the hours you spend waiting for a buck or bird more tolerable. But a lot of hunters are still getting the job done on 5-gallon buckets. If you’re ready for an upgrade but not ready to let go of the bucket, Peregrine’s Venture Bucket Pack is for you.

For dove and waterfowl hunters, this is a pretty handy thing to have. On the outside, there are pockets for up to five boxes of shotgun shells, a water bottle holder, backpack straps, and D-rings for clipping on accessories. Inside, the walls of the bag are insulated, turning your favorite bucket into a cooler for dead birds and cold drinks. The top lid is a swivel seat. It’s also guaranteed for life. $75; peregrinefieldgear.com

Also from Peregrine Field Gear, the Long Beard Turkey Hammock is the ultimate, hands-free way to carry up to 30 pounds of dead turkey. This blaze-orange bag folds and fits in a camouflage pouch to easily pack into a hunt. After you kill your bird, wrap the Turkey Hammock around it to keep the wings and legs from flailing around and catching on branches. The shoulder strap does the rest. $25; peregrinefieldgear.com

Read Next: The Best Knives of SHOT Show 2020

The LifeCard from Trailblazer Firearms is a single-shot handgun that can fold down to the size of a credit card. At .5 inches thick and weighing less than 7 ounces, it feels more like an iPod than a pistol. To deploy, unfold the gun, break open the barrel, load a round in the chamber, pull back the striker, and fire. There is a compartment for extra rounds in the handle, and the pistol is available in both .22 LR and .22 WMR. I didn’t have a chance to shoot the LifeCard, but I did handle and dryfire it at the booth. Everything worked and locked up like it should, but it did require some concentration to get it ready for action. While I wouldn’t want to bring the LifeCard to a gunfight, I would put it in a survival kit or backpack before heading into the woods. $349; trailblazerfirearms.com/22wmr

These $15,000 to $80,000 conversation pieces aren’t toys. Arsenal Firearms, the same people who put two 1911s together to make a double barrel .45, produce these perfectly scaled-down guns. The best part is they are not models; they are completely functional firearms. Every part works exactly like the full-size versions, they’re just scaled down. Theoretically, if you were to make and load tiny bullets into these tiny guns, they would shoot and cycle perfectly. At SHOT they had a suppressed AK-47 with an under-barrel grenade launcher, an MP5, a broom-handle Mauser, a Blaser, a couple of 1911s, and a few other famous guns. arsenalfirearms.com

One muffled thing I kept overhearing through my earplugs at the SHOT Show range was, “Have you shot the Alien yet?” Eventually, we made our way over to the Laugo Arms booth and decided to try it. Everything about the 9mm Alien pistol is unique (including the fact that it currently costs as much as a used pickup truck). The barrel is fixed and mounted below the trigger finger, creating the lowest bore axis of any semi-automatic pistol in the world. The sights are fixed on a solid top rail that runs the length of the gun. And instead of the whole slide reciprocating, just the sides do, keeping any mounted optic on target.

The result of all this rearranging is a recoil impulse that pushes straight back instead of flipping the muzzle upward. For now, the pistol is only available in the U.S. as a limited run of 500 collector’s editions each costing $5,000. It’s hard to justify spending that much on a handgun, but it does shoot very well. Hopefully Lancer, the company that imports the Alien, will be able to import a more affordable version soon. laugoarms.com/alien

Read Next: The Best New Pistols at SHOT Show 2020

This drybag will do everything a regular drybag will do but better. It’s made for water-bound special operations, and I feel that it’s just the kind of high-speed, low-drag gear that I need in a duck blind. It is completely waterproof, features fully-adjustable backpack straps, has laser-cut MOLLE webbing (which is way better than regular MOLLE webbing), and best of all, it inflates. You can blow this bag up like a balloon and turn the heavy gear that would have drowned you into a floatation device. When used by special forces, it works like a Multicam pool float filled with night-vision goggles and explosives. For me, after I accidentally drop it from a duck boat, it would keep my warm clothes and snacks dry and above the waterline. Unfortunately, it’s also nearly $800; leaf.arcteryx.com/us/en/

This small axe is very cool, and pretty expensive, but it’ll probably be the last hatchet you’ll ever buy. Designed in collaboration with Kevin Holland—a Special Forces operator and survival expert with over 2,000 combat missions under his belt—it feels like it’s the kind of blade you could use to field dress a mini-van.

The handle and head are made from a solid piece of 80CrV2 steel, which is tapered and gets thicker as you move towards the head. This gives the axe a balanced feel and puts all the weight right where you want it. There is a hammer end for pounding in stakes or driving nails, along with a very sharp cutting edge for fine work, like shaving tinder, and splitting kindling. While I was checking it out, a tech from the Case booth came over and said, “When I first saw it, we were in a meeting, and all I wanted to do was throw it and go cut stuff down.” I felt exactly the same way. Available in Summer of 2020, $499; caseknives.com/