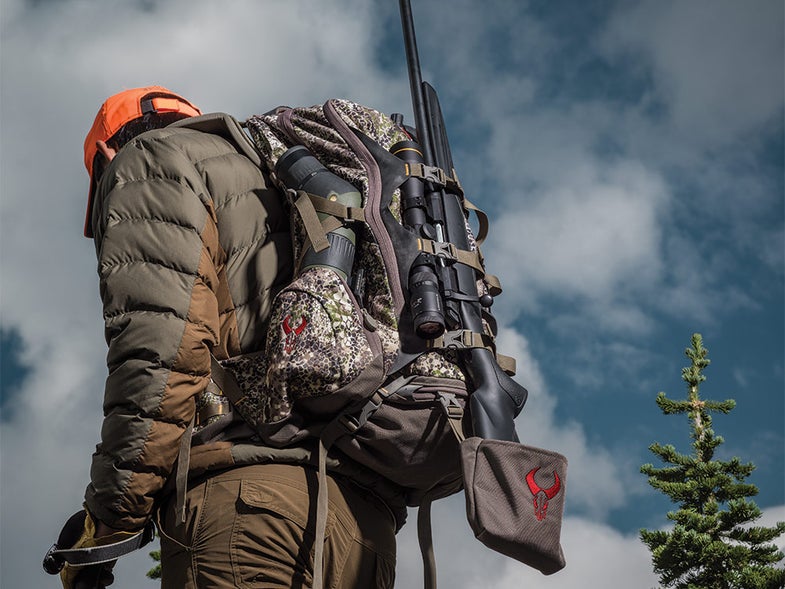 Every serious hunter needs a pack to tote the essentials of a day afield: outerwear to stay dry and warm, food and water to remain satiated, and basic field-dressing equipment to take care of an animal.

Most backpacks will fit that bill, but many of us need a pack to do more than carry the basics. We also want it to be stout enough to freight meat and have the capacity to carry enough gear—a sleeping bag, a simple stove, and extra clothing—to allow us to comfortably spend an unexpected night out in case our hunt takes us far from our starting point.

The day packs in this test are designed to pull that extra duty. We asked manufacturers to send us new packs intended for various big-game hunting pursuits, with capacities of around 2,000 cubic inches. Each should have the versatility to be used as a treestand or stalking pack, but with the backbone to comfortably haul a quantity of meat and/or heavy gear.

Here are the best of the bunch, evaluated and rated by our panel of six Outdoor Life editors.

Evaluating hunting packs is ultimately an exercise in personal preference. One person may want a zipper here or a compression strap there, or would prefer a strong internal frame over a bow or rifle carrier. A pack that fits a shorter, stouter frame won’t fit a taller, lankier person.

There’s also the matter of use. A Western elk hunter has a different expectation of a pack than an Eastern whitetail hunter.

We tested packs with those variations in mind, leaving plenty of room for subjectivity but also evaluating the objective aspects of each submission. We measured the capacity and weight of each pack and the range of adjustability of straps and belts, and then awarded points for versatility (ability to haul a gun or a bow, meat, bulky coats, and smaller items like rangefinders and phones).

We tested the strength of buckles, straps, and seams. And then we tested the fabric in three different ways: measuring loudness with a digital acoustic meter, moisture resistance by running each pack under a shower for 15 seconds, and abrasion resistance by dragging loaded packs along a gravel path.

Subjective assessments included design, features, whether the pack met the purpose for which it was intended, the ability to be adjusted to comfortably fit a wide range of body sizes, and value.

The pack with the highest score—the Kuiu Icon Pro 1850—won our Editor’s Choice award. We didn’t award a Great Buy, concluding that no pack was a runaway bargain.

A technical pack with a serious price tag, the 1,850-cubic-inch Icon Pro is designed for backcountry jaunts and extended day hunts, enabling the goal of every mountain hunter: to go in light and come out heavy. The modular pack—you can add pockets, bow or rifle carriers, and straps, or you can attach the Icon’s bag to other Kuiu frames—is built around an adjustable carbon frame that fits a range of torso lengths, although it was too small for the largest of our team and too large for the smaller testers. The pack is strong as hell. The frame is rated to 125 pounds, and under a load of 80 pounds of rocks and potatoes, the Icon was balanced and comfortable.

The Icon scored well on adjustability and versatility considerations, but the moisture-­repelling ripstop nylon material abraded easily. Still, for an extra-duty meat-hauling champ, the investment-grade Icon is at the head of the class.

The 2,100-cubic-inch Diablo DOS is designed to haul a gun or bow as well as meat and other bulky loads. Testers loved the security and adjustability of the Diablo’s compression straps, the versatility of the pockets, and the heavy, abrasion-resistant fabric. But while the nylon frame was comfortable for carrying light loads, it twisted under heavy hauls, uncomfortably digging into the wearer’s back. Pros include one-hand zippers on the hip pockets and an external strap system that can accommodate a wide variety of loads.

At first glance, this 1,890-cubic-inch pack looks like a floppy mess. But once you figure out that the wings compress over the main pocket, you can tighten the Big-Game Pro down into a slender, maneuverable pack that can expand to comfortably haul a good deal of gear and meat. We loved its accessible pockets and its ability to snugly hold a bow or rifle. “The fold-over wings are a smart addition to keep the pack in use in the event of a zipper failure,” noted senior deputy editor John B. Snow. The rifle rest is a gimmick.

This 1,900-cubic-inch pack is designed for a very specific audience: bowhunters who carry their treestands to their hunting area. For that crowd, the Tool Bucket is a smartly designed and extremely useful piece of gear. A large interior pocket holds portable stands, climbing steps, and other bulky gear. Once in your tree, the Tool Bucket can be used as a traditional stand pack. Hang it from a large ring in the flap for easy access to interior pockets. We loved the quiet, durable fabric, but dinged the Sitka on versatility and value.

The test team split evenly on this 1,500-cubic-inch lumbar pack. Half the crew—mainly Western backcountry hunters—loved the minimalist design and the smart yoke that comfortably distributes even heavy loads. The other half—Eastern and Midwestern deer hunters—felt the pack wouldn’t serve for longer day hunts and was poorly configured for a stand pack. “It’s more like a satchel than a pack,” quipped assistant editor Tony Hansen. The Muley would work well as a spike bag. It’s light (just over 2 pounds), and because it has no frame, it’s packable, so a backcountry hunter could stuff it in a frame pack, then use the Outdoorsmans as a nimble day bag. It would be a great go-light pack for scouting, shed hunting, or early-season bowhunts.

The $70 price tag on this smallish 1,800-cubic-inch day pack will turn some heads, but we were disappointed in the fit, comfort under load, and pocket arrangement of the Cabela’s pack. “This is for the casual hunter,” said senior editor Natalie Krebs. “It would do for trips to the treestand, but it won’t stand up to abuse.” Still, for a hunter looking for an entry-level pack with some nice additions—a hydration bladder, a front beavertail flap that accommodates coats and other bulky gear, and quiet fabric—the Elite Scout is a good value.

This 2,100-cubic-inch pack would benefit from a stouter frame and a more useful pocket configuration. The Browning was one of the most comfortable packs in our test when it was filled with clothing, and both the rifle carrier and the front beavertail flap worked marvelously to tote bulky or awkward-shaped gear. But when it was filled with 50 pounds of potatoes—our starchy substitute for meat—the straps pinched and the load became cumbersome. “This is more of a hiking pack than a hunting pack,” said executive editor Gerry Bethge.

Read Next: 5 Rules for Packing Out Elk Meat

A lumbar pack that converts into a light-duty backpack, the 2,700-cubic-inch Big Bear is what online editor Alex Robinson called a “tweener.”

“It’s stuck halfway between a fanny pack and a backpack, and it does not excel at being either,” he said.

The 800-cubic-inch lumbar pack is well designed, and the yoke strap fit most testers well enough, but because the 1,900-cubic-inch bag stores in the top of the lumbar portion, the smaller pack’s utility is diminished. And when the larger bag is deployed—it clips onto the shoulder harness—the pack becomes top-heavy and uncomfortable under bulky or weighty loads. One brilliant feature: the ambidextrous bow hook that holds the bowstring while a hunter glasses with both hands.

Video: Follow these tips to fit a backpack to your frame for comfortable hiking and hauling.

A number of packs in this test—the Tenzing included—feature internal frames constructed of metal rods that provide support under tension. It’s a light and strong system, but it’s also fragile. If the frame gets bent or loses its tension, it can fail, as it did when we loaded the Tenzing with 50 pounds of Idaho spuds. The lack of a substantial hip belt meant that the TX 15 was uncomfortable with even moderately hefty loads. Despite top and side entry, the main pocket was hard to access, and the fabric abraded in our drag test.

If you’re going to haul fresh meat out of the field, you are going to want to pack bags to keep the bounty clean, cool, and contained. I used to use pillowcases for this messy task. Then I discovered Caribou Gear.

The breathable synthetic game bags come in a variety of sizes, from small “camp-meat” bags to hold trimmings to large bags capable of handling a whole elk or moose quarter. We used a couple of different sizes for our pack test, stuffing the Carnivore ($55 for five bags) and Muley ($55 for five bags) with potatoes, rocks, clothes, and other hard and soft goods.

All Caribou bags have drawstrings that are strong enough to hang full bags and reflective tabs so you can find them with a flashlight. Plus, these hard-wearing game bags are washable and reusable. (biggamebags.com)