After watching all the amazing buck hunts that run on several of the outdoor networks, a hunter may start thinking... 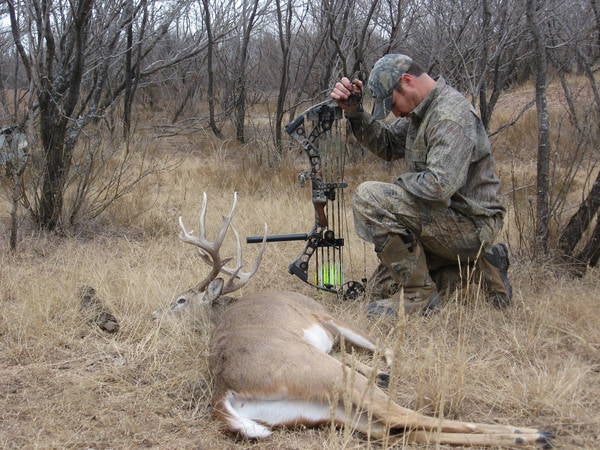 After watching all the amazing buck hunts that run on several of the outdoor networks, a hunter may start thinking that the grass is probably greener somewhere else. Hunting shows can sometimes be misleading by making things look a lot easier than what they really are. All we are watching is an edited highlighted version of a hunt that may have actually taken days or even weeks to make. However, seeing intense footage of long-tined giants fighting or thick-necked bruisers chasing does is enough to make all of us want to pack our bags and hit the road. Hunting out of state can be extremely tough and demanding when you work for a living, but it can also potentially knock you out of some really good trips right at home. This is almost what happened to an aircraft mechanic named Mike Thompson last season.

Ironically, Thompson used just about every vacation and sick day he had left last fall while hunting on the road. It was quickly turning out to be one of the worst deer seasons this bowhunter from Texas had ever experienced. Nothing was going right and it always seemed he was a day late or a few days early when it came to being in the stand at the right time. Most of the deer activity was taking place during the night on these hunts and the shooter bucks were really laying low. In the end, Thompson returned home empty handed and somewhat demoralized from his run of bad luck on the road. However, Santa Claus was about to bring this disheartened bowhunter a present he would never forget over the holidays.

Thompson decided to redeem himself and climb back into the stand over his Christmas break at home. It was the late season in north-central Texas and he had one more chance to punch a tag before time ran out. On December 22, a cold front hit that gave Thompson a quick surge of confidence. It wasn’t long before the deer were off the bed and on the move along the creek bottoms just below his stand. Suddenly, out of nowhere, the buck he had been waiting for all season long stepped into a cleared shooting lane just seven yards away. Without hesitation, he drew his bow and rested the first pin on the buck’s sweet spot before squeezing the release. The shot was perfect and a short tracking job later, Thompson found himself standing over his second best archery buck ever. Sometimes a lot of good hunting gets overlooked right in our own backyards. Way to hang in there Mike and turn your season around.