Few whitetail hunters are better, or better known, than Missouri’s Mark Drury. Here are his most memorable big-buck moments. While... 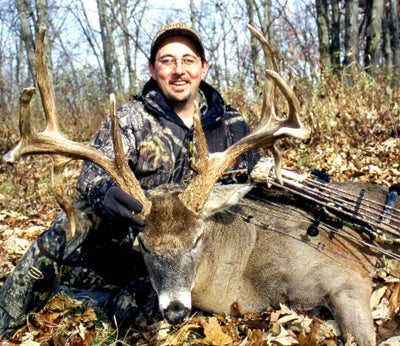 Few whitetail hunters are better, or better known, than Missouri’s Mark Drury. Here are his most memorable big-buck moments.

While technically not a true 6-point buck, Mark first saw this buck when the deer was two-years old, and an honest, huge 6-pointer. He passed the deer several times, allowing it to grow older and larger. On a cool early November morning, Drury spotted this buck on a ridge 200 yards distant, and used a new grunt call of his design to “growl” at the deer. The buck turned and came straight in- turned at 19 yards, and he made the shot. This 4 1/2-year old buck is the heaviest Mark has ever tagged, scaling 295-pounds, live weight.

Mark had seen this ancient, 8 1/2-year old Iowa buck many times. In fact he thinks the buck was larger when he passed the deer a year or two previously. The buck was taken from an Ameristep ground blind at 17 yards, in a spot where the deer had been making frequent visits to a BioLogic Greenfield planted beside a corn field.

It was early pre-rut, on Oct. 4, and the air temperature dropped like a stone as a cold front swept in on a north wind. The temperature dropped from 90 degrees, to 50 degrees on the day of the hunt. The buck was arrowed in the afternoon, on a day when Drury figured deer would be on the move as weather conditions were ideal.

Mark shot this Iowa buck on Nov. 1, and is the first buck he “growled” in with a newly-designed deer call. The 141-inch, six-pointer (deer number 1 in this gallery) is the second buck he took using this calling technique, which he arrowed two days previously (Iowa landowners like Mark can collect three bucks per season).

At 8 a.m. Mark spotted this heavy 8-pointer at 80 yards, called to him, and the 4 1/2-year old buck ran to his tree stand. He arrowed the deer at 12 yards, all of it recorded on camera. He believes a cold front beginning that day with northwest wind and 50-degree temperatures kicked the rut into gear.

Drury nicknamed this great Iowa 8-pointer “Bully,” because the rack has bases about as big around as a bull’s horns. The base on one side has a circumference of 7 7/8-inches; the other side is 8 1/2-inches; and the rack has huge mass for high Boone & Crockett measurements.

Mark shot the 5 1/2-year-old buck on December 20, during the late muzzleloader season from a tower blind. The deer was headed to a cornfield- a great spot for late-season bucks putting on weight following the rut. He’d passed the deer previously twice when it was three and four years of age.

Interestingly, “Bully” was following a smaller, younger 100-inch buck. It is the same young buck Mark’s 141-inch 8-pointer was following when Mark arrowed the bigger buck. Drury calls the young “Judas,” and believes he’ll be a shooter in a couple years.

This heavy 8-pointer was killed early in the season, September 19. It was the first Missouri buck Mark had arrowed in many years. He acquired the farm the previous autumn, scouted it carefully and placed remote cameras to learn where, when and how bucks were moving.

Mark set up the farm for hunting by carefully planting soybean and greenfields, and watched the buck all summer via remote video cameras.

Mark had prepared his bowhunting ambush for this Iowa buck the previous January, and had not visited the spot prior to the following October 19. A major cold front had swept in from Canada, and Mark believed bucks would be on the move.

He was right, as this 230-pound, 4 1/2-year old buck slipped along a fence row cover strip in a natural oak tree deer funnel. The whole hunt was recorded on camera, and can be seen on Drury’s Whitetail Madness 11.

Mark used a .50-caliber Thompson-Center Omega muzzleloader to dump this outstanding 5 1/2-year old Iowa buck at 150 yards. It was January 9, bitterly cold and is the same day he passed a chance to shoot “Bully,” the 153-inch heavy beam 8-pointer. But Bully was only 4 1/2-years old, and he would not fall to Mark until the following autumn.

It was November 6, a cool, misty-rain morning when Mark and his nephew Jared Lurk headed out of their Iowa camp to bowhunt. The weather had been warm and hunting terrible until that day, and Mark had commented to Jared that they would take deer that morning.

Mark was hunting in the timber on a deer funnel area, when suddenly two does and a young buck showed, with this huge buck in tow. The 4 1/2-year old buck stopped to rub a tree as big around as Mark’s upper thigh, when he drew and shot the deer at 23 yards.

Back at the camp it was time for high celebration, as Mark’s nephew Jared had also arrowed a deer, his biggest, a 178-inch monarch.

For score, this Iowa buck is Mark’s best bow deer. It was taken November 9, during the peak of the rut. It was the first time hunting a new stand location, and Drury and his cameraman were busy chatting in their tree stands when Mark noticed movement. They’d spooked the deer, and he slipped away out of sight. Mark began a series of aggressive calls – rattling, bleating and mock fighting. Within a minute the buck was back, moving fast looking for a doe, and Mark mouth-grunted several times to try and stop him.

The deer passed an opening at 30 yards, another at 35 yards, finally stopping at 40 yards. Mark was at full draw, and made a perfect shot. The 5 1/2-year old buck had a field-dressed weight of 230 pounds. Mark knew the deer was living on the 2,000-acre wooded farm, as his trail cameras had recorded the buck. He even passed shooting the deer once when it was 3 1/2-years of age.

This massive, double-drop tine Iowa buck is Mark’s favorite whitetail. Nicknamed “Sky Scraper” for its towering rack, this 7 1/2-year old buck was arrowed on the same farm, a year apart, on the same date (Nov. 9), within an hour of when Mark shot his 194-inch 14-pointer.

“Sky Scraper” is essentially a 170-inch main-frame 8-pointer having amazing mass and a 25-inch inside spread. With drop tines and a sticker, he scores much more.

Mark has a remote camera picture of this buck taken the night before Mark arrowed him. The deer has six-inches more rack that was lost in a fight that night with another buck within a few hours of when Mark shot him.

The buck was taken at 14 yards as he trailed a doe, from a natural hardwood funnel tree stand where several ridges merged in the middle of a 260-acre block of hardwoods.