I apologize in advance if this photo has already made the rounds, but can you blame me? Look at this... 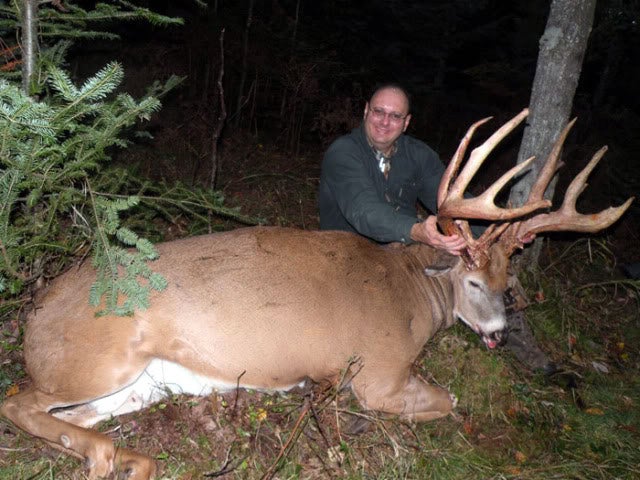 I apologize in advance if this photo has already made the rounds, but can you blame me? Look at this pig of a deer! Someone call Jenny Craig and see if this brute fell off the wagon. Reportedly shot in northwestern Ontario in 2009, the message on this E-mail photo states that the buck weighed an incredible 440 pounds before field-dressing. This deer weighs as much as a cow elk if the numbers are true.

Even if the E-mail’s originator is stretching the truth, the buck is a true heavyweight in the belly department and in the rack department. I’d bet a Thompson Center Venture that the bases on that buck are closer to 8 inches in circumference than 6 inches. And talk about circumferences; look at the mass this buck carries all along the main beam and up every tine. If the buck had a G4 on his left side his net score would be as scary as his obvious aversion for a fat-free diet.

How big can a whitetail get these days? With the craze in micro management, food plots and pouring supplement to wild, and high fence whitetails, this deer may not be the biggest on the block for long. Despite the ability to feed whitetails like hogs in a confinement facility, some very large bucks have come from the wilds. I flipped through the pages of Leonard Lee Rue’s book “The Deer of North America” and found these statistics. In 1962 Iowa hunter Dean Coffman shot a 440-pound buck that was weighed before witnesses and a biologist from the Iowa State Conservation Commission verified the number.

One of the largest bucks to ever hit the scales came from Minnesota in 1926. Carl J. Lenander, Jr. was hunting with his father near Tofte when he dropped a buck with a single shot while hunting from a stand. The buck field-dressed at 402 pounds and the Minnesota Conservation Department officially calculated the live weight at 511 pounds. According to Lee Rue’s book, Minnesota recognizes it as the largest whitetail ever killed in the state and likely one of the largest ever taken in North America.

Someone pass me another venison steak. There are plenty to go around with Bubbas like this walking the woods.