Turkey Hunting: 6 Steps to Fan in a Gobbler

Turkey fanning (or turkey reaping as some call it) has become the hottest and most controversial tactic over the last... 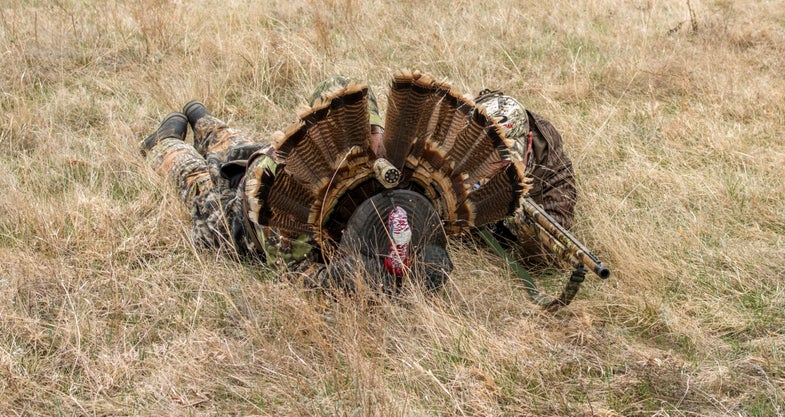 Turkey fanning (or turkey reaping as some call it) has become the hottest and most controversial tactic over the last few spring seasons. In the era of action cams and YouTube, turkey fanning has gained a fast following because it can be an exciting way to hunt, bringing charging longbeards to within just a few feet of the gun. The tactic is controversial because crawling behind a full fan decoy can be dangerous, if it’s not done under the proper conditions and in the right terrain. Never try to fan in a gobbler on public land or in a densely wooded area. Also, in some states it is illegal to stalk a turkey, so check the regs. Besides the safety aspect, some old school guys will argue that no self-respecting turkey hunter would belly crawl after a longbeard like a damn snake. Real turkey hunters call in their birds.

Fanning isn’t for everybody and it certainly can’t be used in some scenarios. But as I learned last week from Ken Byers in South Dakota, when the conditions are right, fanning can be an absolutely killer tactic. Ken has been quietly using this technique for 12 years to kill Merriam’s and Rios on the prairie and he estimates that his camps have fanned in more than 400 birds over that time. He started out with just a fan, but has since converted to a decoy with a full fan. Here’s what I took away from hunting with Ken. 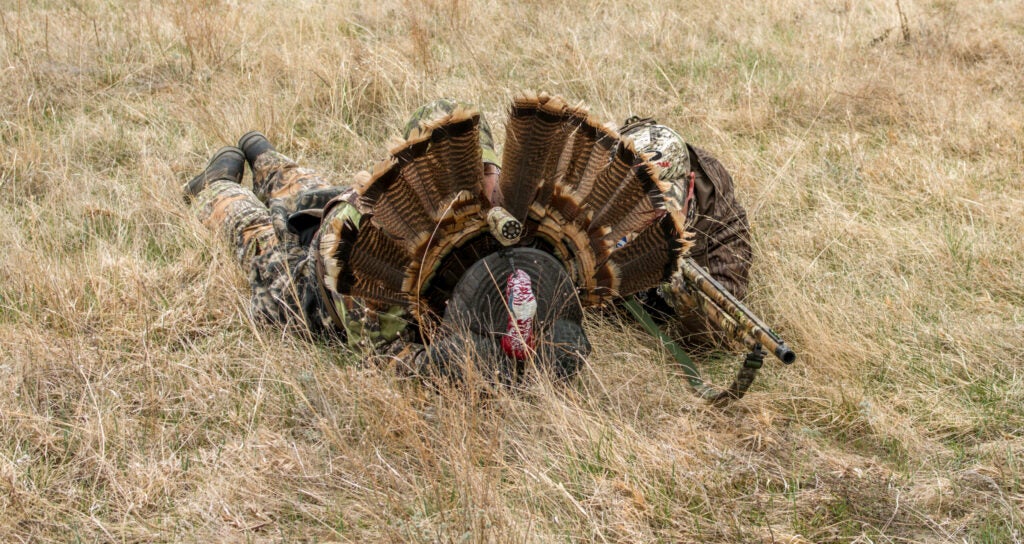 1) Wait for the Flock Up
First thing in the morning we’d hunt close to the roost and try to call in gobblers once they hit the ground — good old traditional turkey hunting. We would switch to spotting, stalking and fanning tactics once the sun came up and the birds gathered into flocks. Typically, they’d make their way from the river bottoms out into the prairies to feed and strut.

2) Spot and…Watch
It’s tempting to pop the fan up and make a move when you spot a flock of birds. But, that’s a mistake. Take some time to observe. First make sure that there are no other hunters around (look for trucks parked on the horizon and listen for distant turkey calls). Then try to figure out where the birds are headed and identify terrain you can use to get closer. Take note on how many gobblers and jakes are in the flock. Is there a boss hen that seems to be leading the group? Finally, look for any satellite toms or jakes that might charge in before you get to the main flock. Also, check for any straggler hens that could bust you. You want to gather as much intel as you can while glassing, because it will help you make decisions once you hit the ground.

3) Make Your Move
After you’ve got the flock figured out, it’s time to get into position. Get as close as you can without being spotted. Use any available terrain features and try to avoid busting deer or cows out toward the birds. Ideally, you’ll get within about 75 yards of the flock before putting up the fan. The tighter you’re able to sneak in before showing the fan, the more likely a tom will be to charge out and defend his hens.

4) Show the Fan and Make Some Noise
Show the fan and make some yelps to get the birds’ attention. Start off with some softer yelps and clucks. If the tom gobbles hard or one of the hens eagerly responds, call more aggressively. Sometimes this will be enough to get a gobbler strutting in. Other times, you’ll have to crawl out to him. Make sure to pull one or two of the feathers out of the fan before the hunt so you can look through it and see how close the tom is getting.

If you’re hunting with a buddy, you’ve got options: one can stay back and call; or, one guy can lead with the fan and the other can crawl behind him with the gun. On some hunts with Byers, he’d be on the fan with two shooters crawling behind him — if the flock has more than one longbeard, it’s possible to double. It’s the gunner’s job to stay low and keep directly behind the fanner. Most importantly, he needs to keep his gun pointed in a safe direction at all times.

5) Make the Shot
Some toms will strut in cautiously and others will come running in hot. The fanner needs to tell the shooter when the bird is in range. The shooter needs to move up to the fanner’s left or right and get the muzzle out in front of the decoy. You’ll get either a kneeling or prone shot, depending on how tall the vegetation is.

A side note on shooting a turkey gun from the prone position: Make sure to mount the gun firmly on your shoulder and not hastily against your collar bone. In the last couple years I’ve heard of two cases of hunters breaking their collar bones while shooting prone. Red dots or scopes on turkey guns can create a need for higher comb height and shooting from the prone position only amplifies this problem. So, practice shooting your turkey gun prone and consider slipping extra padding over the stock to get a little extra height.

6) Close Quarters Combat
Sure your shotgun has a great turkey-killing pattern at 30 yards, but how about 8 yards? Byers says that most turkeys are killed within 20 yards when fanning. And, many are killed inside 10. A moving tom inside 10 yards can make for a tough shot if your gun is over-choked, and Byers has seen plenty of longbeards missed at mere steps. So, if fanning is going to be your main method of hunting for the day, leave that extra-full choke in the truck and screw in an improved or modified choke. Settle for close to mid-range shots or nothing.