Cast and Blast: Wingshooting and Salmon Fishing in Southwest Alaska

The state of Alaska is home to the highest peaks, longest rivers, and largest lakes in North America. It has... 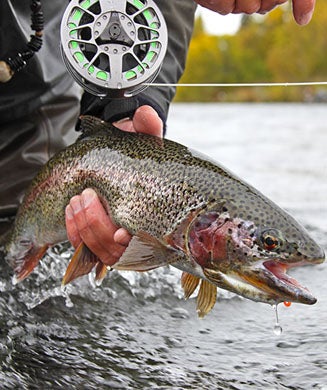 The state of Alaska is home to the highest peaks, longest rivers, and largest lakes in North America. It has glaciers, forests, and parklands bigger than entire states, and it offers some of the best bird hunting and fishing anywhere. But here’s the rub: It’s a long way from home for most of us and significant expense, time, and planning are required to get there. However, if you decide to take the plunge, chances are you won’t be disappointed.

In years past, it has been my good fortune to visit a region in southwestern Alaska that offers incomparable duck and ptarmigan hunting and rainbow trout and silver salmon fishing–all on the same trip! Wood-Tikchik State Park encompasses 1.6 million acres, making it the largest state park in the United States, while adjacent 4.7-million acre Togiak National Wildlife Refuge is one of the larger units of the National Wildlife Refuge System. Combined, they cover more than 6 million acres of the most remote and scenic public lands in the nation.

Both Wood-Tikchik and Togiak are breeding and migration areas for a variety of puddle and diving ducks. Mallard, pintail, green-winged teal, wigeon, and scaup are species that are likely to show up in the bag. The duck season in this region opens Sept. 1 and closes on Dec. 16, with a daily limit of 10 ducks.

Alaska’s state bird, the willow ptarmigan, is found in the lowlands throughout much of the area, while rock ptarmigan are present but less prevalent and inhabit the higher elevations. The state park and wildlife refuge are in Game Management Unit 17, where the ptarmigan season is Aug. 10 to April 30 with a daily limit of 20 birds.

Beginning in mid August and extending into September, silver salmon enter the rivers to spawn. These 8- to 15-pound fish are hard fighters on both fly and spinning tackle, and are recognized as the most acrobatic of the salmon. In the same rivers and streams as the salmon, you’ll catch bragging-size rainbow trout that measure 24 inches long or more. The rainbows follow the salmon and are often found just below the spawning beds waiting for stray eggs to wash downstream.

The best time to combine bird hunting with fishing is during September, when ducks are concentrated and ptarmigan are starting to form coveys. By early October, most ducks have headed south. I’ve hunted ducks in the early morning, chased ptarmigan during the middle of the day and fished for salmon and trout in the afternoon. Plan a week or longer to take full advantage of the fishing and hunting available.

In order to access the park or refuge, a commercial flight to Dillingham is required. Both Alaska Airlines and PenAir have direct flights from Anchorage. Once you arrive in Dillingham you have three options. First, you can arrange a self-guided float trip that includes the use of rafts, plus a floatplane trip to the drop-off point and a pick-up from the take-out location. You supply your own food and camping gear (or it can be rented in Dillingham) and run the rafts.

The second option is a guided float trip that includes one or more guides, camping gear, and food. Essentially, you bring your fishing tackle, shotgun, shells, and personal gear and they supply the rest. The biggest advantage to this option is the guides’ up-to-the-minute knowledge of the area. Plus, it’s a lot less hassle than an unguided trip.

While there are literally dozens of float options available, some of the best within the state park are the Wood River Lakes Trail, an 85-mile float that requires between 5 and 10 days; Tikchik River from Nishlik Lake is a 4- to 6-day, 60-mile float; Tikchik River from Upnuk Lake is 42 miles and requires 4 to 6 days; and the Nuyakuk River, which is a 54-mile float that can be accomplished in 4 to 6 days. Some floats require a permit. While all the floats deliver good fishing, both Tikchik River trips get the nod for bird hunting.

Most float trips within the refuge are on the Kanektok (80 miles and 6 to 8 days), Goodnews (50 miles and 5 to 7 days), and Togiak Rivers (variable length and duration depending on the put-in and take-out points). Generally, air taxi pilots fly your group into a headwater lake or to a wide section of the river, and pick you up on downstream on a gravel bar or in a village on a pre-determined day.

All of the floats mentioned above offer excellent silver salmon and trout fishing with a chance for grayling and char. Hunt for ptarmigan on the willow flats along the rivers and in the adjacent tundra. Ptarmigan are cyclic and some years’ populations are high while other years they can be scarce. While it too early to know for sure, it appears conditions are good for average ptarmigan populations in southwestern Alaska this year. Look for ducks in backwater river sloughs and along lake shores.

Your third option are the deluxe lodges that offer excellent accommodations, gourmet food, and daily fly-outs to remote fishing and hunting areas. At some fly-out destinations there is a remote camp with a resident guide and boats with motors. This option provides the ultimate in comfort and flexibility.
**
What to Bring**

Shotguns and shells (shells are available in Dillingham but are expensive). Either spinning or fly gear or both. Spoons, spinners, and an assortment of flies–attractor patterns for silver salmon and woolly buggers, egg patterns, and beads for trout. Most fishing is with sinking lines; use an 8-weight for salmon and a 6-weight for trout. The air charter services and guides can provide additional information on terminal tackle. Most of the lodges provide fishing tackle (including flies) as part of the price.

Where to Stay and What to See

If you float the rivers, you will sleep in tents and use sleeping bags. On the guided float trips the gear is first-class, the camps are set up for you, the food is excellent, and some even have hot (solar) showers. If you stay at a deluxe lodge, be prepared to be pampered with quality food and accommodations. Daily float plane fly-outs (weather permitting) will transport you to pristine fishing and hunting areas.

Katmai National Park is world famous for the brown bears that congregate at Brooks Falls to catch salmon. By September, the number of bears has declined but a few remain to entertain visitors. The viewing is from an elevated observation platform. There is also good fishing for trout and char in the Brooks River below the falls. Charters can be arranged for the one hour flight from Dillingham to Katmai or you can fly from Dillingham to King Salmon on a scheduled flight and then take a 20-minute hop to Brooks Camp on Katmai Air.

Self-guided float trips that include rafts and float plane drop off/pick up from Dillingham (you provide the camping gear and food) run from $1,200 to $2,000/person/week, depending on the flying time from Dillingham and the number of people in the party.