Gayle Gordon caught a likely IGFA all-tackle world record king salmon, then released it in front of dozens of other fishermen 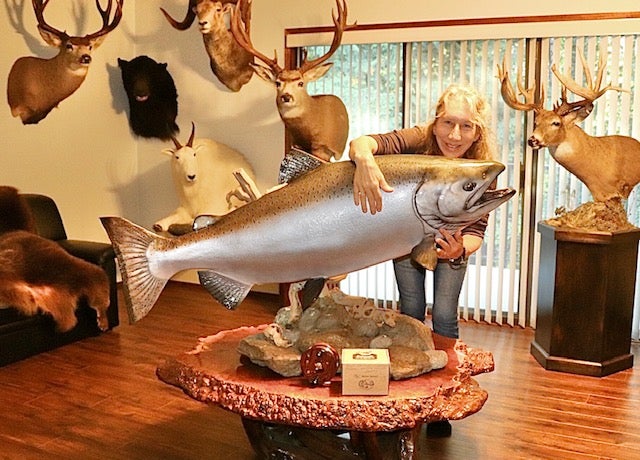 During the fabled Chinook salmon spawning run at Rivers Inlet on the southwest coast of British Columbia last August, veteran anglers Gayle and John Gordon were fishing aboard their own boat. They were mooching and drifting with cut-herring bait, when a heavy fish hit, according to Salmon Trout Steelheader.

“It was my turn to run the rods while John ran the boat,” Gayle explained to STS. “We were mooching about 25 feet [down], and when the fish bit, the head shakes were so violent, so strong. Because of the [dark] water color, you can’t see the fish until they break the surface, but I knew that this was something unbelievable!”

The Gordons are long-experienced salmon fishermen, yet it took Gayle nearly an hour to battle her salmon to the surface. During the fight, anglers in neighboring boats gathered around to watch the show.

“The people up there are so awesome and very courteous,” she told STS. “Basically, the whole fleet saw us catch it. They made a circle around us and watched—and when we got it, they went nuts. He was brilliant chrome and not a mark on him. What an amazing, amazing fish.”

The Gordons were dedicated to releasing the salmon. They quickly measured the length and girth of the fish three different times so they could get an accurate estimate of its weight. The Chinook, also known as a king salmon, measured 55 inches long and 38 inches wide. Various formulas for calculating the fish’s weight put out estimates from 100 pounds to 122 pounds, with experts who regularly calculate Chinook weights figuring the fish weighed a minimum of 105 pounds. The current IGFA all-tackle record Chinook weighed 97 pounds, 4 ounces. It was caught in Alaska’s Kenai River in May 1985 by Les Anderson. That fish measured 58.5 inches long, with a 37 inch girth—similar measurements to Gordon’s massive released salmon.

While Gayle’s Chinook will never make the IGFA record book because it was not officially weighed, she was satisfied that her released fish would still be able to spawn and perhaps have offspring that may one day reach similar gargantuan size as her estimated record catch.

The Gordons provided Advanced Taxidermy in Ontario with the Chinook’s measurements, and the business did their fish mounting magic in making a custom replica mount of Gayle’s fish, which recently made its way to the Gordon’s home.

“I feel so blessed—we were obviously fishing for big fish up there but I never dreamed of getting one that size. I caught the fish, but it really was a team effort with my husband John. After that, I gave him the next three chances on the rods in a row.”