How to Catch Bruiser Brown Trout 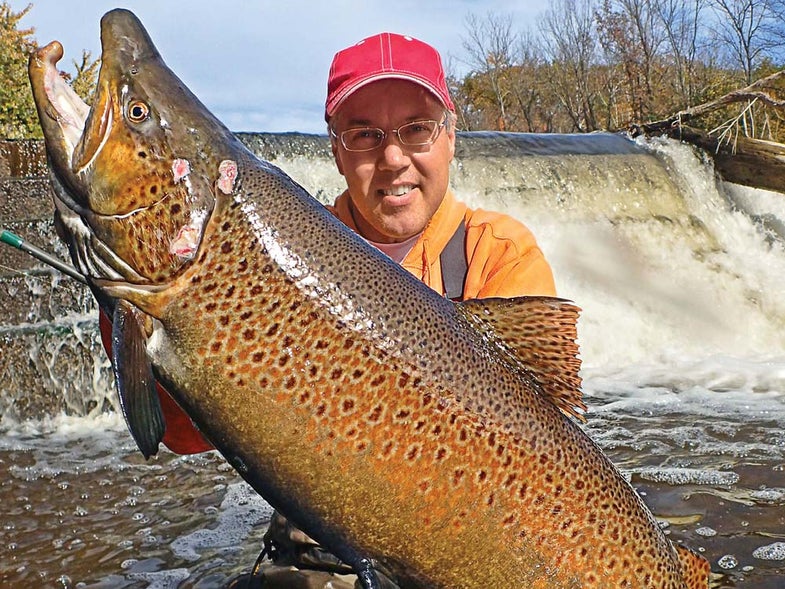 The author with a battle-scarred Wisconsin brown. Steve Ryan
SHARE

The downstream movement of the float stalled almost imperceptibly, momentarily slowing the drifting spawn sac’s dance along the current seam. In the world of trophy brown trout fishing, however, sublety enhances acuity. Reflexes take over. In that instant, I swept the rod forward as it bowed under the immense weight of the huge brown. Anticipation became reality, and I questioned all the preparation that came before the take. Was my leader strong enough? Was my knot good enough?

As the tug-of-war continued, I felt a rush of adrenalin, and I started wondering how big the fish might actually be—20 pounds, 25, or impossibly, even 30 from a stream? The fish was all power, and I didn’t get a decent look at it until midway through the fight, which only heightened my anxiety.

Finally, long minutes later, I had the hook-jawed trophy brown in hand, and I became flushed with joy and admiration for a 20-pound beast that would soon return to Lake Michigan to hopefully be caught again by another angler—or go entirely undetected for the rest of its life.

Though it might be the greatest understatement in fishing, there is something special about big brown trout. So much so that anglers have seen fit to establish significant populations of them on every fishable continent of the planet. (Antarctica still remains a bit too frigid.) Their allure comes not only from their size and beauty, but also from their wily nature. They rarely afford anglers a good enough look at them to even confirm their existence. They are masters of avoidance, spending most of their time in undercut banks and deep pools. No sooner do you get a glimpse at their daytime movement than they go nocturnal and vanish into the dark.

Prime locations for pursuing trophy browns can be found all around the globe. Scotland and Ireland are home to historic brown trout venues with old-world charm. Patagonia nearly tickles up against Antarctica and is the premier location for sea-run browns. There, they regularly top 20 pounds in large rivers that course through barren, windswept terrain. If kiwis are your thing, a trip to the South Island of New Zealand and its famed hydro canals will put you in the land of the current world-record brown trout (42 pounds, 1 ounce).

However, if you prefer to stay close to home, search no farther than Wisconsin and its Lake Michigan tributary rivers of the Root, Milwaukee, Sheboygan, Kewaunee, and Menominee.

Two primary strains of brown trout have traditionally been stocked by the Wisconsin Department of Natural Resources (WDNR): the seeforellen strain and the German, or domestic, strain. Their spawning time ranges from late September to early December. The pre-spawn period is prime time for targeting trophy fish.

Both strains originated from Germany, but they have strikingly different characteristics. Seeforellens are open-water fish. They have a more silver coloration to them, with small black accent marks. They grow more quickly since they reach reproductive maturity slightly later—at age three or four—and spawn during November and December.

Domestic browns are the trophy fish of most anglers’ dreams. These trout have classic fall colorations, with brown sides, golden bellies, and abundant spots all over. The males grow menacing kyped jaws, which help them fight off rival males. Domestic browns mature at two or three years old. They are generally more shore-oriented than seeforellens, and they start congregating in rivers during September and October. For 2017, budget cuts have forced the WDNR to slash the stocking of brown trout by more than 50 percent. In the process, they have eliminated the stocking of domestic brown trout in Lake Michigan and closed the 75-year-old Thunder River facility, which was responsible for rearing these fish. Accordingly, don’t delay your visit to the Wisconsin tributary rivers, as the opportunity to catch trophy domestic brown trout there will diminish with each passing year as the remaining stock dies off.

Successful brown trout fishing requires equal parts stealth and precise presentation. Prior to browns’ moving up onto their redds (gravel spawning beds) to spawn, look for them to hold in deep holes and adjacent to likely spawning areas. As fish get closer to the spawn, they will spend more time transitioning on and off the gravel and positioning themselves behind boulders and depressions in rapids. To target these fish, consider the five-S approach: spinners, spoons, stickbaits, spawn sacs, and single-egg imitators.

Spinners are great search lures. They can be used to cover a lot of water quickly by fan-casting wide sections of the river. Spinners can also be swung across current and held strategically in place upstream of boulders, deadfall trees, or undercut banks where browns hide. Top spinner options include Worden Rooster Tails, Blue Fox Vibrax, Mepps Aglia, and Panther Martins. Each has its advantages, but all tend to work best under sunny conditions, when their blades deliver maximum flash.

Spoons like the Acme Little Cleo or KO Wobbler have likely accounted for more shoreline-caught browns than any other type of lure. The joy of working spoons is their simplicity. Cast them out and straight-line retrieve them just fast enough so as not to snag the bottom. The occasional snap of the rod will trigger following fish to bite. When you cast spoons, concentrate on deep pool areas, such as outside river bends, around bridge pilings, and near the mouths of rivers.

Stickbaits allow anglers to work an artificial bait more slowly through an area due to their floating nature. Lures like the original Rapala Floating Minnow or Smithwick Rattlin’ Rogue are great for fooling trophy browns in low-light conditions. Big browns are piscivorous—meaning they mostly eat other fish. In addition, they become territorial as spawning time draws near and are more easily tricked into striking at an intruder.

Spawn sacs are traditionally tied with eggs from other trout (steelhead or browns) or salmon (cohos or chinooks). A cluster of loose eggs is placed into thin meshing and then cinched into a sac with elastic thread. Color and scent might be added to spawn sacs to make them more appealing to trout. There is a science to the process, but most bait shops in the port towns of Wisconsin will have pre-tied spawn sacs available for sale. Fish them under a float at a depth just above the bottom and drift them along areas that hold browns. A long rod comes in handy for drift-fishing, as does a reel with a smooth drag to compensate for light 5- to 6-pound-test leaders, which are necessary to fool wary brown trout topping 20 pounds.

Single-egg imitators or beads are the newest hot bait to hit the Midwest streams. The practice originated out West and made news on Alaska’s Kenai River. There, guides would take plain crafting beads and coat them with very specific shades of nail polish to achieve a certain color and translucency to fool trophy trout. Today, companies like Mr. Derk’s Tackle offer all sizes and colors of beads to make nail polish unnecessary for most trout anglers. A single bead is pegged on the line above a plain hook, and enough lead shot is added to achieve a natural drift. The bead resembles a loose salmon egg tumbling down the river. A sensitive rod and the ability to match the speed of the current with the bead are keys to catching browns with this approach.

The thrill of hooking a trophy brown is an incredible feeling. They are dogged fighters. If there is a submerged log or a midstream boulder, they will do their best to wrap your line around it. They never give up and will thrash fiercely on the surface, even late into a fight, to gain their freedom. But once they come to the net, trophy browns take your breath away with their beauty. It’s all you can do to smile for the camera prior to letting them slip through your fingers and hope for the next encounter.