Few gun fanciers would argue that the Remington Model 870 pump shotgun is worthy of the moniker, “America’s Shotgun.” The... 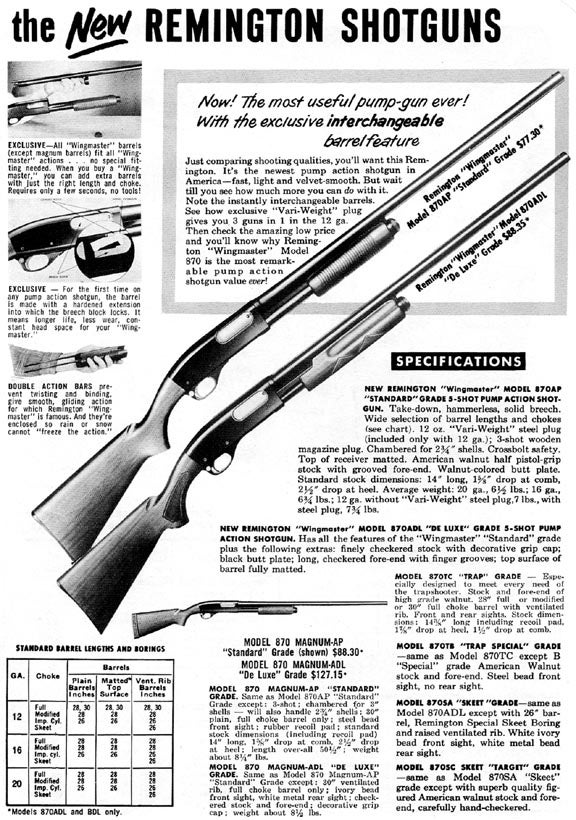 Few gun fanciers would argue that the Remington Model 870 pump shotgun is worthy of the moniker, “America’s Shotgun.” The fact is, one would be hard-pressed to find a devotee of upland bird hunting, gunning diabolical doves or chasing bunnies with beagles who doesn’t have a favorite Model 870 for such sporting pastimes.

That said, it should come as no surprise to most hunters and shooters that Remington Arms has produced quite a few Model 870s since first introducing the Wingmaster in 1950.

In a full-page advertisement appearing in national newspapers last week, Remington Arms officially announced it has surpassed the 10 million mark in its 870 production, making the tried-and-true workhorse undoubtedly the best-selling shotgun in history.

While America’s oldest gunmaker has produced literally hundreds of variations of the Model 870 throughout the years–for hunters, trap shooters, left-handers, youth, law enforcement and military–the Model 870 has remained true to its original design. Among its features are a bottom-loading, side-ejecting receiver, tubular magazine under the barrel, dual action bars, internal hammer, and a bolt that locks into an extension in the barrel.

Today’s Model 870 variants can be grouped into five main groups:

In addition to its obvious popularity among sport and wing shooters, the Model 870 is the primary close-quarters weapon used by various special forces, SWAT teams and Marine units worldwide. The reliable 870 system incorporates potent self-defense capabilities and accepts a variety of ammunition, including slug, buckshot and flare rounds.

There’s little wonder why for generations, gun owners everywhere have appreciated the value, quality and reliability of the Model 870, making it the shotgun appearing most often in residential cabinets and gun safes, law-enforcement vehicles and military outposts around the world.

Can 20 million be far behind?