8 of the Most Underrated Pump Shotguns of All Time 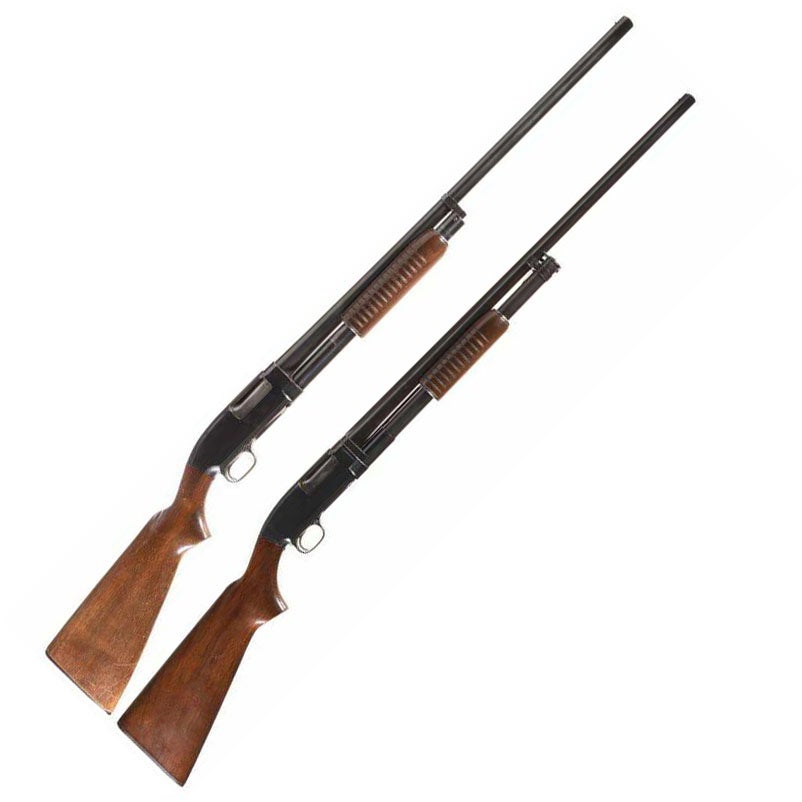 The top gun is the Winchester 25, and at bottom is the 20-gauge version of the Model 12. icollector.com
SHARE

I’m fairly certain when John Moses Browning built the Winchester Model 1893, the first commercially successful pump-action shotgun, he didn’t envision duck hunters using future iterations of his timeless design as both shotgun and boat paddle. But honestly, that’s the reason we all buy pump shotguns: because they can be dropped in the bottom of the boat, dipped in the lake, and still cycle shotshells in just about any kind of extreme weather.

We love pump guns for their durability and functionality. There’s a reason so many millions of Remington 870s and Mossberg 500s have been sold—they work. But what about the great pump shotguns that never received the fanfare they deserved? There are a select few pumps that should have spent decades as top sellers, but didn’t. Here’s a look at the best pump shotguns that never made it into your gun safe.

It looks like Mossberg started making a bolt-action rifle, stopped halfway through, and decided the 200K needed to be a pump-action shotgun. Developed in the 1950s, the 200K was Mossberg’s first magazine-fed shotgun. A detachable box mag holds three 12-gauge rounds, though you can load two shells from the top without removing the mag, just like you can with some rifles. For single loads, shooters can just open the chamber, drop a round in, and close it up. A tang-mounted safety, which Mossberg still utilizes on its modern shotguns, leads into a ported barrel with a flat rib. The muzzle is affixed with an adjustable choke. Shooters can choose from full, modified, improved cylinder, or full cylinder, depending on the hunting pursuit or use. Unlike more modern pump shotguns, the fore-end does not slide along under the barrel. It’s a piece of steel integrated into the stock, which also resembles a rifle stock with that high cheek weld.

This pump-action shotgun is over 100 years old and was only in production from 1906 to 1907. What’s cool about the 19 is it’s a hammer gun, so that means as you slide the fore-end back, it cocks the hammer, and after you pull the trigger, the hammer strikes the firing pin, sending the shot downrange. It’s also a takedown, so you can remove the barrel from the action. It’s a bit of a complicated process if you haven’t done it before (tech wasn’t as advanced a century ago), but basically you just pull the fore-end backward, flip a switch, push the fore-end forward, and the threaded barrel unscrews from the chamber. The 19 was an upgrade on the Marlin 1898 and came with a matte barrel finish. Apparently hunters didn’t like the high-gloss tube on the 98, so that was updated on the 19. One of the things you need to be careful about with this gun (and all old hammer guns) is to make sure the hammer does not strike the firing pin (or the pin doesn’t move forward on its own) before the slide is fully engaged in the chamber. That will cause the gun to misfire. The 12-gauge will shoot 2¾-inch shells, and if you can find a 19, it won’t cost more than a few hundred dollars.

Before the advent of the iconic Remington 870, Winchester’s Model 12 was the gold standard in pump shotguns. The Remington 31 was Big Green’s first real attempt at building a gun to compete with the M12. It was developed off the Remington M17 platform with one serious upgrade—a side gate loading port (the M17 was bottom fed). The M31 was first made available in 12- and 16-gauge, then later in 20-gauge, and weighed under 7 pounds, making it a damn fine field gun. I once shot a round of skeet with an old salt who had one of these beauties, which Remington made in over 30 different models, and he ran my sorry ass off the range with a gun that was built 50 years before I was even born. The barrel is threaded just like the Marlin 19, so you can unscrew it for cleaning. The fore-end stroke of the M31 is only 3½ inches, shorter than the M12 or 870. Remington ended up producing just under 190,000 of these guns before halting production in 1949. During the same time, Winchester rolled out over a half-million M12s, but Remington’s ended up doing okay with another pump shotgun—11 million 870s (and counting) have been sold since it was introduced in 1950.

The M97 was available in a long barrel option for hunters, and a trench gun version, which would make a bad-ass modern day home-defense gun. Relatively inexpensive (under $500), there’s no interceptor built into the M97, so you can press the trigger, and it will fire a round (it holds six shotgun shells) every time you work the action—plenty of firepower for home invaders. It’s an exposed hammer gun, just like the Marlin 19, so bringing the fore-end backwards pushes the slide towards the hammer and cocks it. Shooters feed shotshells through the bottom port and they eject from the side gate. Most of the butt plates were made of rubber, but some of the earlier models (the gun was manufactured from 1897 into the late 1950s) had steel butt plates, so those will likely thump your shoulder. Also, most of the M97s were takedowns, but some were solid frame guns.

Once upon a time Smith & Wesson brought a pump-action shotgun to market, and it ended up being a pretty damn good one. The 3000 was produced by Howa in Japan, where Browning still manufacturers guns like the Citori (though in another facility). It was introduced in 1980, in 12- and 20-gauge, but only produced for a few years. There was a sporting version of the gun, but also a black synthetic tactical offering that was built with a folding stock, which would still make a fine truck gun today. The 3000s all had fixed chokes, but you had options between improved cylinder, modified, and full in the 20-gauge. There was also a tapered slug barrel for deer hunters, and a waterfowl model that had a fixed full choke. Chambered in 3-inch magnum, the barrels were built from hammer-forged steel to last a lifetime and then some.

Read Next: 9 of the Most Underrated Semiautomatic Shotguns of All Time

The fore-end and stock of the Marlin 120 looks very much like that of a Remington 870, and the action resembles the Winchester Model 12. That probably wasn’t by accident. But the 120, which was in production in the 1970s and ’80s never caught on like those two famous guns did. One of the reasons was its weight. The 12-gauge is an 8-pound gun with a 30-inch barrel. It also got a stigma for having cheap action bars that would break, rendering the gun useless unless you knew a very precise welder. One of the quirky aspects of this gun was the 40-inch barrel model. I can’t imagine trying to shoot that long of a gun out of a duck or goose blind, but it would make one hell of a pass shooting pump-action. With its fixed-full choke, I’m sure there were some very accurate shooters that killed birds at distance when lead loads were legal for waterfowl. But there’s no sane upland hunter who would want to lug a gun like this around the prairie all day. It’s still a great value though. You can pick one up for under $300 (likely less) and, if you can find a 26-inch slug barrel, it would be a hell of a deer gun.

Another takedown pump, the Model 37 was designed by John Browning as the Remington 17. But when the patent ran out, Ithaca decided to produce the 37. It’s said to be the longest production run pump shotgun in history. To remove the barrel from the action, you simply unscrew the nut at the end of the fore-end, and twist the barrel off. To put it back, just slide the barrel back into the action and screw the cap tight. It’s a bottom fed, bottom eject gun (the Browning BPS was designed off this model), which means the sides of the receiver are solid and that makes it more difficult for debris to enter the chamber. It’s still being made today and is available in 12-, 16-, 20- and 28-gauge with 20-, 26-, 28-, and 30-inch barrels. There are a variety of 37 models, including trench guns, clays guns, standard and deluxe models with vent ribs, supreme grades, a deer gun (DeerSlayer), and the Featherlight, among others.

Shotgun makers have been trying to build more affordable versions of their best-selling guns for over a century and it typically results in failure. Most shooters are willing to spend a little extra cash for a better product, especially when it comes to a firearm. But now that vintage Model 12s have become so pricey, if you can find a 12-gauge Model 25, it’s worth buying because it’s essentially the same gun as the M12. The main difference is the M25 is a solid frame gun, and the M12 is a takedown. It has a plain pistol-grip stock with a grooved slide handle (just like the M12) and 26- or 28-inch barrels. It was only in Winchester’s product line from 1949 to 1954, during which 88,000 guns were sold…not exactly a high number for a six-year period. But even though there aren’t many of them left, they’re still affordable.