Criminalizing the Bill of Rights 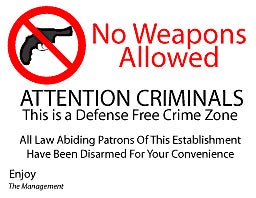 There is an interesting debate with national implications under way in California. The state’s Assembly will soon ponder AB1934, a bill that could make it a crime to openly carry an unloaded handgun anywhere.

This bill is a direct response to the growing, nationwide open-carry movement. And it is a classic tactic used by anti-Second Amendment fascists – criminalize the Bill of Rights.

But discussion about the bill has exposed other dangers to your rights: Misunderstanding of the Constitution and Bill of Rights.

For instance, as Chris Hinyub of the California Independent Voter Network writes in a May 19 blog, there are some who don’t believe the Second Amendment applies to individuals – despite the Heller 2008 decision and a host other related rulings.

He quotes one police chief saying he supports AB1934, and believes the Second Amendment only applies to individuals who “ban together,” such as in “well-regulated” militias that he, himself, can “regulate.”

The “logical fallacy” here, as Hinyub notes, is “that militias should be afforded open carry protection yet everyday pedestrians and bystanders should not.”

This is a dangerous misconception, especially by a local public official sworn to protect your rights. Sometimes, local law enforcement agencies need to be reminded that protecting rights is part of their obligation to “protect and serve.”