Keep Your Nuts, Buy a Holster

There’s an allegorical component to the story of the poor fellow who put a slug though his tender bits while... 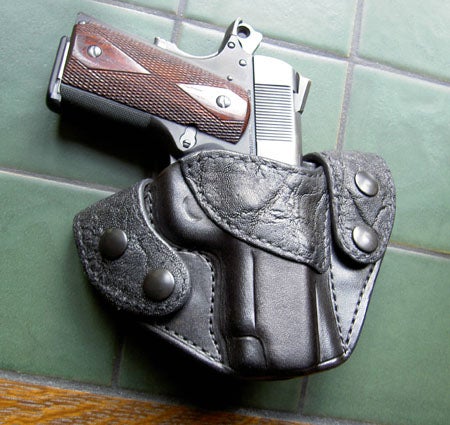 There’s an allegorical component to the story of the poor fellow who put a slug though his tender bits while shopping in Lynnwood, Washington over the Memorial Day weekend. According to this report, he had a gun tucked into the waistband of his pants when he dropped the hammer. (Pulling a Plaxico, perhaps?)

The lesson is this: don’t be cheap with your accessories. With any gun, but particularly with one you’re going to carry on your person, spend the money to buy the right accessories. This includes the ammo, holsters, slings, cleaning equipment, scopes, sights, gun cases and whatever else might be necessary.

For the last 20 years one of my principal carry guns has been my Glock 23. The day I bought it I put in an order for a Milt Sparks holster and sent the slide off to Wayne Novak to have him remove the Lego block sights that came with the gun and install a pair of his sleek combat sights with Tritium inserts. That cost me a bit of extra money at the time (especially given my budget in those days) but they were an investment that has more than paid for itself over the years. If nothing else, I still have all my original plumbing.