Peep Sights: How to Improve Your Vision and Shooting

Photo by Rab Cummings What if I told you of a rifle aiming system that was fast, rugged, and inexpensive?... 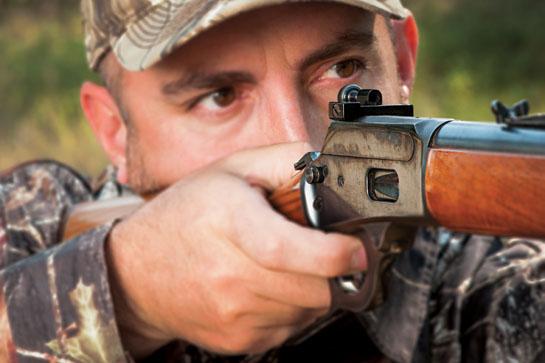 What if I told you of a rifle aiming system that was fast, rugged, and inexpensive? That was as effective on a rimfire as on a dangerous-game rifle? That won’t ever fog or lose its aiming point because of a dead battery? And, almost unbelievably, what if I told you it actually improves your vision?

This super sight exists, though it has been nudged aside lately by red-dots, reflex sights, and low-mag riflescopes. It’s nothing other than an old-school peep, the simple aperture that works all these tricks by taking advantage of your eye’s desire to find the center of a circle.

Before I extoll the virtues mentioned above, a little context: I grew up hating peep sights. My father was a peep-sight apostle, and he installed various Lyman and Williams receiver sights on every rifle our family owned. They were very much at home on the battery of lever guns he owned, but even on those Winchester .25/20s and Marlin .30/30s, I longed for a simple 4X scope.

As I enter my middle years, however, I realize that my father’s adherence to peeps had less to do with orthodoxy than with his failing eyesight. As our eyes age, it becomes increasingly difficult to shoot open sights, as our focus strays between target, front post, and rear notch. And if you’re a shooter with multiple rifles, telescopic sights can be an expensive proposition, since even run-of-the-mill scopes cost around four times the price of a $50 peep. Besides, scopes can fail.

Peep sights improve on notch-and-post open sights by improving your eye’s ability to see the front sight in relation to the target. Don’t believe me? Then try this: Grip a pencil in your palm, then curl your fingers around it. Now slide the pencil out. You should have a narrow tube in the bend of your fingers that you can peer through. If you look at distant objects in bright light, they appear sharper and more focused than they do without your hand-made peep.

That’s because your focus sharpens when you look through a small gap. It’s why the field of view is so long and sharp through a camera lens that’s stopped down to a tiny aperture. And it’s why peep sights can actually boost your vision.

Peep sights also improve on magnifying optical sights by allowing you to see a wider field of view, at a fraction of the cost.

And peep sights can be surprisingly precise aiming devices. They’re used in Olympic rimfire competition, and long-distance shooters score remarkably well with match peep sights. I grew up respecting their ability as both-eyes-open sights for shooting running deer and rabbits, and they remain the best moving-target sights I’ve ever shot.

But on standard hunting rifles, peep sights can be excellent middle-distance sights as well, mainly because your eye instinctively puts the front post in the middle of the peep’s aperture, every time the same way. And as anyone who’s ever shot at a bull’s-eye knows, the key to tight groups is consistent repetition of the sight picture.

To test this, I mounted first a Williams receiver sight and then a 6X Leupold scope on a Winchester Model 94 .30/30 and shot with both out to 300 yards at a 20-inch bull’s-eye, using Hornady’s 160-grain FTX Leverevolution load. Granted, the old “dirty thirty” isn’t the most precise rifle in my collection, but it’s a good platform for the test.

At 50 yards, the riflescope produced slightly more accurate results, probably because the front post on my rifle obscured much of the target, making a precise aiming point difficult with the peep. But at both 100 and 200 yards, the peep sight held its own. At 300 yards, the optic had the clear advantage, though the group size was inadequate.

Peep sights won’t work on every action, and in my hunting-rifle configuration, I wouldn’t shoot them past 200 yards. But given the choice between standard buckhorn sights and many of the unremarkable unmagnified reflex sights on the market, peeps are an option that deserve to return from obscurity.

This sight has a low profile for an unobtrusive look. It is designed to go with Talley’s excellent scope bases, which have two recoil shoulders milled into them, meaning that once the peep sight is secured, it isn’t going anywhere. The aperture provides a crisp, clear picture of the target and front blade, allowing for fast shooting. This system lets you easily switch to a scope wearing Talley QD rings as well. ($69; talleyrings.com)

Built to work as a backup on a scoped rifle, this sight has a pop-up aperture that can be deployed once the scope is removed. In the down position, it sits low enough to give the scope tube adequate clearance. It is fully adjustable for windage and elevation. For optimum low-light performance, consider pairing it with one of Brockman’s front sights with a Tritium insert. ($150; brockmansrifles.com)