Get your tactical on with SureShell Shotshell Carriers and Optics Rail Assemblies by Mesa Tactical, now offered for the Mossberg... 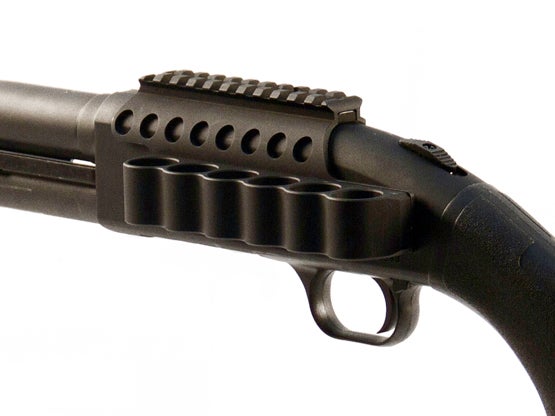 Get your tactical on with SureShell Shotshell Carriers and Optics Rail Assemblies by Mesa Tactical, now offered for the Mossberg Model 500 and Model 590 pump-action shotguns. Carriers and rails are made of hard, anodized aircraft aluminum.

The SureShell shell carrier and rail assemblies feature four, six or eight-shell shotshell yokes fitted to a bracket incorporating a Picatinny optics rail. The rail brackets are secured to the receiver using the optics rail mounting holes factory drilled and tapped into Mossberg receivers. The optics rail stretches most of the length of the shotgun receiver.

In addition to these standard 4½-inch rails, Mesa Tactical adds the option of four, six and eight-shell carriers with 20-inch rails. The full-length rails allow the use of back up iron sights as well as optics, and are supported at the front by Mesa Tactical’s new Magon™ magazine clamps.

You can also buy the full length rail with the shell carrier.