Wilson Tactical is rolling out a new cartridge for the AR-platform, the WT 7.62X40. This is a .30-caliber cartridge that... 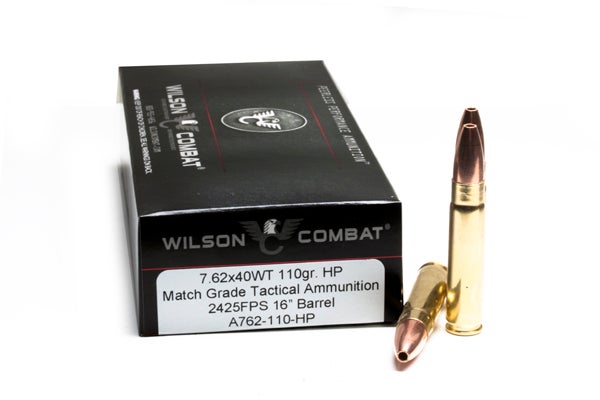 Wilson Tactical is rolling out a new cartridge for the AR-platform, the WT 7.62X40. This is a .30-caliber cartridge that is designed to run in AR-15 sized receivers. Wilson Tactical is billing it as a low-recoil round with improved ballistics over the 5.56 NATO/.223 Rem. that would be suitable for some tactical applications but also, significantly, as a moderately-powered cartridge for big game.

Does this sound vaguely familiar? Yes, it was the same goal set out by the .30 Remington AR round, which launched to some fanfare a couple years ago but has settled into semi-obscurity since then.

Why, then, would other gun makers try to re-plow this seemingly unfertile ground? It’s really an offshoot of the limitations of the AR platform. As much as the Modern Sporting Rifle–a silly name for a 50-year-old design–has been hyped as a hunting rifle, it is still a work in progress. ARs are heavy, loud, awkward to carry and when compared to the lines of a stylish bolt-action rifle are as graceful and sleek as a box tortoise.

Some good efforts have been made to make ARs more suitable for big game use, but they ain’t there yet. I love using them for varmint and predator hunting but they aren’t good enough yet to qualify as my “go-to” gun for big game.

Here are the specs on the new Wilson cartridge:

Project Goal
Develop an inherently accurate and low recoil cartridge in the immensely popular .30 caliber that has more terminal effectiveness than the 5.56 while utilizing as many standard AR platform 5.56/.223 components as possible.
**
Cartridge Application**
Designed for tactical/defense applications as well as hunting for medium-sized game such as deer and feral hogs. The 7.62×40 WT (Wilson Tactical) has very useful tactical applications with soft point and hollow point bullets providing reliable terminal performance on soft tissue while the Barnes TTSX will easily penetrate tough barriers. For hunting the 7.62×40 WT vastly out performs the 5.56 and is on par with the 6.8SPC at ranges out to 175-200 yards. The VERY mild recoil of the 7.62×40 WT also makes it ideal for female and younger shooters as well as anyone that’s recoil sensitive.

Cartridge Specifics
The 7.62×40 WT is based on the inexpensive and readily available 5.56×45 Nato cartridge case. The 5.56 case is shortened to 1.560″ and then re-sized (single operation) in a standard 7.62×40 WT sizing die which results in a formed 7.62×40 WT case with a finished overall case length of 1.565″. The cartridge is designed for 110-150gr .308″ diameter bullets loaded to supersonic velocities, but if chambered in a 1-8 twist barrel is also suitable for heavy bullet subsonic use also.