A hot half dozen new ammo introductions for this year 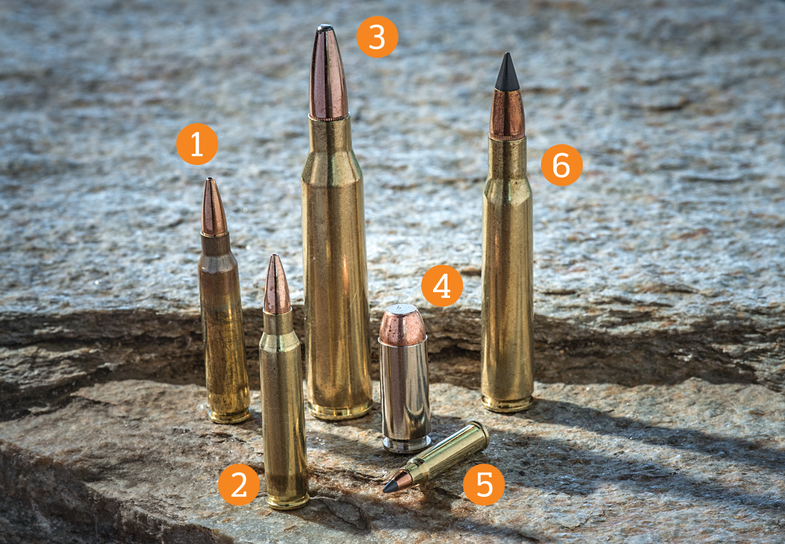 1. Black Hills 5.56 70-Grain GMX
This year, Black Hills is adding a new heavy-bullet load to its 5.56 NATO lineup. The 70-grain Hornady GMX is a monolithic expanding bullet that’s earned a good reputation among hunters for reliable expansion and nearly 100 percent weight retention. With this heavy-for-­caliber bullet, the 5.56 will penetrate deep and create a large wound cavity on deer and hogs. Black Hills says that penetration in ballistic gelatin consistently runs 17 to 22 inches, with a wound diameter in the 5-inch range. Recovered bullet diameter averages nearly half an inch. The bullet needs a rifling twist of 1-in-8 inches or faster to stabilize. ($80/50 rounds)

2. Barnes Precision Match
Barnes has been loading precision ammo for military snipers for several years. That ammo is now being offered to civilian shooters.

The new Barnes Precision Match ­Ammunition is engineered for extreme accuracy and long-range performance. Barnes uses only the sleekest bullets with high ballistic coefficients and maintains unusually high levels of quality while assembling the ammo.

The 69-grain 5.56 load shot ½ MOA groups from my AR-15 rifle. Friends who shoot competitively and who have tested the Barnes Precision Match ammo at extreme ranges have nothing but good things to say about their experiences in the field with it.

3. American Eagle .338 Lapua
Long-range shooters love the .338 Lapua cartridge. What we don’t love is the $5-plus it costs every time we pull the trigger.

The new American Eagle .338 Lapua ammo has a street price of about 60 bucks for a box of 20 rounds. It’s loaded with 285-grain Speer Hot Core bullets, which are not only accurate, but will also be perfect for hunters using the .338 Lapua. ($67/20 rounds)

4. Federal Premium Vital-Shok Trophy Bonded 10mm Auto
Handgun hunting for big game has been the domain of revolvers and single shots for years, but now you can add semi-autos to the mix. While 10mm cartridge was developed for use in a semi-auto handgun for self-defense, Federal is now loading it with a hunting bullet.

The Federal 180-grain Trophy Bonded bullet in 10mm has a muzzle velocity of 1,275 fps in 10mm. It generates 650 foot-pounds of muzzle energy, which puts it between the .357 Magnum and the .41 Magnum in performance, making this new 10mm load suitable for hunting deer, hogs, mountain lions, and similar size game. ($39.95/20 rounds)

6. Winchester Deer Season XP
This new ammo from Big Red is all about the bullet, the first Winchester has designed specifically for deer. The key is the Extreme Point polymer tip, which is larger and seated deeper into the bullet than a traditional polymer tip, so that the hollow cavity underneath is much bigger than in other bullets. That’s matched with a tapered bullet jacket to control expansion and a soft, swaged lead core for rapid expansion. Deer Season is available in all the popular deer cartridges, and is priced only slightly higher than bargain ammo. ($22/20 rounds)