The New Face of African Hunting

_Editor’s Note: This is part 1 of a three-part series on trophy hunting in Africa. See part 2 here. _... 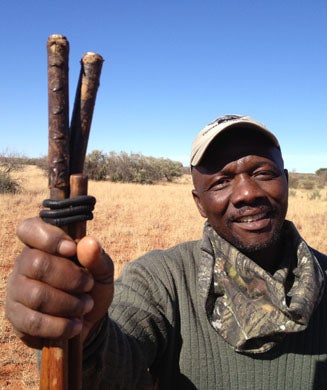 _Editor’s Note: This is part 1 of a three-part series on trophy hunting in Africa. See part 2 here.
_

In Zimbabwe, it is called “land reform,” the forced redistribution of white-owned farmland to majority blacks. The government-sponsored theft, often at the muzzle of a Kalashnikov, has resulted in the collapse of the economy and Zimbabwe’s rural culture. It has blighted some of the continent’s most fertile land and eradicated some of the most storied wildlife populations in the world.

And it could be coming to neighboring South Africa.

That’s the fear among a growing number of South Africans, who worry that the majority black government, in an effort to bolster grassroots support and address unrest in sprawling tin-shack townships, could start to redistribute land that has been owned by white families for two centuries.

There would be many victims of such a move, but surely one would be the abundant wildlife and the tradition of wildlife stewardship that has made South Africa a destination for trophy hunters, photo-safari tourists, and wildlife managers.

Instead of forced distribution of white-owned land, why not involve more black Africans in the wildlife economy, say some forward-thinking South Africans.

“Who benefits from sport hunting right now? The white, Afrikaans-speaking elite,” says Theresa Sowry, president of the Southern African Wildlife College in South Africa’s Limpopo Province. “Here in South Africa, sport hunting has an image problem. It’s perceived as a case of the rich getting richer with little benefit to local communities.”

If wildlife advocates want to broaden the appeal of sport hunting among the nation’s majority blacks–who vote in large numbers–then they need to introduce the idea of sustainable wildlife management, often funded by international hunters, to a new demographic: black Africans.

And that work is starting to change the face of hunting in the country. Yes, you are still more likely to have as your PH (short for professional hunter, the guide and leader of any hunting expedition) a white man whose father was likely also a PH. But increasingly, blacks are rising to positions as guides and trackers and even concession owners.

Sowry’s college has started a 2-year intensive training course for professional hunters, and is recruiting black students to enroll in the college. Elsewhere, scholarships are available for blacks to train as trackers, wildlife managers, game wardens, and support staff on game ranches. And white PH’s themselves are sponsoring apprenticeships for blacks to join their ranks.

What does this mean for the future of hunting in Africa? I traveled to South Africa, and to neighboring Namibia, last month to find out.

I flew first to South Africa’s Northern Cape Province to hunt with Hans Vermaak. “Scruffy,” as everyone calls Hans (“Scruff,” if you’re trying to be familiar), is the son of Coenraad Vermaak, the oldest operating outfitter in the nation and a founder of the Professional Hunters’ Association of South Africa, or PHASA.

Ben Carter, executive director of the Dallas Safari Club, who joined me in Africa, had told me that Scruffy is one of the new generation of PHs who are interested in encouraging blacks to join the profession, so I was a little startled to learn we’d be hunting a property closely identified with the colonial-era Afrikaans and the country’s apartheid era.

This ranch, Rooiport Game Reserve, is the former Cecil Rhodes estate, now owned by the DeBeers family of diamond fame and fortune. Located just west of Kimberly, site of the first “big dig” for diamonds in the former Rhodesia (named after Lord Rhodes, who also funded the famous Rhodes Scholarship), Rooiport is the heart of South Africa’s wildlife ranching tradition.

Rooiport was large enough, and contained enough varied habitat, to sustain plains game during the settlement era when most African wildlife was either eliminated or pushed to areas that later became national parks. Rhodes was an early enthusiast for hunting and for Africa’s antelope, and he protected large herds of zebra, red hartebeest, both blue and black wildebeest as well as ostriches, springbok, impala, and other signature species of South Africa.

The nature reserve, which hosts photographic safaris, wildlife research, and sport hunting, stretches over 110,000 contiguous acres along the Vaal River. It occupies the intersection of three important biozones, the dry karoo (brushy plains), the drier Kalahari Desert, and South Africa’s interior grasslands. When game ranchers across the country need infusions of animals to supplement their herds, they call Rooiport.

We got a glimpse of the grand history of Rooiport during a brief tour of Rhodes’ “Shooting Box,” a simple square lodge imported plank by plank from England, brought ’round the Cape during days of the mast. The structure was decorated with restrained elegance–prime ministers, captains of industry, the elite of the British Empire had been entertained here–but what caught my eye was a large map of the property, illustrated by hand, hanging above the fireplace.

My eye settled on a part of the property not far from the Shooting Box. “Vogelstruis Pan,” it was called, and decorated with a pair of bucking black wildebeest and a couple of springbok.

Elsewhere on the annotated map I saw eland, kudu, red hartebeest, the full spectrum of southern Africa’s plains game. This is my kind of map, I recall thinking, obviously drafted by a hunter, for hunters.

“All our animals are native to this property,” says Scruffy. “We don’t bring in wildlife. It leaves here only to repopulate other areas. Or to go to a taxidermist.”

Late in the day, I managed to introduce a remarkable black wildebeest to a taxidermist. We spotted several promising bulls, but every time either the wind or a sharp-eyed ostrich blew our stalk. Finally, toward the end of the first day at Rooiport, we spotted a herd of wildebeest grazing in a dry lake bed, called a “pan.” We crawled to the edge of the wide-open pan, then slithered on our bellies through grass to get within 300 yards of the wildebeest.

As I slid along the ground, I noticed first one, then several ancient rifle cartridges. I must have crawled over a dozen of these crumbling brass shells — a mix of .375, 8x68mm .308, 7x57mm from what I recall — evidence that other hunters of previous generations had the same experience I was having. Then I realized where I was, slinking along the edge of Vogelstruis Pan, creeping on wildebeest whose ancestors have been grazing here for millennia.

We could get no closer than 300 yards, so I set up my .300 Win. Mag. on my pack and held on the bull’s back. The wildebeest dropped at the shot and I stood up, finally able to soak in the entire spread of the pan. In the background, huge herds of blesbuck, impala, springbuck, and blue wildebeest grazed in the gathering dusk. It was like hunting Yellowstone Park’s Lamar Valley, so rich in wildlife was this particular real estate.

As we prepped the bull for sunset photos, getting help from black tracker Robert Mdlolo, Scruffy told me about his goal to integrate hunting in Africa.

“This country is full of people who have undeveloped talent, especially in field skills,” he said. “But most have never had even the glimpse of a chance to develop that talent.”

He told me that tomorrow I’d be hunting with his colleague and fellow PH, Patches.

“Patches can’t read or write. He’s a regular Zulu tribesman from Natal. Grew up in the bush keeping his dad’s cattle safe from leopards and crocs. But if he had had a proper education, he’d probably be my boss.”

Patches climbs a camelthorn tree to find the herd. We have been tracking a rambling band of red hartebeest since sunup, but they’ve disappeared among the thornbush of Rooiport’s upper country.

From his perch, Patches finds the herd, but climbs down to warn me that we will have to stalk between a wary ostrich and a herd of gemsbok. Can I crawl? he asks me. Oh, yeah, I say. He smiles.

Almost immediately, I recognize Patches has a combination of skills I’ve never seen in Africa, in either my previous white PHs or my black trackers. He is attentive to my comfort and has an easy authority with his black trackers and with me – both attributes of good professional hunters. But he’s a genius tracker and easily anticipates the movements of animals, and I sense he could track a butterfly across a parking lot.

We stop crawling to catch our breath and glass. How did he get his nickname, I ask.

“Back before I met Coenraad, I was a tracker for a PH who did a lot of leopard hunting,” Patches said in his accent that contains hints of Zulu, Portuguese, and Afrikaans. “One night, I was waiting at the truck when I heard a shot from the blind. I waited and waited, but our radios were broken, so when the hunters didn’t come, I walked to the blind. The PH didn’t hear me approach. I scared him when I appeared out of the night. He said I was quiet as an Apache Indian.”

As we hunted together, I learned more about Patches’ transformation from a bushman to a tracker to a PH. Scruffy was so impressed by Patches’ abilities that he paid for him to attend four 2-week PH training courses, and also lobbied the government to allow the PH exam to be tendered orally as well as in writing so that trackers with little formal schooling might be able to pass it.

Patches did pass it, and has been a commissioned PH for a few years now.

After crawling for most of the morning, we gave up on the hartebeest we had been trailing and looked for more promising prospects. Later in the day we found one, a bull sleeping in the shade of spreading blackthorn tree. We crawled, the bull awoke, we tried several shot opportunities, but the hartebeest kept moving away, then joined three other bulls. Finally, I had a shot and made it.

After we loaded the bull into the Land Rover, Patches asked if I wanted to see evidence of Rooiport’s original hunters. We drove to a shallow wash, then got out and walked to a pool of standing water–the first I’ve seen here in this dry season. Patches pointed to the rocks. All around the water hole were flat boulders with pictures of African animals stenciled in their surfaces.

It was Bushman art, evidence of hours and years and probably centuries of hunters waiting to ambush game around this water hole, patiently scratching into flat rocks the images of the animals they hoped to kill.