Why Giggles Needed to Die

The mainstream media is in a frenzy over the killing of a fawn whitetail that animal shelter workers had named... 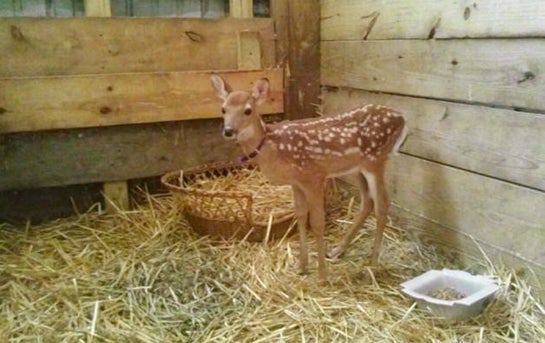 The mainstream media is in a frenzy over the killing of a fawn whitetail that animal shelter workers had named ‘Giggles.’

The Society of St. Francis Animal Shelter in Kenosha, Wisc. took in a 35-pound fawn that had been abandoned in Illinois. “The workers named her Giggles after an endearing laugh-like noise she would make,” according to the Daily News.

The shelter took care of Giggles for two weeks until 9 Department of Natural Resources agents and 4 sheriff’s deputies arrived with a warrant. They sedated the deer, took it from the shelter, and euthanized it.

The agents killed the deer because the shelter did not have a proper permit for keeping wildlife. The deer was also illegally transported across state lines. But still, many argue that the state overreacted.

“This was like the Gestapo coming in,” shelter president Cindy Schulze told the Daily News. “Giggles didn’t pose any threat. She was petrified! She wasn’t even sick. There was no reason to kill her.”

What Schulze and the media are failing to realize is that Giggles could have been a threat. Wisconsin has been battling chronic wasting disease for more than a decade, without much success. This spring, officials found that CWD’s annual growth rate has reached 27 percent in Iowa County (the new ground zero for the disease). One out of every 3 bucks that were at least 2 1/2 years old were infected.

It’s no secret that captive deer are one of the biggest cwd transmission threats, and facilities that keep deer are regulated by the Wisconsin agriculture department and the state DNR. The Society of St. Francis Animal Shelter did not meet those regulations.

Shulze told the Huffington Post that they had planned to send the fawn to an Illinois wildlife rehabilitation facility. But then what? Would Giggles have been released into the wild in Illinois as an adult? Nobody wants the unregulated transport of whitetails between two cwd-postitive states.

So, the use of 13 government agents for one deer was maybe a little overkill. But, the state needs to continue regulating captive deer with an iron fist, and any deer that are found in facilities that don’t meet regulations should be euthanized. The health of wild deer needs to take priority over captive deer.

And here’s one final thing to consider: Why ‘rescue’ Giggles in the first place? Aren’t whitetails meant to live and die in the wild?