The New York Giants defensive end is a bowhunter with Dixieland roots. Here’s his take on bows, balancing football with... 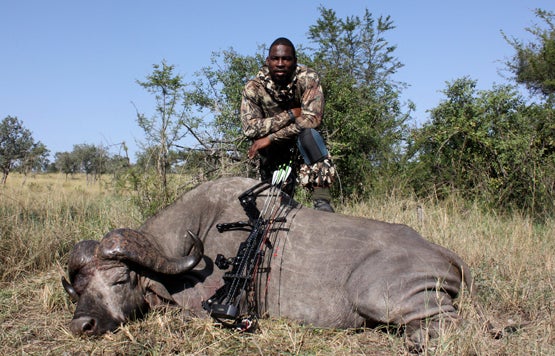 The New York Giants defensive end is a bowhunter with Dixieland roots. Here’s his take on bows, balancing football with hunting, and living in the big city…

▶ I’m originally from Alabama and I grew up hunting rabbits and deer. But I was always playing sports as a kid and wasn’t as passionate about hunting as I am now. It wasn’t until college that I really got into it.

▶ Hunting with a rifle was a little too easy for me. The challenge of bowhunting, getting 20 yards away from an animal, is just really unique.

▶ The coolest hunt I’ve ever been on was a bowhunt in Africa two summers ago. I shot a buffalo with a bow, plus hartebeest, hyena, zebra, and wildebeest. My wife and I took a total of 12 animals on the trip. It was all spot-and-stalk, and it was kind of crazy, to be honest with you.

▶ Hunting is a competitive sport in itself. It’s not me against the quarterback, but me competing against an animal in its own environment. Most pro athletes are adrenaline junkies, and hunting–with a buffalo in bow range staring me down–is one of the biggest adrenaline rushes I’ve ever had.

▶ Being a hunter living in New York City gets me into some interesting situations. I’ve had times where guys are like, “Cool! That’s awesome that you hunt.” And then I’ve had guys say, “You need to stop doing that.” But once I get talking to them about why hunting is important for conservation reasons, they usually understand why I do it.

▶ It’s tough with the football season being in the fall. I miss out on a lot of big-game hunts I’d like to go on. But we’re lucky and usually get a bye sometime after Halloween, so I get to go deer hunting. I told my wife that after I retire, she should expect to not see me for six months out of the year.

▶ I love Mathews bows and I love Hoyt bows, and I couldn’t decide which one I shoot better, so I use them both. I draw 70 pounds. I could easily pull more, but there’s usually no reason to. I did shoot the buffalo with a draw weight of 95 pounds. The arrow went right through him.