That’s Joel Rotz from the Farm Bureau, and next to him is the guy from the Pennsylvania Equine Council,” whispered... 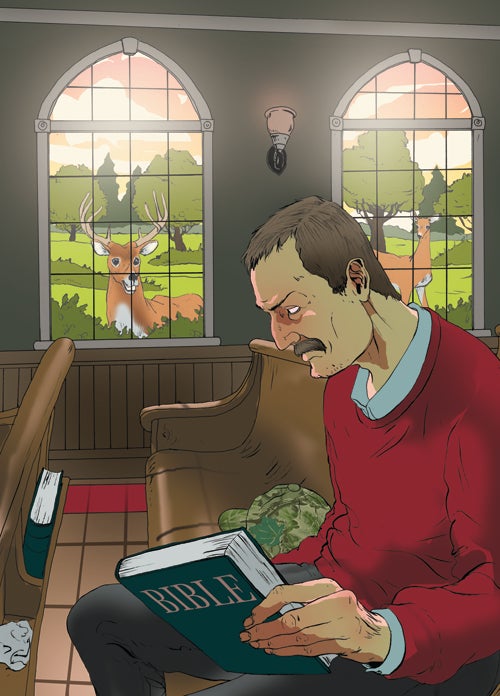 That’s Joel Rotz from the Farm Bureau, and next to him is the guy from the Pennsylvania Equine Council,” whispered Monica Kline as we sat in a dimly lit, wood-paneled hearing room in the Pennsylvania State Capitol building in Harrisburg on a drizzly morning late last October.

We were awaiting the start of a public hearing before the state House of Representatives Game and Fisheries Committee, and Kline, a lobbyist for the U.S. Sportsmen’s Alliance, was identifying for me the gathered opposition to House Bill 1760, which would overturn Pennsylvania’s Sunday hunting ban. “That’s the guy from the Keystone Trails Association, and those women over there are from the Humane Society.”

Among those testifying in support of overturning the ban that day last fall were representatives from the Congressional Sportsmen’s Foundation, the U.S. Sportsmen’s Alliance, and the Quality Deer Management Association, as well as Pennsylvania Game Commission executive director Carl Roe.

While the organizations aligned in favor of overturning the hunting ban shouldn’t raise any eyebrows, what is interesting, and somewhat perplexing, is that House Bill 1760 is seemingly dead in the water today due to a lack of support from both Republican lawmakers and a sizable contingent of the Keystone State’s dyed-in-the-wool hunters.

Economic Impact: There are currently 11 states where hunting on Sundays is either prohibited or restricted. All are in the East (Connecticut, Delaware, Maine, Maryland, Massachusetts, New Jersey, North Carolina, Pennsylvania, South Carolina, Virginia, and West Virginia), and the prohibition has its roots in Puritan-era “blue laws” adopted centuries ago. Ban opponents say giving Sundays to hunters will boost local economies. A 2010 economic impact report indicated that if all 11 states eliminated Sunday hunting restrictions, 27,000 new jobs would be created—paying $730 million in wages and contributing some $2.2 billion in economic activity. In Pennsylvania alone, Sunday hunting would create more than 8,000 jobs paying more than $245 million in wages.

No Help From the Right: So in a state with one million hunters, and with so much of a financial upside to overturning the Sunday hunting ban, why is Pennsylvania House Bill 1760 in what Evan Heusinkveld of the U.S. Sportsmen’s Alliance refers to as a holding pattern? “Republican lawmakers found themselves in a crossfire between two traditional allies: sportsmen and farmers,” he explains. “Because voting yes or no would alienate a significant portion of their base, many preferred that the bill never receive a vote.”

Hunters Divided: You wouldn’t think that hunters themselves would oppose a bill to create more hunting opportunity. But in the crowd at Harrisburg on the day of the hearing last fall, a number of hunters in well-worn camo jackets had come to let the committee know that they had no interest in seeing the Keystone State’s ban on Sunday hunting overturned. Heusinkveld says the opposition comes mainly from two quarters: older hunters who don’t need Sundays because they’re already hunting most other days of the week, and rural hunters who don’t want “weekend warriors” from cities and suburbs horning in on their leases and public lands.

“It’s a shame,” says Heusinkveld. “One of the biggest national issues we face as hunters is creating more access. Here’s a chance to literally double most hunters’ access, just by allowing one more weekend day in the field, and we have opposition from our own ranks. It’s short-sighted.”