Photo by Brian Grossenbacher Avoid these bad habits to hit more birds. 1. Losing Focus To be a successful shotgunner,... 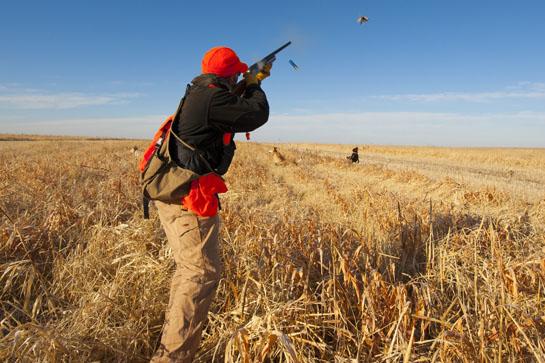 1. Losing Focus
To be a successful shotgunner, you must stay focused on the bird throughout the shot. If your eyes bounce from the bead to the target, you’ll interrupt the swing of the gun and miss. Keep your eyes on the target to keep the gun moving.

2. Bad Gun Mount
When mounting the gun, bring the stock to your face–don’t drop your head to the stock. If the recoil pad snags on your clothing, practice pushing the gun out slightly with your arms before bringing it back into your shoulder. Keep your cheek welded to the stock, and move your whole upper body when swinging the gun.

3. Not Finding the Bird Early Enough
Neither clay targets nor wild birds give you much time to dawdle, so learn to pick your target up quickly. On the trap range, that means watching the front of the house; in skeet, you’ll want to bring your eyes back halfway between the center post and the house that the bird will be coming from. When hunting birds, pick one bird out of a covey and remained focused on it instead of being distracted by a dozen drumming wings.

4. Poorly Positioned Feet
The best shotgun shooting position requires two things–a solid platform and the ability to move with the target. There are a variety of shooting styles, but the most common stance requires that the feet be about shoulder-width apart, with the foot opposite the shooting hand positioned slightly ahead. The majority of your weight should be on the front leg, and the knees should remain bent. The stance should feel comfortable and natural, providing you with both stability and the capacity to twist the upper body freely.

5. Squeezing the Gun
A smooth swing is vital for good shooting. To achieve this, your muscles must be relaxed–gripping the shotgun tightly with either hand is certain to cause your swing to become choppy. Hold the forend as if you were holding an egg. The grip should be firm but not hard enough to break the shell. The same applies to the pistol grip. Contracted muscles impede swing and won’t allow you to track the target. This is particularly important when you’re hunting wild birds, like doves, that rise, drop, twist, and change speed.

6. Becoming a Slave to Sustained Lead
“Sustained lead” refers to a specific distance that the muzzle of the gun is held in front of a crossing target to break that target. The problem with sustained lead is that it requires you to try to gauge distance while simultaneously tracking the target with your eyes and keeping the gun moving. Instead, try to swing through. Keep the gun moving, catch the target, and fire as the gun passes it.

7. Not Following Through
This is shotgunning’s golden rule: No matter what, always keep the muzzle of the gun moving even after you shoot, whether you break the target or not. If you miss, follow the target to the ground, and do the same for wild birds that get away. Swinging through the target forces you to keep the gun moving. Resist the urge to stop the gun when you pull the trigger. By following through, you eliminate the possibility that your misses are a result of lifting your head from the stock at the shot.

Don’t Make These 5 Etiquette Mistakes at the Range

1. Keeping your action closed. A closed action makes everyone nervous, and rightly so. Keep it open until you are ready to shoot.

2. Wasting time.
Don’t wait until you are supposed to be shooting to open a fresh box of shells and start stuffing them in your pockets.

3. Fiddling with your gear. Continuously adjusting your equipment slows everyone down.

4. Talking while others are shooting. Don’t be that guy.

5. Getting discouraged. Trap, skeet, and sporting clays are supposed to be fun. If you have a bad outing, take a deep breath and sign up for a lesson.