Many hunters start out by chasing squirrels, only to be lured away by larger and more glamorous game. However, as... 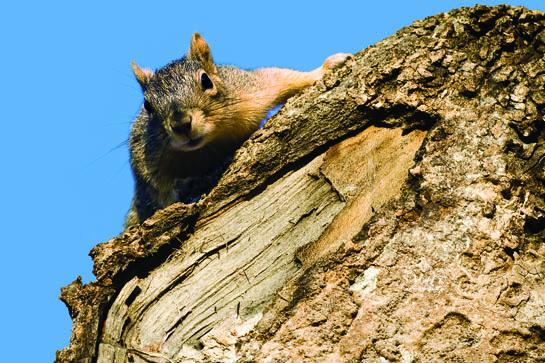 Many hunters start out by chasing squirrels, only to be lured away by larger and more glamorous game. However, as the leaves begin to change and the temperature drops, squirrels seem to appear in the limbs and crotches of every tree, reminding us how much we used to enjoy hunting them.

1. The Restless Hand
Squirrels have a natural inclination to remain still when predators approach. If you find yourself sitting in an area that should be productive–namely, beneath an oak tree–drop your hand into the litter and stir the leaves at random intervals, repeating in a broken pattern. The sound of your hand moving in the leaves imitates the sound of a squirrel that has started feeding, encouraging all the other squirrels in the area follow suit.

2. Up a Creek
You’ll often find abundant, unpressured squirrels along creeks and streams bordered by hardwoods, particularly oak, hickory, sycamores, and ash trees. If you minimize movement in your canoe or kayak and keep your eyes open, you can have fast shooting on squirrels that don’t expect danger to come from the water. If you are with a buddy, mandate that only one of you shoots at a time, and only from a sitting position.

3. Spot and Stalk
Squirrels are most active during daylight hours, and a morning or evening stalk through the woods can prove very productive. The first step is to scout areas where squirrels are likely to be found, which is anywhere the mast crops they eat—mainly acorns, beech, and hickory nuts—are present. With the sun at your back, practice walking very slowly, taking two or three steps at a time. Keep your eyes peeled and be ready to pick off the squirrels that didn’t hear your approach.

4. The Right Dog
Allen Franklin’s mountain cur squirrel dogs hunt by sight and scent, treeing squirrels and then sounding the location with a series of short “chop” barks until the hunter arrives. Squirrels instinctively flare to the side of the tree opposite a predator, and a circling dog encourages the squirrel to move around the trunk and branches, offering the hunter a shot. Additionally, dogs catch wounded squirrels that fall from the tree, preventing lost or wounded animals.

Gray Squirrels
The most common member of the family, the eastern gray squirrel is found from New England to the Great Plains, and the closely related western gray squirrel is native to the Pacific Coast. Eastern grays–which may actually be black, white, brown, or gray–are medium-size tree squirrels, found in forest and urban habitats.

Abert’s squirrels
Easily identified by their long, gray-black ear tufts, Abert’s squirrels are closely associated with ponderosa pine forests in the western and southwestern United States. This species is unique among tree squirrels in that they do not store food. Instead, they eat different parts of pines–­including needles, bark, and cones–­depending upon the season.

Pine Squirrels
This group includes red, pine, and Mearns squirrels, found in the western part of the U.S. The smallest of the tree squirrels, their diet consists of pinecones and seeds normally stored beneath the den tree. They are among the most vocal of all members of the Scuiridae (or squirrel) family, so once your cover is blown, all their neighbors will know.

Ithaca Model 37: Ithacas have been made in the U.S. since the 1880s, but the current lineup of 28-gauges are perhaps the company’s best pump guns ever. ($999 and up; ithacagun.com)

Browning Buck Mark Contour 5.5 URX .22 LR: Accurate and reliable, this autoloading .22 is a well-balanced target pistol that comes with iron sights and an optic rail. ($540; browning.com)

Ruger 10/22: The 10/22 has earned a reputation for reliability, accuracy, and dependability. It’s available in a variety of flavors, including a new synthetic takedown model. ($279-$529; ruger.com)