If spring fever has motivated you to seek out a unique outdoor adventure this month, look no further than California’s... 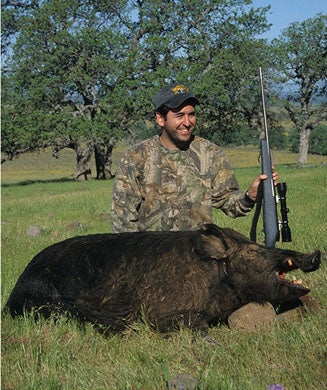 If spring fever has motivated you to seek out a unique outdoor adventure this month, look no further than California’s Central Coast, namely San Luis Obispo, Monterey, and San Benito counties, which are home to California’s highest concentrations of wild hogs. Match a hog hunt with mixed-bag warm water fishing at a Central Coast lake and you’ll have the ingredients for a quality fishing and hunting trip.

Second only to deer in terms of harvest numbers, California’s wild hogs are found in 56 of the state’s 58 counties. Unlike in some states where they are considered a pest, California’s wild pigs are bonafide big game animals and a hunting license and tag are required to hunt them. Central Coast wild hogs are a cross between European boar brought here in the 1920s and domestic swine gone wild. They can be hunted year-long with no daily bag or possession limits.

The rugged foothills of the Central Coast provide good action for hog hunters from March until June. During this period, hogs are often concentrated near agricultural areas on private land or rooting for tubers and searching for acorns on public lands. The best hog hunting occurs in the first hour or two after sunrise and the last hour of the day. As temperatures warm up wild hogs become mostly nocturnal, especially where they are hunted regularly, so be ready at dawn, spend most of the day fishing, and then give pigs another try just before sundown.

Spring fishing on the Central Coast is productive and temperatures are generally in the 70s and 80s. Warm weather and increasing day length triggers spawning for some species, while others are now holding near cover and concentrated.

Wild boars are found on both private and public lands, and most hunting is spot and stalk. About 90 percent of California’s wild pigs are taken on private lands where good populations and controlled harvest equate to high hunter success–typically 80 to 90 percent on a two-day hunt. Even hunters with their sights set on a trophy boar with good tusks can count on a 40-percent success rate on the best properties. Most Central Coast private-land hunting is on large ranches where cattle grazing and farming are the primary land uses. Accommodations and meals are often included in the price.

Public-land hunts require significant effort, but wild hogs are found throughout the 1.75 million-acre Los Padres National Forest and on the 284,000 acres administered by the Hollister Field Office of the Bureau of Land Management. This is steep and dry terrain, and hunters must be in shape and carry adequate water in order to hike in and pack out hogs once they are on the ground.

A good alternative to no-cost, low-success public land hunts and private land hunts that can be prohibitively expensive are the controlled hunts on military lands. Fort Hunter Liggett is a 162,000-acre expanse of grassland, oak woodlands, and chaparral 25 miles southwest of King City. Hogs are widespread and hunting success is reasonable. Serious wild pig hunters should avoid the first weekend of deer season (August 9-10) and the dove (September 1) and quail (October 18-19) openers when the area gets crowded. Hunting is available 7 days per week during daylight savings, and on weekends and federal holidays the balance of the year. The area is divided into zones that have hunter quotas. Access is first-come-first-served until zone quotas are met.

A second military base open to hog hunting is 43,000-acre Camp Roberts near Paso Robles. Hog populations are scattered, but hunters who stick with it can be successful. The permit process to hunt on the military bases can be a bit complicated, but the resulting hunting experience is generally worth the trouble.

Another alternative is fee-access private hunting areas. These are unguided hunts and require an annual membership fee to access multiple properties for wild hogs, as well as deer, bear, elk, and small game hunting, fishing, and camping. Wilderness Unlimited currently has about 200,000 acres statewide open to their members. The number of properties and total acreage available is subject to change each year, but traditionally the ranches that support wild hogs in the Central Coast region total at least 40,000 acres.

The Central Coast is home to several lakes that offer quality warm water fishing. While California has suffered from drought and low water levels, three lakes in particular are providing good fishing.

Lopez Lake, east of Arroyo Grande, supports good largemouth and smallmouth bass populations and solid fishing for bluegills, crappies, and catfish. At full pool, it’s 980 acres with three main arms. Try the Arroyo Grande Arm for crappies and bluegills and the Wittenberg and Lopez Arms for bass and catfish.

Located 15 miles northwest of Paso Robles, Lake Nacimiento supports an excellent warm water fishery. At full pool, it’s about 5,000 acres with more than 165 miles of shoreline. Both largemouths and spotted bass are available, as well as crappies and catfish. However, when spring water temperatures reach 58 to 60 degrees, white bass go on a feeding spree chasing schools of shad to the surface. The 1- to 2-pound fighters are a blast on ultra-light tackle rigged with crappie jigs or small spinners. Look for the roving schools in the Narrows, Las Tablas, Dip, and Snake Creek portions of the lake. The lake record white bass is 4 pounds 2 ounces.

Santa Margarita Lake is just off Highway 101, 8 miles east of the town of Santa Margarita. It’s 1,100 acres at full pool and delivers quality largemouth fishing along with good numbers of catfish, crappies, and bluegills. For bass, try the Narrows and Salinas Bay near the dam, and investigate the dock areas and Vaca Flat for panfish.

All the lakes are easily fished from your own boat. Rental boats are available, or you can hire guides that provide boats, tackle, and up-to-the minute knowledge of local fishing conditions.

While it is legal to take wild hogs using bows, crossbows, handguns, shotguns with slugs, and muzzleloaders, most hunters pack a rifle. While any centerfire cartridge can be used, hogs are hard to stop and therefore a minimum of .243 is suggested. Most guides prefer rifles in .300 caliber.

Because the Central Coast region lies within designated California condor range, the use of non-lead bullets is required. Federal, Norma, and Weatherby all make bullets of copper and copper/tungsten material that are approved for use in the condor area.

Bring a variety of rods and reels, including ultra-light spinning gear and conventional bass tackle. Pack your tackle box with topwaters, crankbaits, spinnerbaits, jigs, and plastic worms for bass; crappie jigs; small spinners for white bass; and hooks and weights to drown worms for panfish.

Where to Stay and What to Eat and See

A variety of accommodations and restaurants are available in Paso Robles, Atascadero, and San Luis Obispo as well as several lakeside establishments. If you book a guided wild boar hunting trip accommodations and meals are often included.

If you plan to bring a spouse, Hearst San Simeon State Historical Monument is home to Hearst Castle with tours offered daily. The Central Coast has several outstanding wineries with tasting rooms open to the public. Add a ruggedly beautiful coastline and several restored California missions and you have a great vacation area as well.