In South Dakota, pheasants and pheasant hunting are more than just a pastime. They are an institution. Their history in... 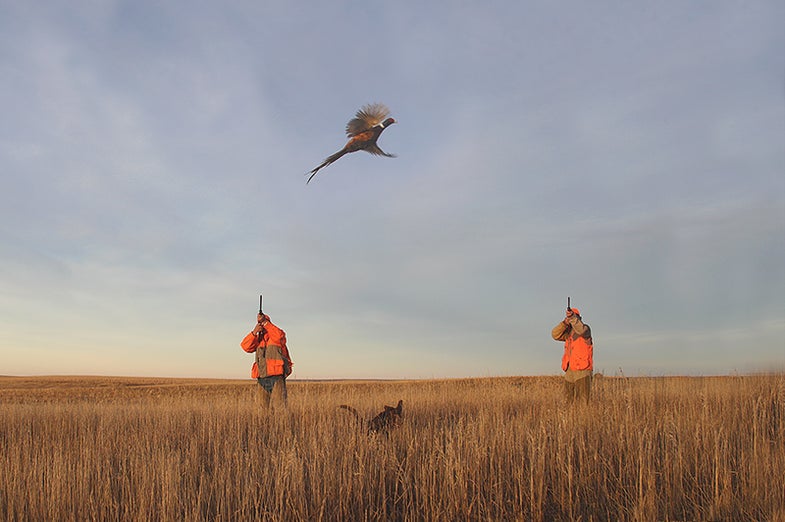 In South Dakota, pheasants and pheasant hunting are more than just a pastime. They are an institution. Their history in the Mount Rushmore State began in 1898 when pheasants were first introduced. In 1919, the first season was authorized and in 1943, the pheasant became South Dakota’s state bird. By the late 1940’s, the estimated pheasant population hit nearly 20 million birds.

For the past half century, pheasants have been cyclic with their numbers and harvest tied to the farm programs that allow lands to remain fallow. The more land left idle and allowed to revert to native cover, the more pheasants and the better the hunting. The Soil Bank Program of the 1950s and 60s, along with the Conservation Reserve Program that started in the 1990’s and remains in effect today, all spawned ringneck increases. Today their numbers are strong and South Dakota remains the number-one state when it comes to pheasant harvest.

Right in the middle of some of the best pheasant hunting is the Missouri River. Lakes Oahe and Sharpe near Pierre were formed when the Missouri was dammed back in the 1950s and 1960s. Today both reservoirs support accessible and excellent walleye fisheries.

The 2014-15 pheasant season is set to run from October 18 to January 4. Limits are three roosters daily and 15 in possession. From October 18 to 24, shooting time is 12 noon to sunset and from 10 a.m. to sunset for the rest of the season. Shooting hours statewide are based on Central Time. There is a resident-only season October 11, 12, and 13 with hunting allowed only on public lands. The noon-to-sunset shooting hours are in effect with a daily limit of three roosters and nine in possession.

While pheasant hunting can be productive throughout the season, the best action is generally the first few weeks after the opener. This year’s young birds are not yet educated and the adult birds have lost a bit of their wariness since the previous year. As the season progresses, it takes plenty of boot leather, often in heavy cover with a good dog, to consistently put birds in the bag.

Walleye fishing in Lake Oahe and Sharpe is at its best in the spring and fall. In the spring, the fish are in shallow water ready to spawn, and during the fall they feed heavily in preparation for the lean winter months. For the best shot at a cast-and-blast adventure, plan a trip between the opening day of the pheasant season and mid-November. By Thanksgiving, the cold weather has settled in and the fishing drops off. Because of the 10 a.m. or noon pheasant start time, fishing can be arranged as a morning activity with hunting in the afternoon. Keep an eye on the weather—fish when the conditions are agreeable and hunt whenever you can.

Where to Fish and Hunt

Depending on the launch ramp used, access to Oahe and Sharpe is a few miles to 50 miles and beyond from Pierre. The lakes are massive; Sharpe is about 57,000 acres and 80 miles long, while Oahe is 374,000 acres and 231 miles long.

During the fall, walleye are often suspended in 10 to 25 feet of water. If you have a depth finder, look for channel edges and submerged points and concentrate your efforts near these underwater features. Windswept points and areas with a bit of current also are worth a few casts. Some of the best areas on Lake Sharpe are near the West Bend launch ramp; a reliable area on Lake Oahe is close to the Little Bend launch ramp.

The area within a 60-mile radius of Pierre provides some of the best pheasant hunting in the state. The region is a mixture of native prairie and agricultural lands devoted to small grains, alfalfa, and hay with significant acreage of idle farmland enrolled in the Conservation Reserve Program. According South Dakota Game, Fish and Parks, favorable weather conditions this past winter and spring, along with the availability of quality nesting habitat resulted in significant increases in pheasant populations. Survey results show pheasant numbers rebounded the strongest in central South Dakota; especially in the Pierre, Chamberlain, Mobridge, and Winner areas.

The Fort Pierre National Grasslands offers easily accessible public-land pheasant hunting near Pierre. This 116,000-acre block of mixed grass prairie supports good pheasant populations along with greater prairie chickens and sharp-tailed grouse. The area is crisscrossed by dirt roads and is accessible from Highway 83 just south of Pierre. The southeast portion of the Grassland harbors the best pheasant populations.

Other opportunities are available in the “Walk-In Areas.” These are private lands on working farms and ranches that are leased for public hunting by South Dakota Game, Fish and Parks. Access is by foot only and there is no fee to hunt these lands. Statewide, there are about 1.25 million acres enrolled in the Walk-In program.

Conservation Reserve Program areas are open to hunting as well. Other lands where public hunting is permitted include the State Game Productions Areas, Cooperative Hunting Access Areas and Federal Waterfowl Production Areas. As you can see there is no shortage of public hunting opportunities. An explanation of these programs and maps showing their locations are available in the South Dakota 2014 Hunting Atlas (printed and online).

Finally, there are fully guided fishing and hunting trips. They provide accommodations, food, boat/motors, and private-land pheasant hunting over dogs. However, the most important aspect of a guided trip is access to up-to-the minute information—where the fish are biting, what lures to use, and where to find the best pheasant hunting. But this information does not come without cost—be prepared to pay a premium.

Bring either spinning or conventional gear or both. Terminal tackle choices are the ever popular jig-and-minnow combination, bottom-bouncer rigs, small crankbaits, and leadheads with various plastic tails. Both casting and trolling work, but slow down your retrieve or trolling speed and use lures that are a smaller version of what is used during summer. Guided trips include fishing tackle and some outfitters provide terminal tackle on a replacement basis.

When pheasant hunting, be prepared to walk and walk some more. A good dog helps; either a retriever or pointer will increase your odds of success. The weather in October and November is best described as unpredictable—it can be 80 degrees and sunny one day, 50 degrees and cloudy the next day, and 40 degrees with snow and sleet the next. Dress in layers and be sure to pack waterproof apparel.

Where to Stay and Eat, and What to See

A variety of accommodations and restaurants are available in Pierre. If you book a guided trip, lodging and meals are generally included.

Many hunters and fishermen fly into to Pierre. However, I often fly into Rapid City, rent a car, and drive the three hours to Pierre. Mount Rushmore is worth a visit and is less than 30 minutes from the Rapid City airport. Nearby Custer State Park has several lodges and numerous hiking trails, and is a great place to view wildlife. There is an interesting self-guided tour of the state capitol building in Pierre.

Guided trips range from $450/day for a fishing excursion for two anglers to $2,500 and up for a three-day all-inclusive pheasant hunt on private land.