Tips and Tactics: How to Hunt Whitetail Deer

When the air turns crisp in November, hunters celebrate opening day of deer season as though it were a national... 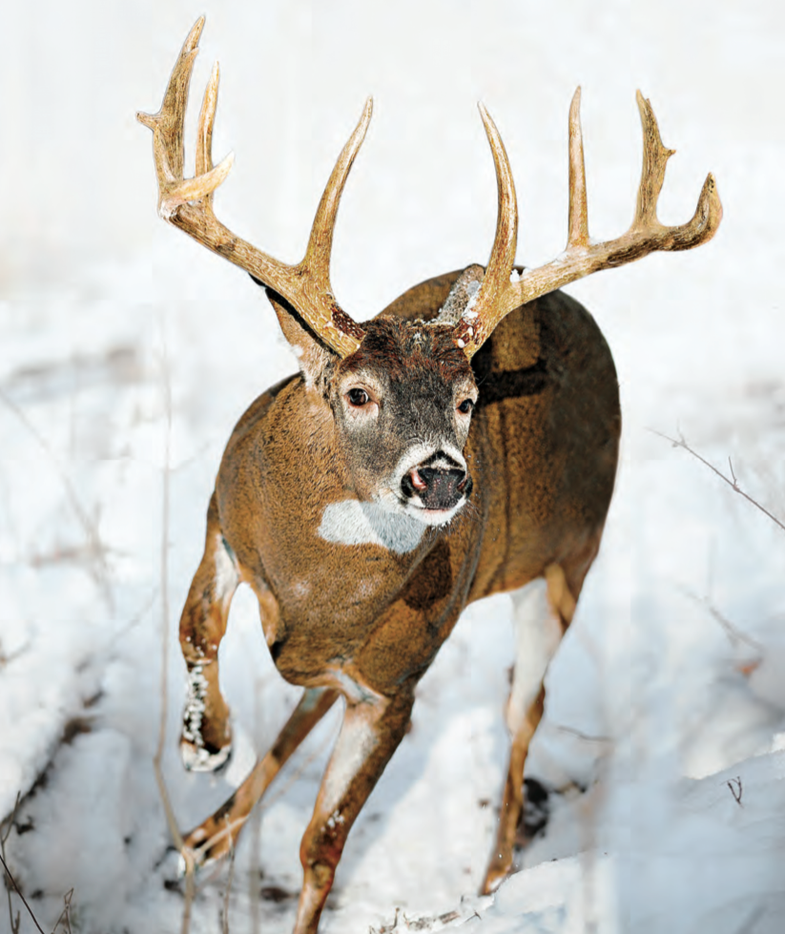 When the air turns crisp in November, hunters celebrate opening day of deer season as though it were a national holiday. In Pennsylvania, schools close. All across the nation, guns boom. Six million deer fall. Rites are passed. Traditions continued. Then, in the offseason, hunters buy gear, study how-to articles, and watch hunting shows. The animal’s economic impact is measured in billions. Why? There is no warier, more adaptable, tastier, or more challenging game animal on Earth. In America, whitetail is king.

      Odocoileus virginianus is purely American, ranging from Peru to Canada. While bespectacled men have attempted to classify whitetails into subspecies, DNA evidence suggests they are genetically identical. But that doesn’t mean they haven’t adapted to environments.

Any traveling hunter who’s stalked a giant Canada whitetail knows they’re bigger—and darker—up there. That’s because whitetails follow Bergmann’s rule, which states animals’ body size increases with its distance from the equator. Coues whitetails of Mexico and the southwestern United States are ash gray in color and weigh 50-125 pounds (23–57 kg). While most whitetail hunters grin proudly with a 135- to 200-pound (61- to 91-kg) buck in the truck, Carl Lenander, Jr., reportedly killed a Minnesota whitetail in 1926 that weighed 403 pounds (183 kg), field dressed!

Savvy hunters know deer’s preferred food changes with the season and crop availability, but less known is how adaptable their diet is. Deer have been observed eating bark, cactus, ants, chicks and eggs from nests, and other oddities. But a ripe acorn from a white oak tree remains the whitetail’s caviar.

The deer gets its name from its flaglike tail that it raises when scared. This communicates danger to other deer—and tells the hunter he’s not sneaky enough. Bucks grow antlers annually, beginning in late spring. The living tissue, covered by a velvety network of blood vessels, is thought to be one of the fastest growing on earth; by September they shed the velvet, revealing hardened antlers used for defense, territorial marking, and fighting. Antler size and configuration vary depending on age, genetics, injury, and nutrition.

On properties where deer are managed for quality antler growth, a debate rages: Some hunters believe yearling spike bucks have inferior genetics and therefore aren’t capable of becoming respectable bucks. They believe spikes are a waste of habitat resources and should be culled. However, research conducted by Texas A&M University suggests that while a yearling spike buck is unlikely to blossom into a Boone and Crockett-caliber trophy, a spike can become a respectable 8- or 10-point—if it’s given adequate age and nutrition.

As wary whitetails expand their range, hunters expand their tactics. Yet the basic methods for hunting remain, with some local variations.

Stand Hunting
The vast majority of the country’s 13-million-plus whitetail hunters use permanent and portable treestands to ambush deer as they travel, feed, and interact. Hunters employ decoys, scents, lures, and calls to bring whitetails into range of their stands.

Stalking and Still-Hunting
The most skilled hunters among us can find, stalk, and kill whitetails in wooded terrain. The Benoit family of Vermont has made their living doggedly tracking big bucks through snow. Other hunters “still-hunt,” or ease through the woods while scanning ahead for deerlike shapes and movement. Damp, quiet ground and a favorable wind are important for still-hunting success.

Spot and Stalk
Western hunters employ this technique in which large expanses of country are scanned and scrutinized for desirable animals. Once they’re spotted, a stalk is made using available cover to creep within gun or bow range. Where the terrain allows, this is an active, highly enjoyable method of whitetail hunting.

Other Methods
In the South, where swamp- land abounds, deer hunting with dogs is a very traditional method. Hounds are let out at one end of thick cover in order to roust hiding deer past hunters lying in ambush. Since most shots are taken while the deer is running, it’s common to use shotguns with buckshot.

Where legal, it’s an exciting and effective method. In some states, like Pennsylvania, “deer drives” are conducted wherein a group of “standers” sneak to line likely deer escape routes, while a group of “drivers” walk through targeted cover to push deer by the standers.

In Texas, corn feeders are used to bait deer into kill zones while hunters wait nearby in elevated “shoot houses.” In the South, the same tactic is used, but distributed corn is substituted for cultivated bean fields. —Jeff Johnston

GEAR UP
All ancient hunters needed in order to take a whitetail was patience, cunning, and skill with a homemade weapon. Modern American hunters don’t live in the woods, however, and most only get a few days to hunt. As a result, our hunting skills have eroded, and we rely more heavily on technology for success. After acquiring an accurate rifle or bow, a few pieces of gear have been proven to make hunting more enjoyable and more successful.

Optics
Quality optics are essential for finding and identifying deer. While hunters can spend thousands on a top-end binocular, they can also purchase an adequate unit for about a tenth of that price. Bushnell’s Fusion binocular includes an integrated laser rangefinder—and the price is reasonable.

Clothing
Modern clothing can make hunters quieter and more comfortable. Gore-Tex, or similarly lined clothing, stops wind and rain while letting body vapors escape so your own sweat won’t soak you. Clothing containing wool, down, or synthetic-fiber insulation keep the head, body, and feet warm so hunters can hunt more and warm up in the truck less.

Treestand
For ambush-style hunters, a commercially manufactured treestand is important for sitting comfortably and safely above the deer’s natural line of sight. Homemade stands can be dangerous if not well maintained.

URBAN HUNTING
As one of the planet’s most adaptable mammals, whitetails have taken to lush suburban areas like sunbathers to Malibu. The suburbs of Washington, D.C., Atlanta, and similar areas offer mild climates, year-round flowery forage, legal protection, and a lack of natural predators. In fact, the whitetail’s biggest threat in these areas is traffic.

Recognizing severe over- population, some game managers have instituted urban archery seasons. In Northern Virginia, homeowners and guests can bowhunt even in tiny backyards. Several counties have antlerless seasons extending nearly to the end of April. 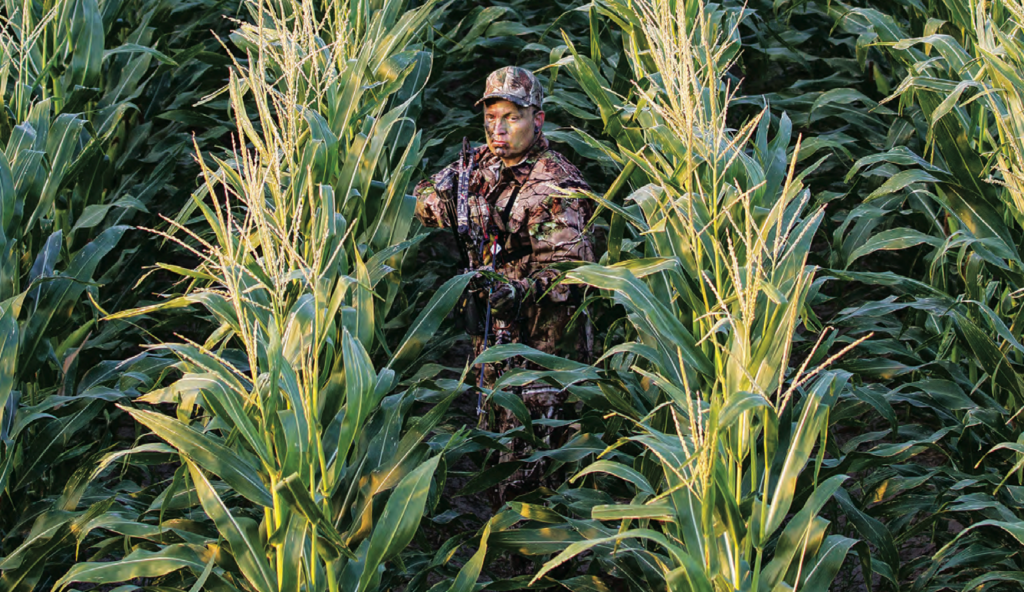 BOWHUNTING MONSTER WHITETAILS
The United States’s surplus of whitetails has afforded hunters the luxury of being choosy. As a result, a legion of hunters has emerged who are only interested in the biggest and most mature bucks—and only hunt them with self-handicapping archery gear. These big-buck fanatics might opt to pass by hundreds of legal deer before finally taking one that meets their standards.
These hunters obsessively pursue the species’ biggest specimens for its challenge. Fact is, getting within 30 yards (or meters) of a mature, free- ranging whitetail is one of hunting’s greatest feats.

Here’s how they consistently put trophy bucks on their walls.

1. Don’t shoot small bucks. If you do, your chance of seeing a monster is diminished, and that deer’s chance to become a monster is destroyed.
2. Hunt areas where monster bucks exist and focus on heavy cover there.
3. Always use the wind to your advantage— and don’t hunt if you think it’s wrong.
4. Hunt the rut hard. Even wise deer make mistakes during this time.
5. Practice shooting in pressure situations to make the shot if/when it presents itself.

THE ULTIMATE HUNT
Conversation at deer camp often turns to the best places to hunt trophy bucks. There’s Texas, where hunters sit and view 50 deer per day at a feeder until Mr. Big shows up. Some love it, but to me, it’s more like deer shootin’ than deer huntin’.

Saskatchewan, Canada, where bucks can weigh 350 pounds (159 kg) and grow headgear to match? Odds for a giant are relatively good, but the Siberian style of hunting in which hunters sit in ground-blind prisons overlooking corn piles in –15oF (–26oC) weather just isn’t appealing.

Kansas, Iowa, Ohio, or Kentucky? Tempting. But a November bowhunt in Illinois’s famed Brown or Adams counties is my deer-hunting heaven. Big bucks don’t prance around in the open often, so you know they’re in the thin fingers of woods and creek bottoms that lace the region’s vast cornfields. Place a treestand in an oak funnel during the rut and get ready; it’s likely your best chance to take a Booner. Bucks scoring over 200 inches (500 cm) are taken here each year. Problem is, finding land to hunt is virtually impossible unless you know someone or are willing to pay. Try Richardson Farms Outfitters of Mt. Sterling and hunt as long each day as you possibly can.

Whitetail Weaponry for Every Season

It’s often said that hunters should respect the man with a single weapon. But for the modern whitetail hunter who must take up multiple arms if he wishes to take advantage of all seasons, the saying is grossly out of date. What follows is a list of weapons that are both efficient and cost effective for every major deer season.

Rifle: Remington Model 700
More than 5 million 700s have been sold—for good reason. Remington’s flagship bolt-action rifle has seen duty in war and in the woods, and the common trait of all 700s is its accuracy. For deer hunters, that means venison.

Shotgun: Savage 220F
Several Midwestern states prohibit the use of rifles for whitetail hunting, so Savage Arms built a shotgun on the same basic design as its renowned rifles. It takes a bolt-action receiver and mates it with a 20-gauge rifled barrel. Add an AccuTrigger and it’s a slug gun capable of 1.5-inch (3.8-cm) accuracy that’s plenty for deer but without undue recoil of a 12-gauge.

Muzzleloader: CVA Apex
This muzzleloader feels more like a modern rifle than any front-stuffer going. It sports lightweight, stainless steel for corrosion resistance, has a quality Bergara barrel for accuracy, and a glorious trigger. I like its rubberized stock that’s quiet in the woods. Take time to experiment with various bullets and charges, and it might shoot 2-inch (5-cm) groups.

Crossbow: Stryker Strykezone 380
The Strykezone is ridiculously accurate thanks to its quality construction and light trigger. I shot some grapefruit-sized groups at 80 yards (or meters). It’s more compact than most crossbows, and therefore less cumbersome in the woods—a huge attribute when hunting whitetails that have ears like radar beacons. With more states allowing crossbows for whitetails, it’s a handy tool to have in the bag.