How to Call Mule Deer 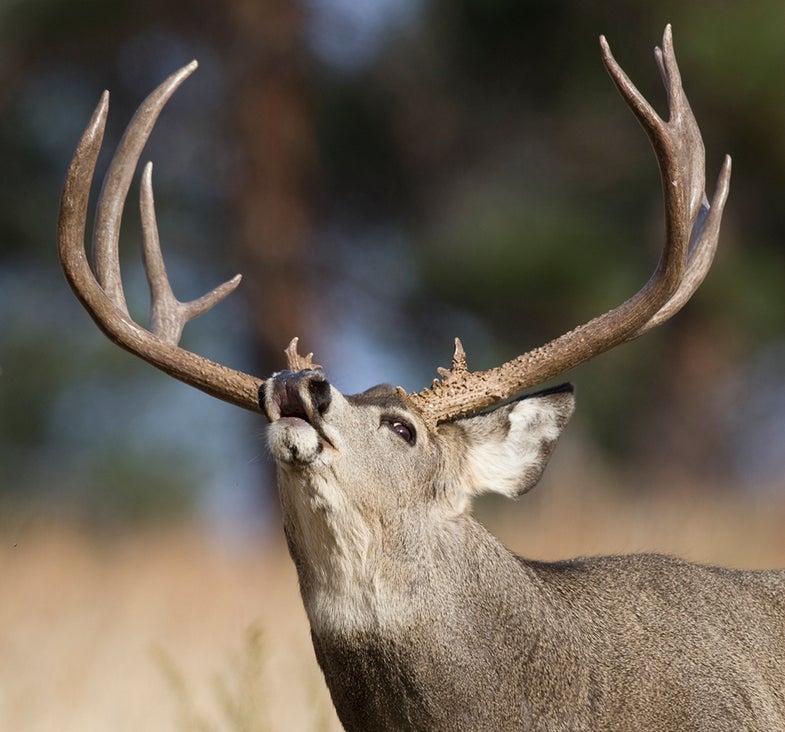 The first time I heard it years ago, I was shocked. I was photographing rutting mule deer along Colorado’s front range when a mature buck laid back its ears and emitted what hunters now refer to as the snort-wheeze challenge. Another suitor arrived seconds later. Despite the hair-raising tension, a clash did not ensue. Nevertheless, I’ve employed mule deer vocalizations on my hunts ever since.

Mule deer and whitetails have a lot in common, after all, including DNA. Distinguished big-game biologist Valerius Geist details the relationship in his book Mule Deer Country. Mule deer are recent newcomers to North America, with whitetails being the oldest deer species in the Western Hemisphere. Geist details how whitetails flourished throughout North America, finally populating the northwest coast, where they eventually evolved into a separate species: blacktail deer.

Approximately 10,000 years ago, changes in the climate and the introduction of hunters on the landscape altered the makeup of the animal kingdom. This allowed both Eastern whitetails and Western blacktails to expand their populations and range. The two met and bred, and mule deer arrived on the scene.

This lineage explains why you should consider calling mule deer, which make sounds similar to those of whitetails. Although several manufacturers have developed commercial mule deer calls, such as the Primos Power Mule Deer and Blacktail Grunter ($19; primos.com), you don’t have to invest in another set of calls. Mule deer calls may be throatier and a shade deeper in tone, but with proper inflection and some practice, you can call muleys with your whitetail calls.

The Sounds to Know
Mule deer vocalizations to mimic include the previously mentioned snort-wheeze, grunts, bleats, and fawn bawls. Rattling can also get results. All can work throughout the fall to pique curiosity or incite an all-out aggressive charge. One thing to keep in mind: Mule deer evolved in open country, so they trust their eyes as much as they do their other senses. Calling from cover to force a buck to look for you will often increase success.

During archery seasons or in controlled hunting settings, the use of a decoy will also boost the chances of a response. Two-sided, photo-realistic decoys, like those made by Montana Decoy Co. (montanadecoy.com), can be used near a stand site or employed in spot-and-stalk hunts. The Be the Decoy Blacktail Betty Hat ($40; mountain-­archery.com) allows you to look like a mule deer. But be safe and never use this during firearms season.

Early-season hunters could entice a bachelor buck from afar using grunts or even with rattling. Bucks have started setting the pecking order, and any indicator of a potential resetting of the ranks could warrant a close-up investigation. Nonaggressive is best in the early season, with subtle grunts and light rattling being key. If you don’t have a set of mule deer antlers to rattle, don’t worry. Whitetail antlers make a similar clatter, so any set from a mature whitetail will work.
Into the Rut

For hunters fortunate enough to hunt the rut, all mule deer vocalizations have potential. Bucks commonly grunt when trailing does, and other muley bucks might come over to investigate. Add in a rattling session and bleats to complete a charade of bucks fighting over an estrous doe. In thick cover, such as Western river bottoms or cedar-choked slopes, I’ve used a combination of rattling, grunts, and bleats to bring mule deer to within bow range.

With snort-wheeze calls, like Knight & Hale’s Snort Wheezer ($11; knightandhale.com), you can challenge cruising mule deer bucks. This call sends the same message to muleys as to whitetails: “I’m the dominant buck. Don’t mess with me.”

Lastly, consider fawn and doe distress calls. Mule deer have a tendency to run to another deer in distress, particularly a high-pitched fawn call. E.L.K. Inc.’s Deer Stopper ($11; elkinc.com) call plays off this very concept. A series of bawls imitating deer in distress often makes a buck stand up in dense cover and reveal itself. Does characteristically run to the aid of any anguished deer, and any buck with a herd of does will likely follow. Finally, a lone buck fleeing or traveling away from you will almost always stop for a call, giving you an opportunity for a shot.