7 Deer Hunting Tactics You’ve Never Tried Before But Should

Try these oddball strategies to shoot a big buck this season 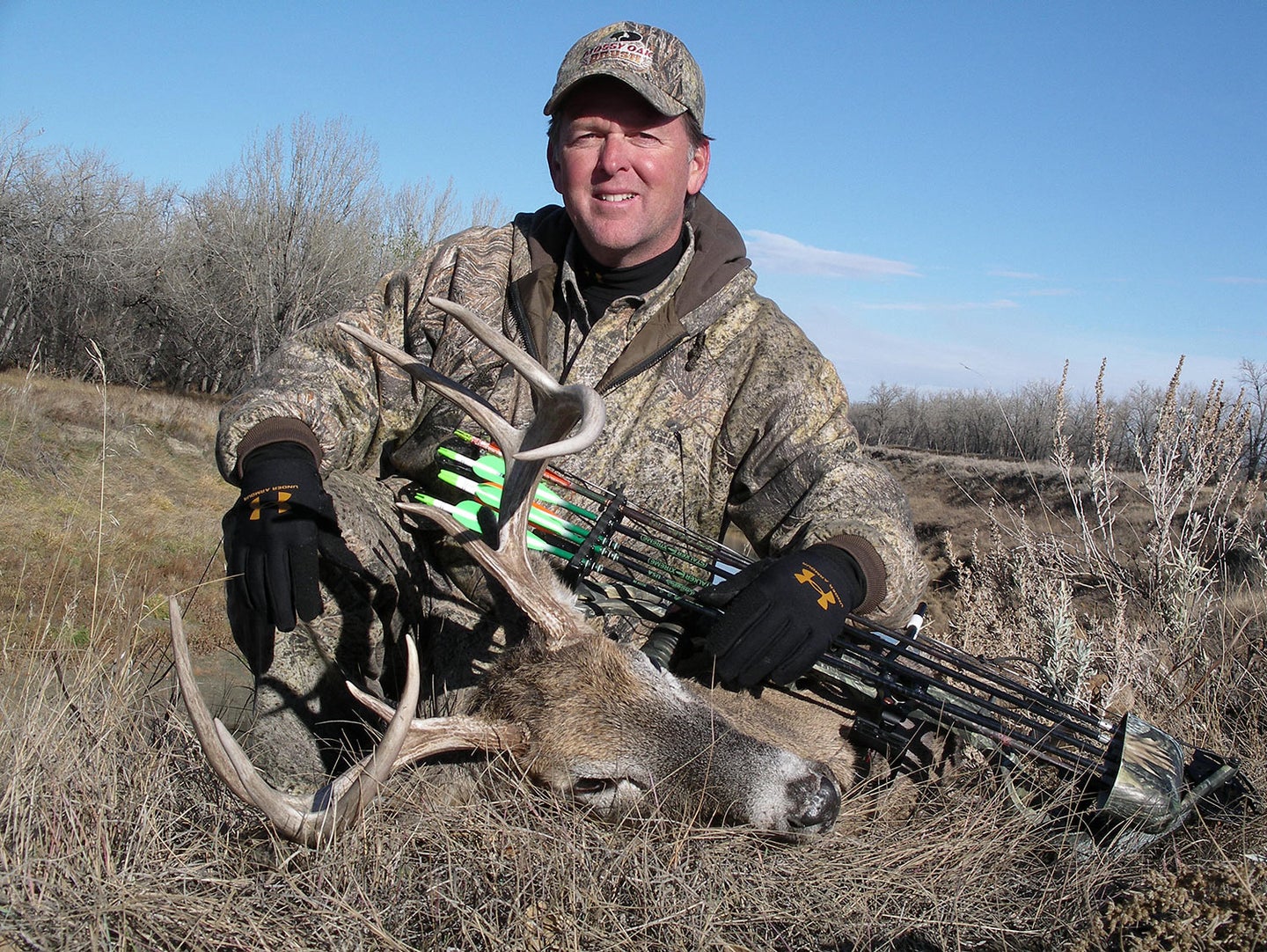 You’ve probably heard about all the standard deer hunting tips and tactics by now. Target pinch points and funnels during the rut, mind the wind, monitor major food sources, so on and so forth. But what are the secret tactics that real hardcore whitetail hunters are using? You know, those oddball deer hunting tips that don’t typically get covered in articles. Turns out, there are quite a few.

Take for example, my friend Eliot Strommen. When he glasses a whitetail buck crossing a field of alfalfa or wheat, swaggering alone or trailing a doe, he watches where the deer enters the timber, then eases downwind into position as close as he dares. The longbow hunter stands behind a tree, picks up a stick and starts cracking logs and whipping brush. He picks up his right foot and paws one, two, three…then with the left, one, two, three.

“If you watch a buck paw the ground or scrape that’s the sequence they use,” says Strommen, who wraps up his routine by pinching his nose and cutting loose a whiny grunt-snort-wheeze with his voice.

The idea is to sound like an inferior buck in the brush, one that is roaming around a mature deer’s space and getting on his nerves. “After making all that racket, I’ve had bucks run up to within 30 yards of me, wild-eyed and hair raised,” he says. “They stamp and snort, it’s pretty wild.”

His tactic might seem odd to some, but it works. Here are a few more tricks you have probably never tried before, but should this season.

One late October morning I smoked an 8-pointer with my muzzleloader. His hocks were black as clumps of coal, and he reeked so badly I almost choked as I opened him up . Pop, pop, pop in the leaves. I peeked up and saw a 10-pointer boring down on me, eyes ablaze and tines held low.

The intruder marched to within 20 yards. I crouched behind the dead deer and shivered. The buck stopped, stared, detected no threat and turned and swaggered away.

It was one of my wildest hunts ever and it taught me something. For a week or so in the late pre-rut, dominant bucks looking to mix it up are drawn to the musk of one another. Play off that and set a mix of buck urine and/or tarsal near your stand. If you can hack the black hocks off a buck your buddy shot earlier in the week, do it.

Hang wicks with buck scent or hocks near your post and be on your toes, especially if you’re hunting on the ground. A crazed, 200-pound buck homing in on the musk of what he perceives to be a rival is one bad dude.

You don’t have to wait until gun season to get out of a tree and stalk. One November day bowhunter Don Kisky left his Iowa farmhouse with 5 steps in his pocket and a small lock-on stand on his back. He’d been seeing little deer movement from his best stands the last few days, and it was time to change it up.

“When bucks are locked down with does and breeding them or getting ready to, many of them aren’t in their core areas anymore,” he says. “That’s why the woods seem to go dead and your stands go cold. Many bucks and their does are away from the main timber, out in a grassy ditch, brush pile, cedar clump or other out-of-the-way spot. They won’t move for several days, so find them and go to them. The bucks are so focused on their doe that their guard is down, and if you stalk right you can get super close.”

Kisky climbed an oak tree that day, glassed the CRP ground for an hour and spotted a big 11-point curled beneath a cedar tree across a pasture. The buck, tongue lolling, looked exhausted from chasing and breeding his doe.

Kisky wasted no time bailing out of his makeshift observation post. He got the wind, stalked for nearly an hour, closed to within 20 yards, drew his bow, rose up over a grass patch, and nailed the 162-incher.

Even when Kisky is sitting in one of his best tree stands and spots a buck tending or bedded with a doe, he doesn’t think twice about climbing down if the situation is conducive to a stalk.

“Most bowhunters that spot a buck with a doe like this are reluctant to move,” he says. “They sit there second-guessing and miss out on a golden opportunity. Look things over and make a plan. If the wind, terrain and cover are right for a stalk, don’t be scared to get out of your tree and go make it happen.”

One season in Illinois I saw a 10-pointer, his rack would go 170 if it was an inch, coming on a trail, moving right to left, upwind, strolling with his head down, the way you want a buck to walk into killing range. He was 60 yards when I stood and clipped the release to the string. It struck me and I smiled, “I am going to kill a Booner with my bow.”

At once the buck stopped, wheeled and leaped into the brush. I got to looking around and wondering when it hit me, “He smelled me at the point where I had walked across that trail 3 hours earlier.”

Ever since, I have never stepped foot on or near a deer trail. I always parallel a trail well on the downwind side of it. When I have to cross one, I take a few steps back, take off and jump as far and high as I can. Sounds silly and a little overboard, but by launching you leave no scent on the trail or several feet off to either side of it. I’ve seen with my own eyes that it makes a big difference.

One of my mentors in the 1990s was Jack Atcheson Sr., a renowned hunting consultant and taxidermist who has hunted on 5 continents and shot as many head of game as any man on earth, from Cape buffalo to elk to sheep to all the varieties of North American deer, and some big ones.

One time on a pack-in hunt for mule deer in Wyoming, Jack told me we were going to still-hunt the entire week, and he was going to teach me how to do it.

“I’ve been hunting deer for 20 years,” I reminded him with a smirk.

“Yeah, but this week you’re going to learn how to do it right.”

On day one, we split apart about 200 yards and still-hunted west toward our landmark, a towering crag. I arrived in an hour, sat on a log and waited. Two hours later, in creeped Jack.

“See anything?’ I asked.

I had jumped one doe, and I got Jack’s message loud and clear.

For the next 5 days we hunted side by side, creeping up mountains and down drainages, stopping often to scan wide with our eyes and glass tighter into the cover. Every 100 yards or so, we’d stop, turn, creep back 50 yards and re-scan the terrain where we had just come from.

On the last day, that is how I found and shot my buck.

“Every person I’ve ever hunted with, and there have been many hundreds, moves way too fast and never looks back,” Atcheson told me. “Still-hunt as slowly as you can for 50 yards, and then slow down some more for the next 50. Stop often, always beside a tree that you can use as a rifle rest if you need it. Every several hundred yards, fishhook back and look where you came from. You’ll see and shoot a lot more bucks that way.”

Dr. Grant Woods is not only one of the top whitetail biologists in America, he’s also a hard-core bowhunter. That’s why I put so much stock in his research, from the routine to the, well, strange.

The Missouri researcher has captured and analyzed hundreds of thousands of trail-camera images over the years, with many of the best shots coming at scrapes doctored with a variety of scents and lures. So what’s the best scent to attract bucks to scrapes?

Woods has found that both mock scrapes created with human urine and pre-existing real scrapes doctored with pee produce the most buck sightings and, get this, the most mature buck sightings.

“It happens more often than random chance can account for,” Woods says. He and other scientists note that mammals like deer and bears are likely drawn to human urine out of curiosity of the smell, as well as the salt therein. Forget that pee bottle you’ve been fiddling with for years.

One day I scouted a 50-acre woodlot and found a dry, shallow creek bed running through the length of it. I walked the ditch until I found the spot where several deer trails converged and crossed it. The next morning the deer would be coming back into the woods to bed from alfalfa to the north, and the wind would be out of the west. Perfect!

Before dawn I found a spot on the east side of the pinch point, lay down and dozed until sunrise. I perked up and kicked back against the ditch bank, so just the top of my head was showing. The leaves were down, and I could see well to the north. As the sun got higher, the deer started coming. The first two animals walking on the trail were bucks, a fat 8-pointer followed by a bigger 10.

With the bucks 100 yards out and approaching, I rolled onto to my knees, stayed crouched, nocked an arrow and put pressure on the string. The 8-pointer stepped behind a tree, and I didn’t wait. When he dropped down into the ditch to cross it, I ran an arrow through his lungs. He ran up and out of the ditch, but he didn’t go far.

You don’t find this type setup very often, but when you do, you’ve got one of the best spots ever for an archery ground attack. The ditch or depression should be only about 3 feet deep, so you can lie back, watch, roll onto to your knees and draw your bow and kill a deer when he eases into the ditch or walks parallel to it.

Read Next: Ultra Aggressive Deer Hunting Tactics for the Rut

Illinois hunter Dan Perez hasn’t killed dozens of 150-inch-plus bucks by being shy. When the weather turns brutal and the creeks freeze solid in the Midwest he rolls into his best spots with his bow or gun, pack, tree stand—and a sledgehammer.

“If you crack open some moving water near a crop field, you can have fantastic action,” he says, “especially if it’s been a dry fall and there’s not a lot of standing water around.”

One time a few years back, Perez dropped the hammer and battered a big hole in a frozen creek near a cornfield, then hung a tree stand on the east side of it. When he returned 2 days later on a northwest wind the joint was littered with tracks, rubs and scrapes, and it stank of rutting deer. Between 1 and 3 p.m. 5 different bucks followed does in for a drink. At 4:30 he drew his bow and whacked a 10-pointer coming to the only open water for a mile.