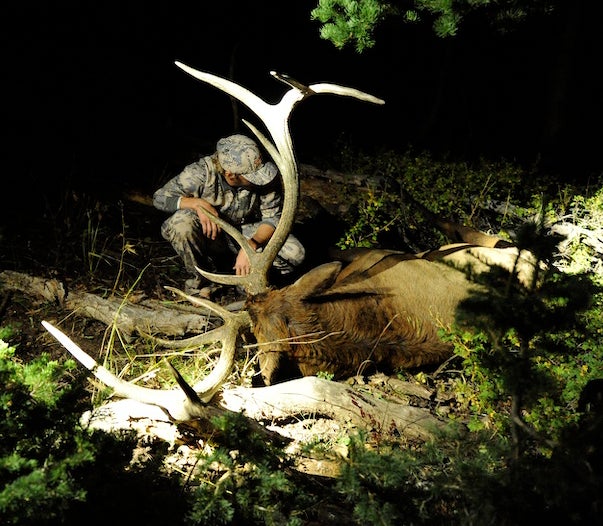 >>CHECK OUT PICTURES FROM TODAY HERE!<<

We decided to forgo the vast network of roads and 4 wheeler trails for a distant roadless area in the unit. Just 3 days previous, we had spotted a couple hundred elk headed in that direction… we were filled with anticipation and hope, not to mention we were down to two days left in the hunt. This day started at 4:00 a.m. and ended the next day at 3:30 a.m., 23.5 hours door to door. It was one of the finest days of elk hunting I’ve ever had. We stalked 6 different GREAT bulls. It was sunny, it rained, the wind was calm, and then it blew hard. We had hunted the previous 11 days looking for a monster and we finally found him. The rut was in full swing and we had the experience of a lifetime, in a sliver of the finest elk country I’d ever seen. This story is best told through the eyes of the hunter, so I will leave you with Mr. Andrew Crow’s words. Enjoy!
-Mark

I don’t know how, but I woke up and just knew that it was THE day. What I didn’t know was that it would take the entire day, down to the last bit of light, for this to be true.

Because of this premonition, my expectations were high and every bull we stalked I assumed was it. I must admit there were doubts as the day waned and the score was high in favor of the elk.

By noon we had stalked two amazing bulls. One was a monster six point that followed his cows down the steep ridge instead of the nice grassy bench that we were set up on. The second was an awesome 5×6 that we watched waltz out into a grassy pond and collapse onto his side in the water. By the time we reached the edge of the meadow, he was strutting around a wallow, his coat and antlers black with mud. He was a proud old bull and smart, interested in our cow calls but always staying at least 100 yards from the edge of the trees, well out of bow range.

A stiff afternoon storm joined us for our next stalk down a sage meadow, crab crawling to stay below that tops of the bushes. Just as we were getting close to the herd, a young and feisty mule deer decided he wanted to show his buddies how to run off 50 head of elk. We watched in stunned disbelief as this deer, about the size of a calf, charged them with total abandon, spooking them up the hill and out of sight.

A satellite six-point had remained bedded down the hill from the rest of the herd. With the wind at our backs, we knew that a stalk would be chancy, but decided that it was worth a try. I crept slowly across the open flat pausing often to glass the bull through the slight magnification of my range finder. As I got closer and my angle changed, I saw that a small log was going to obstruct the shot until I was right on top of him. I was too exposed to change my approach so I continued on, praying that the wind would shift just enough to keep my sent from reaching him. It didn’t. At 75 yards, after 20 minutes of calculated movements he turned his head and looked my way. There was a thick aspen blocking a direct view of me that allowed another ten steps before he busted.

Not 5 minutes after we regrouped, a bugle cut the air less than 100 yards from us. Faster than you can say “bull” we were back on point and another stalk began. Reggie moved around the side, cow calling to keep his attention as Mark and I went dodging through the aspens trying to stay out of his line of sight. I almost hucked a stick at the next muley that busted out of the trees spooking the bull who then climbed out of his bed with a groan and fed off into the timber.

I felt that unique combination of awe and frustration rise in me: awe at the experiences of the day and all the amazing bulls we were seeing, frustration at the spoiled opportunities. I had to remind myself that if it was easy, it would not be elk hunting.

We could hear bugles in the distance and decided to head to the basin that we had glassed first thing that morning knowing the elk tended to feed there in the evenings. We hiked up the drainage and spotted what appeared to be a small herd on the hillside. As we glassed the hill, more and more elk appeared. We heard a few different bugles not really taking notice until we heard HIM. It was one of those deep, guttural screams that make the hair on your neck stand on end. We knew there was a bull we weren’t seeing from our current spot, so we quickly hiked towards the closest vantage point for a better look. It took a few minutes for the monster to come out from behind the small cluster of pines, but when he did we all took notice. He was huge. All these Utah elk have the bodies of horses, but this guy was massive. He dwarfed all other elk on the hillside, and his coat was an awesome light tan mottled with smears of mud. This was the biggest bull we had seen all trip.

Next to bringing down my first bull, the stalk we would put on this guy is the highlight of my four seasons spent hunting elk. We spent over an hour crawling on hands and knees right through the middle of at least 75 head of elk. It was excruciatingly slow and measured with minutes separating each slight progression forward. Elk would stare right at us, but were not startled by us as we moved just below the tops of the sage. From the sounds of his bugles, we could tell he was just over the top of the rise, probably bedded amongst cows we couldn’t see. Just before reaching the top of the hill, a cow spooked enough to trigger the herd. We jumped up and raced the last ten yards to the top. The bull was just getting out of his bed by the time we spotted him.

Mark was ready with the rangefinder and as soon as I saw him, I drew my bow. He was down the hill enough that I had to take four or five big steps to get the right angle on his body while still at full draw. I heard Mark call out the distance just as he was beginning to turn his body away from us and continue down the hill, “47 yards”, he took a few more steps, Mark stopped him with a cow call and said, “50 yards”. I placed my pin and released the arrow. My stomach dropped as I glimpsed it sail six inches over his shoulder.

It was now after eight o’clock, we had been on the move since four that morning and covered over ten miles. I was tired and had just missed the bull of a lifetime. The confidence drained out of me and my countenance deflated. I could not believe that I had missed that shot. I played it over and over again in my head trying to figure out what I did wrong. I was devastated.

I was done for the day. It was getting dark, we were whipped and there was beer and leftover pizza waiting for us at the truck. I made the call to head in, but there was a bull that changed my mind.

He had been bugling in the trees below as we walked off the hill, but suddenly he was a lot closer. I looked at Mark, I could tell he had pizza and beer on his mind as well. Then he bugled again. He sounded like a good bull. I knew I had to go after him.

Mark and I took off across the hillside towards the trees. We immediately spotted cows coming up through the trees. A cow winded us and barked. Things were moving quickly. We could see cows turning to angle downhill. Another bugle cut the air, he was right below us. There was a flash of color and I spotted him through the trees. He was angling to cut off the cows, charging uphill at full gallop. Mark cow called when he hit the edge of the meadow and stopped him in his tracks. I drew my bow. Mark ranged him. It was a long shot, right at the edge of my accuracy, but I knew I could make it. I raised the bow slightly found the pin and released.

I sat and watched as the bull calmly laid his head on the ground just down the hill for the last time. It had finally come together. I could not believe how fast it had all happened. After all the persistence, hours spent glassing and calculated stalks. A great bull just charged right up to us and stopped perfectly broadside. I can’t explain it, but so is elk hunting. I will forever keep doing it for experiences just like these.

The next day we spent nine hard hours getting Andrew’s bull completely out off the mountain. Our friends Reggie Parsons and Josh Utley are responsible for the incredible videos from the final day of the hunt. Find out more about their videography at www.tinesup.com.

>>CHECK OUT PICTURES FROM TODAY HERE!<<