10 Essentials for a Backpack Hunt

Sheep hunting here in Alaska has been an annual tradition for me for the past 9 years, and it’s been... 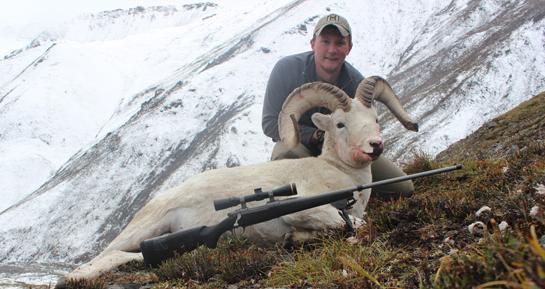 Sheep hunting here in Alaska has been an annual tradition for me for the past 9 years, and it’s been quite a learning experience. Every year I find a new piece of gear or method that helps me hunt harder, longer, and more efficiently. However, I’ve whittled down a massive list to 10 of what I consider to be my most important gear items for a backpack hunt for sheep or goats here in Alaska, or for Elk, mule deer or other mountain game in the lower 48.

Boots
Quality boots are a no brainer for a backpack hunt, as a single blister in the wrong place, or beat up feet can instantly end a hunt, even the hunt of a lifetime. Good boots are expensive, but you get what you pay for. It’s mind blowing how fast rock piles and sharp shale will destroy a cheap pair of boots. Some of my buddies really like the Kennetreks, and La Sportiva’s, but my favorite so far are the Lowa Tibets. I’m finally retiring my pair to home after putting 3 sheep hunts, 2 goat hunts, and a brown bear hunt on them, the most I’ve gotten out of a pair of boots. I could probably stretch it to another sheep hunt, but I like to quit while I’m ahead.

Rain Gear
Depending on where you’re hunting, your rain gear needs will differ, but here in Alaska, or anywhere that has the potential to rain for days on end, I only use rubberized or pvc type rain gear like Helly Hansen Impertec. Some of the “breathable” rain gear out there is light and works great when you can dry it out frequently, but the problem with all of these fabrics is that they are not actually waterproof. In sustained weather, the fabric will eventually become saturated, and at that point is worthless. The vast majority of the time you can get away with using it in AK, but when it fails will be the time you need it the most.

Pack
It goes without saying that for a backpack hunt, one of the most important pieces of gear is the pack itself. Like boots, a pack that fails you will result in a quickly ended hunt. You need to be able to pack 10 to 14 days worth of gear and food in, and your meat, cape, and horns/antlers out. I used to swear by frame packs, and they are unrivaled for stability under heavy loads, but the past few years I’ve been sold on the Kifaru Timberline. It’s the most comfortable pack I’ve ever worn, and even under heavy loads has plenty of rigidity and support, mostly due to their harness system. There are several other popular brands of good internal or hybrid frame type packs, but all the other ones I’ve used or tried are either twice the weight and half as comfortable, or comparable in weight, but in my opinion, their durability is questionable at best.

Glassing Optics
For high-country hunting, if you don’t have solid glassing optics you might as well stay at home. For my use, I need to be able to tell if a ram is worth chasing from a long ways away, sometimes up to 4 or 5 miles. Good glass is expensive, but if there’s one area to spend the most money, this is it. My setup is the Swarovski 20-60 X 65mm HD spotter, and the Swaro 10 X 50 EL Range binos, combining top-end binos with a top-end rangefinder that accounts for uphill and downhill shooting angles.

Riflescope
Since all of the mountain backpack hunting I have done thus far has been with a rifle, my riflescope is right up there on my gear list. I have to say that the best scope for the job that I have used is the Leupold VXIII 2.5-8×32 scope with the CDS turret. It’s lightweight with plenty of magnification for any reasonably ethical range, and with the custom turret, all you have to do is range the target, then crank your elevation up to the clearly marked yardage setting. As far as value, ease of use, and toughness, these are my absolute favorite.

Stove
Backpacking in for any length of time, it’s likely that you’re not packing 14 days worth of sandwiches and summer sausage, so a stove is a must for cooking. There are a lot of good options out there, but a few things to consider. Most hunts will allow for a compressed gas stove, and they are pretty hard to beat. One favorite, of course is one of the jetboil stoves. There are several models, and they are pretty affordable. The whole stove and one fuel canister fits in the boiling pot, and it’s probably the most packing friendly stove I’ve used. Hunting some places in Alaska especially, however, require flying commercial, and you can’t count on being able to purchase compressed fuel canisters at your destination, so if you’re looking for a great all around stove, I’d recommend the Primus multi-fuel stove. You can use Primus canisters, but you can also use white gas, diesel, gasoline, or kerosene if it comes down to it.

Trekking Poles
Although the trademark of bright color wearing, granola crunchers everywhere, a good set of trekking poles is in my opinion, a must have for high-country backpack hunts. Sure, plenty of hunters have successfully gone without them, but since I started using them, I won’t go back. Even just bringing one helps tremendously when sidehilling or packing heavy weight in steep terrain and/or loose rocks. They are also great for stream crossings. I started bringing 2 black diamond poles that fold up like tent poles so they can be stowed easily, and If I hadn’t brought 2 of them, I would have been swept downstream on one particular high river crossing on this year’s sheep hunt. Some poles also have a camera screw on top so you can use them as a monopod for either your camera or spotting scope.

Knife
This is pretty straightforward, as any hunting trip would require one, but the best backcountry hunting knife I have found is the Havalon Piranta. Not only are they razor sharp with easily replaceable blades, but they are very lightweight and affordable. I’ve taken apart everything from sheep, to moose, to brown bears with them, and they are definitely up for the job. I would recommend getting one with an orange handle for visibility. I don’t know how many times in the past I’ve set my knife down on a rock while cleaning a sheep and nearly lost it.

Quality Clothing
There are several things that are predictable on a sheep or goat hunt here in AK, steep mountains, a lot of miles to cover, and crazy weather. Even in August and early September I’ve experienced everything from 80-degree bluebird days to 18-degree blizzards. It’s very important to bring a clothing layer system that can cover all the bases. I recommend the fast drying synthetics, although I do bring a wool/synthetic blend wool pullover for when the mercury really drops. Like everything else, good clothing isn’t cheap, but one of the biggest myths out there is that you have to buy the fanciest, most high tech camo clothing with everything but batteries to even have a chance at surviving, much less taking a trophy animal. For 95% of mountain rifle hunting, you don’t even need camouflage, and if you keep your eyes open, you can get everything you need for a fraction of the cost. For example, this year I wore a set of flat green Mountain Hard Wear pants that were comfortable, tough, and very fast drying for a total of $80, rather than a set of some of the “fancier” pants available that run anywhere from $230-350, and do literally nothing more. You could fairly easily get a complete set of clothing (rain gear included) for around $600 or less, rather than paying well over $1000.

First Aid Kit
When you’re in the backcountry, you have to be all but self sufficient, so you need to come prepared to deal with whatever you might encounter based on your needs. Here’s a list of some of the items I won’t go without: Bandages of different sizes, hand sanitizer, chap stick, pain, cold, and digestive medication, an extra lighter, extra pack belt buckle, paracord, duct tape, moleskin, and water treatment drops. You have to customize your kit for your own needs, but I’d recommend using Murphy’s law as your guide.

There’s obviously more to one of these hunts than these 10 items, but if you have these bases covered, you’re on the right track!