Five Tips For Hunting With a GoPro Camera

Don't forget these tricks and accessories 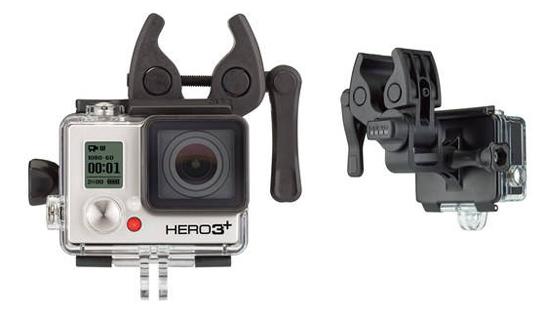 Last spring I had a chance to hunt turkeys in Nebraska with Cabela’s, Camp Chef, and GoPro (this was a joint adventure with some of the Field & Streamers). I’d hunted and fished with GoPro cameras before, but this trip was the first time I receieved a tutorial on how to most effectively shoot with the little guys (we were using the Hero 3+).

But before we get into shooting tips, here’s a quick video from our hunt, shot and edited in signature GoPro-style (the footage was recorded by GoPro’s Damon Jones, Field & Stream’s Dave Hurteau, and myself).

1) Get close
Personally, I think GoPro footage looks best when shot in the 1080p ultra-wide view setting. But this wide field of view means you need to get close to whatever you’re capturing. I found that if you put the camera at a distance that feels comfortable and then cut that distance in half, you’re about close enough. For perspective, the longbeard gobbling his head off at the one-minute mark in the video above is about 10 to 15 yards away from the camera.

2) Get the Sportsman’s Mount There are a ton of different types of mounts for these cameras. But the one you really want is the new Sportsman’s mount. I had a chance to use this on the Nebraska trip and a recent fishing trip in Mexico. It’s tough enough to stand up to field conditions–unlike some of the other lighter mounts–and you can clamp it down on all kinds of stuff if you get creative (shotgun barrels, fishing rods, nets, the front of your boat, the handrail of your treestand, the stabilizer of your bow, etc.). The screw-to-tighten clamp is heavy-duty and doesn’t loosen. The only downside to the mount is that it’s a bit pricey at $70.

3) Get the Blackout housing
The Hero 3+ has two lights that blink and flash while recording. This is good for knowing when the camera is rolling, but it’s not ideal for most hunting situations. To solve this issue, the company has introduced a “Blackout” housing that covers up these lights (yeah, and obviously it’s all black). Now you don’t have to worry about a flash of silver glinting off your gun barrel during the moment of truth.

4) Wait for the good light
The camera has a variety of lowlight settings that make it possible to shoot early in the morning or late in the evening when fish and game activity is highest. But, the footage looks the best during bright, sunny conditions. So record whenever the action happens, but if you’re looking for detail shots, wait for the sun.

5) Don’t forget about audio
The camera comes with a waterproof housing that most people seem to use. It’s possible to record good audio through this housing, but it is challenging. If you want to capture turkeys gobbling or elk bugling, use the back plate with slits in it. The Hero 3+ is already waterpoof, so even a steady rain isn’t going to damage it.