Hunting Gear: How to Buy a Backcountry Tripod

The second-most-asked optics question I get, right after “What’s the best cheapest binocular I can buy?” is “What tripod should... 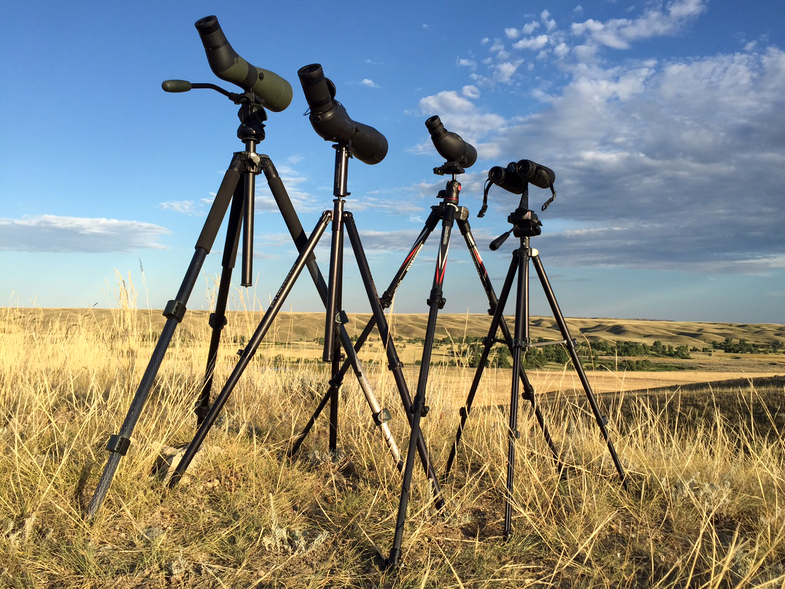 The second-most-asked optics question I get, right after “What’s the best cheapest binocular I can buy?” is “What tripod should I buy for backcountry hunts?”

It’s a good question, stemming from the realization that good optics can save time and steps in the big, rugged country of the West. The best optic for long-distance viewing is a spotting scope, but in order to get the most utility out of a high-magnification scope, it needs to be stabilized on a tripod. Hence, the question.

Tripods can be compact, lightweight, strong, or affordable. As a backcountry hunter, you get to pick any two of those attributes. There is really no model that mortals can afford that meets all four of those qualities, and the purpose of this post is to discuss the trade-offs of matching up various combinations of features to help you pick the best tripod for your budget, hunting style, and expectations. 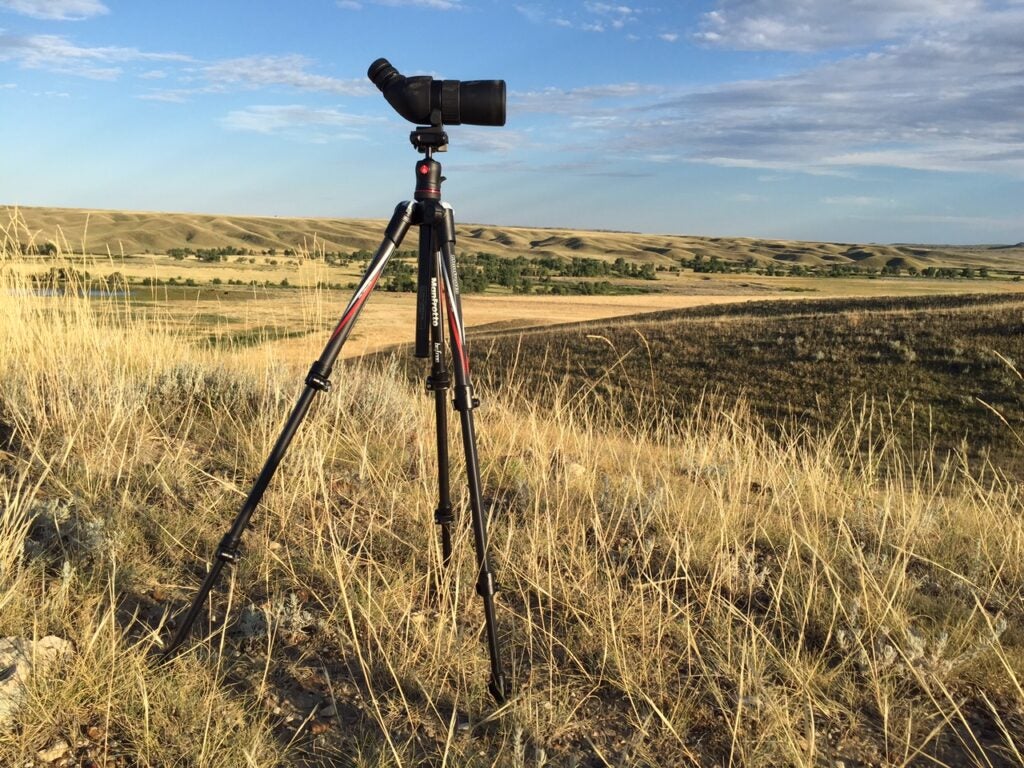 COMPACT AND LIGHT
So let’s look at the first combination of attributes. Both of these—packability and weight—are first-order considerations for serious backcountry hunters. The problem is that a light, tight tripod typically won’t be strong, and may not be able to stabilize the biggest 80- and 85mm scopes that have the resolving power to count age rings on the horns of bighorn rams or points on distant elk antlers.

A compact tripod should be able to be compressed to about 16 inches. But these typically have two-stage legs, which means that they are designed for sit-down viewing—they are not tall enough for a spotter to be able to stand. That’s okay for most of us, who know that the majority of backcountry hunting is spent on our bums, our eyes scrunched up to spotting scopes.

The lightest tripods will have legs made of carbon fiber instead of aluminum. Carbon can shave as much as half the weight of aluminum, but it’s typically more than twice as expensive, and carbon can flex under stress, such as the weight of a heavy scope or the sideways winds on an exposed ridge.

I’ve been testing a new carbon-fiber model from Manfrotto, a leading maker of tripods for photography and videography. The BeFree tripod has four leg sections, so it extends to standing height. With a simple ball head, it weighs 2.4 pounds and is rated to support 8.8 pounds. With a quick-release ball head, it retails for around $350. So far, so good. But when the flimsy legs are fully extended, the tripod flexes too much to stabilize a full-size scope. I’ve been using a compact spotter, and it performs well, but the 50mm scope isn’t my optics choice for a full-on backcountry hunt.

Also, the tiny controls on the ball head are hard to use, and will frustrate a hunter who does a lot of panning and scope adjusting. 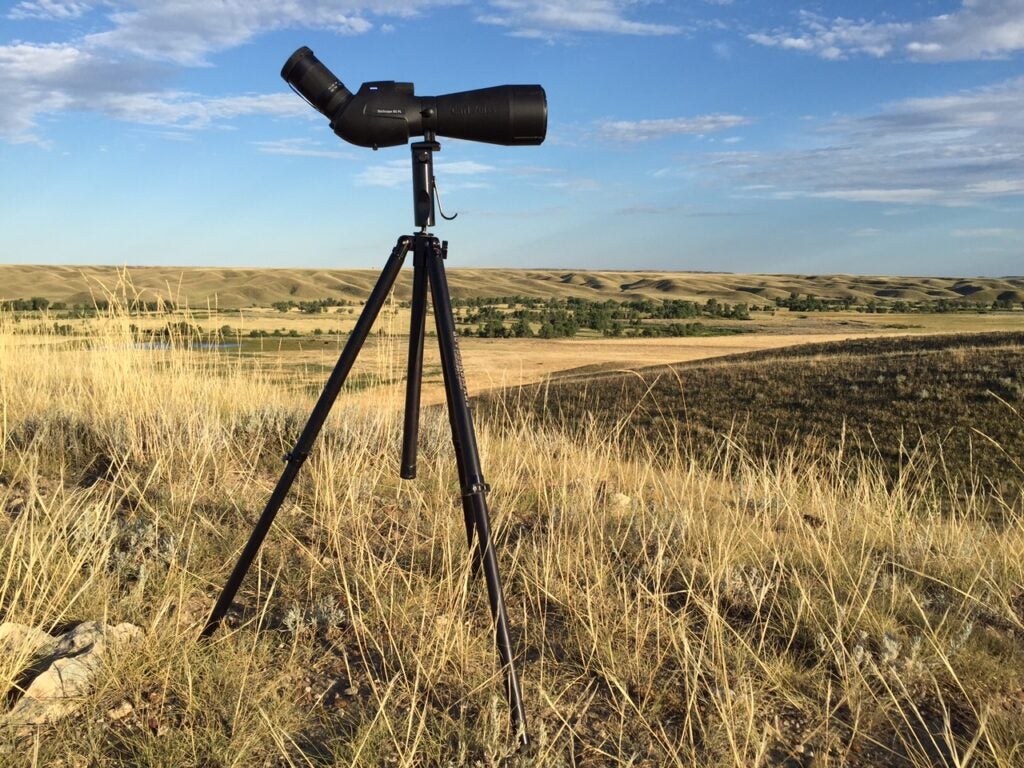 COMPACT AND STRONG
So let’s look at the next combination of attributes, a strong, stable tripod that can telescope down to a compact package. The trade-off is that strength travels heavy, and the best models have stout aluminum legs capable of stabilizing a big spotter like my 85mm Zeiss Victory, which weighs 3.5 pounds.

The gold standard of this type of tripod is the Outdoorsmans’ model. I have the medium version, which compacts down to just over 18 inches and weighs 2.4 pounds without the panning head. Here’s the hard part: the whole unit (tripod and head) costs $569, and you can add another $100 for the tall or compact-medium models.

Still, the Outdoorsman is solid, and won’t chatter or move even in stiff wind. The trigger-style panning head is strong, easy to use, and is infinitely adjustable. And this set-up is versatile. The Arizona company sells adapters to support a binocular and brackets to support a rifle for long shots. 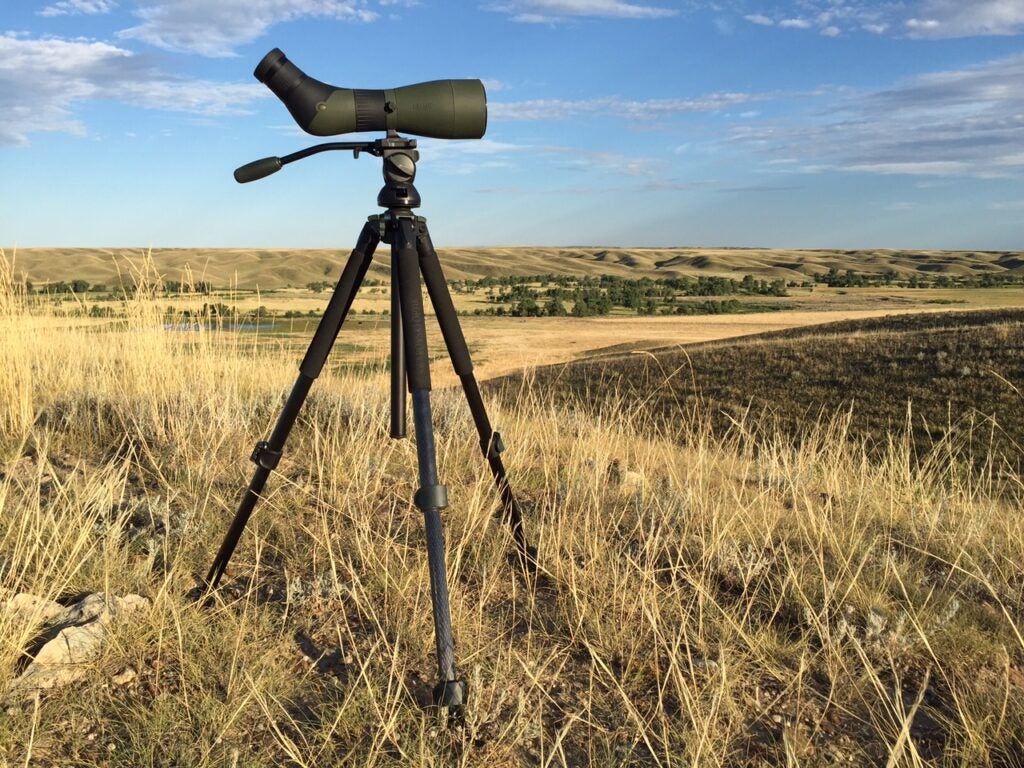 LIGHTWEIGHT AND STRONG
The best example of this combination of attributes is a full-size carbon-fiber tripod such as Swarovski’s CT Travel model. The three-stage legs extend to full height and compact down to about 20 inches, pretty bulky for a backpack. But the carbon legs are beefy, and the 3.1-pound unit (with the panning head) can stabilize a load of about 12 pounds. That’s plenty stout enough for even the largest spotting scopes.

Of course, there’s a trade-off (getting used to that theme here?), and in the case of the Swaro, it’s both price and packability. The tripod and head will set you back about $840, and the bulky unit takes up a lot of room, even when strapped to the outside of a backpack. 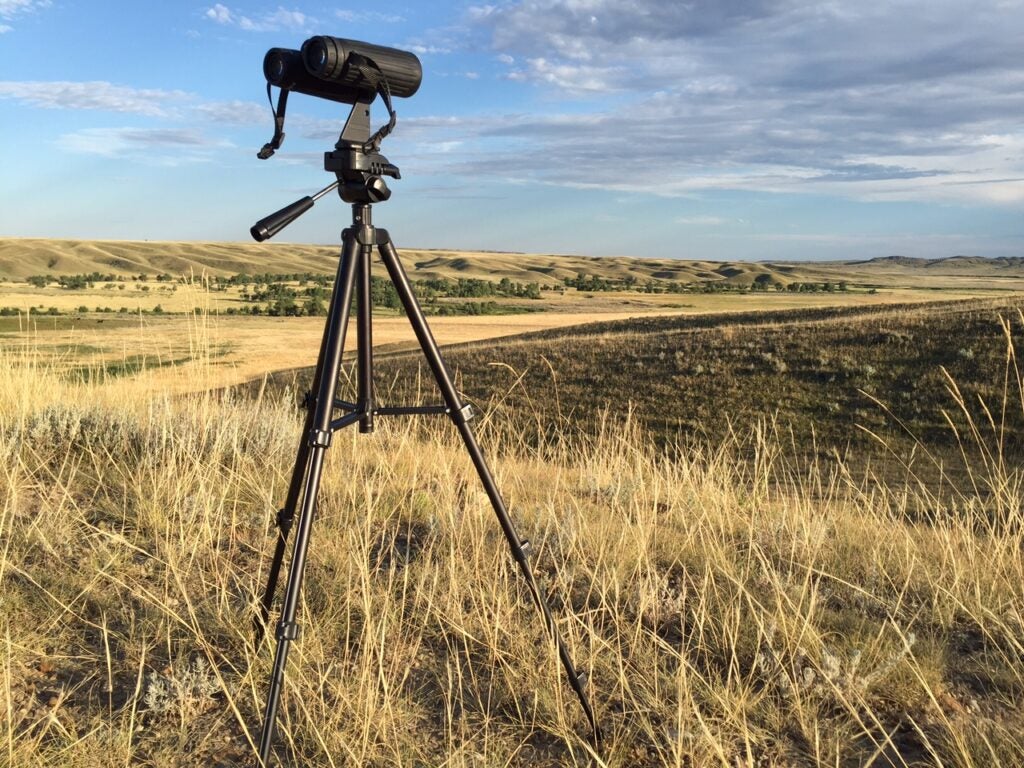 Note: The tripod pictured is not actually the Vortex Summit SS—it’s a Nikon model similar to the Vortex.

AFFORDABLE AND ADEQUATE
This is the sweet spot for this category of gear, and probably the ideal is a light-enough, strong-enough, compact-enough, affordable-enough model like Vortex’s Summit SS. The SS part of the name stands for “super short,” and the Summit, which has five leg sections, telescopes down to a super-packable 14 inches. It is adequately light, weighing in at 1.8 pounds with the simple ball head.

If the Summit has a drawback it’s that it’s flimsy, rated at supporting only about 5 pounds. That means that a full-sized scope may not fully stabilize. But if you add weight below the center post (I make a habit of tying a roundish rock inside a jacket and suspending it from a hook on the post), you should be able to get away with scoping in all but the most strafing winds. The ball head, while compact and light in weight, is a little flimsy. I would consider stepping up to the 3-way panning head, which adds only a few ounces of weight to the package but tons of utility.

The argument in favor of the Vortex is its price. With the ball head, the Summit SS retails for about $180.