A lone Canadian logger was assessing timber in British Columbia last week when he suddenly found himself faced by a... 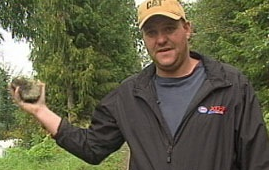 A lone Canadian logger was assessing timber in British Columbia last week when he suddenly found himself faced by a charging black bear.

Armed with neither pepper spray nor a sidearm, Jesse Mengler had to think fast. He reached to the ground, grabbed a softball-sized rock and reverted to the skills he once used as a baseball pitcher.

“…He’s ten feet away. I reached back and just threw the rock and struck it right between the eyes,” Mengler later recalled. “It was like I shot it. Knocked it right out!”

Was it a slider or a curve? It doesn’t matter. The bear obviously had its sights set on Jesse.

“It had one intention and that intention was me,” Mengler told CBC News this week.

(The rock being held in the CBC photo shown here is not the same one Mengler used to knock out the bruin. He said he doesn’t know what happened to his weapon of choice, or the bear, for that matter.)

The experienced woodsman said he has encountered many black bears while working in the Western Canadian back country, but not one that moved as quickly and aggressively as this one.

“Two inches to the left or right, I might not be here telling you the story,” he said.