Gene Swope was snagging for paddlefish with his grandsons on the Lake of the Ozarks when he hooked and landed... 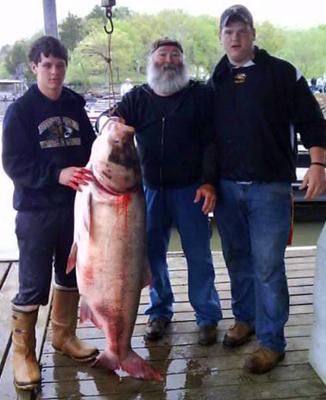 Gene Swope was snagging for paddlefish with his grandsons on the Lake of the Ozarks when he hooked and landed an unfortunate Missouri state record.

Swope hauled in a 106-pound bighead carp, which easily passed the previous 80-pound state record and outweighs the IGFA all-tackle world record by 16 pounds. However, Swope’s catch won’t be counted as an IGFA world record because snagging isn’t allowed under IGFA rules (it’s legal to snag carp in Missouri because they’re not realized as gamefish).

While it was no doubt a thrill for Swope to battle the fish, the bighead carp isn’t exactly a species the conservation department wants to promote in Missouri.

“Bighead carp are an invasive Asian species,” says Fisheries Specialist Andrew Branson. “This is an example of how invasive species can thrive outside of their native environment, and the importance of preventing their spread. At least anglers are removing some of these from the lake, and that’s good news.”

The bad news is that bighead carp are so effective at feeding on plankton that they can totally change the ecology of a lake or river, which hurts native species like bass, crappies and paddlefish.

For more information about aquatic invasive species got to: www.mdc.mo.gov/node/10244/