Image courtesy South Dakota Game, Fish and Parks When Mark Harmon drew a permit for the paddlefish snagging season in... 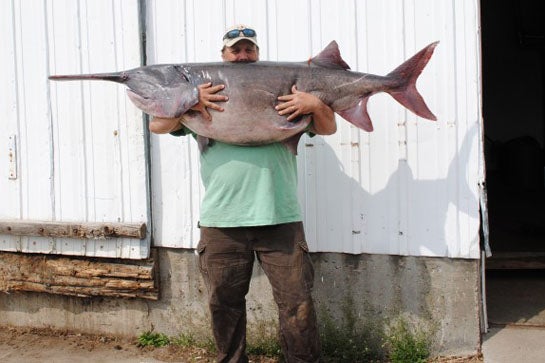 When Mark Harmon drew a permit for the paddlefish snagging season in South Dakota, he didn’t know what to expect when he set out on Lake Francis Case, a body of water situated behind Fort Randall Dam on the Missouri River.

What transpired was a direct refutation of the old adage “Up $%&* creek without a paddle,” because Harmon ventured up that proverbial creek and sunk the hooks into a 127-pound, 9-ounce paddlefish. Harmon’s fish is a new South Dakota state record, busting a previous record of 120 pounds, 12 ounces that stood for 35 years.

It took Harmon and his friend Justin Bryan four attempts to bring the behemoth boatside and pull it over the gunnel.