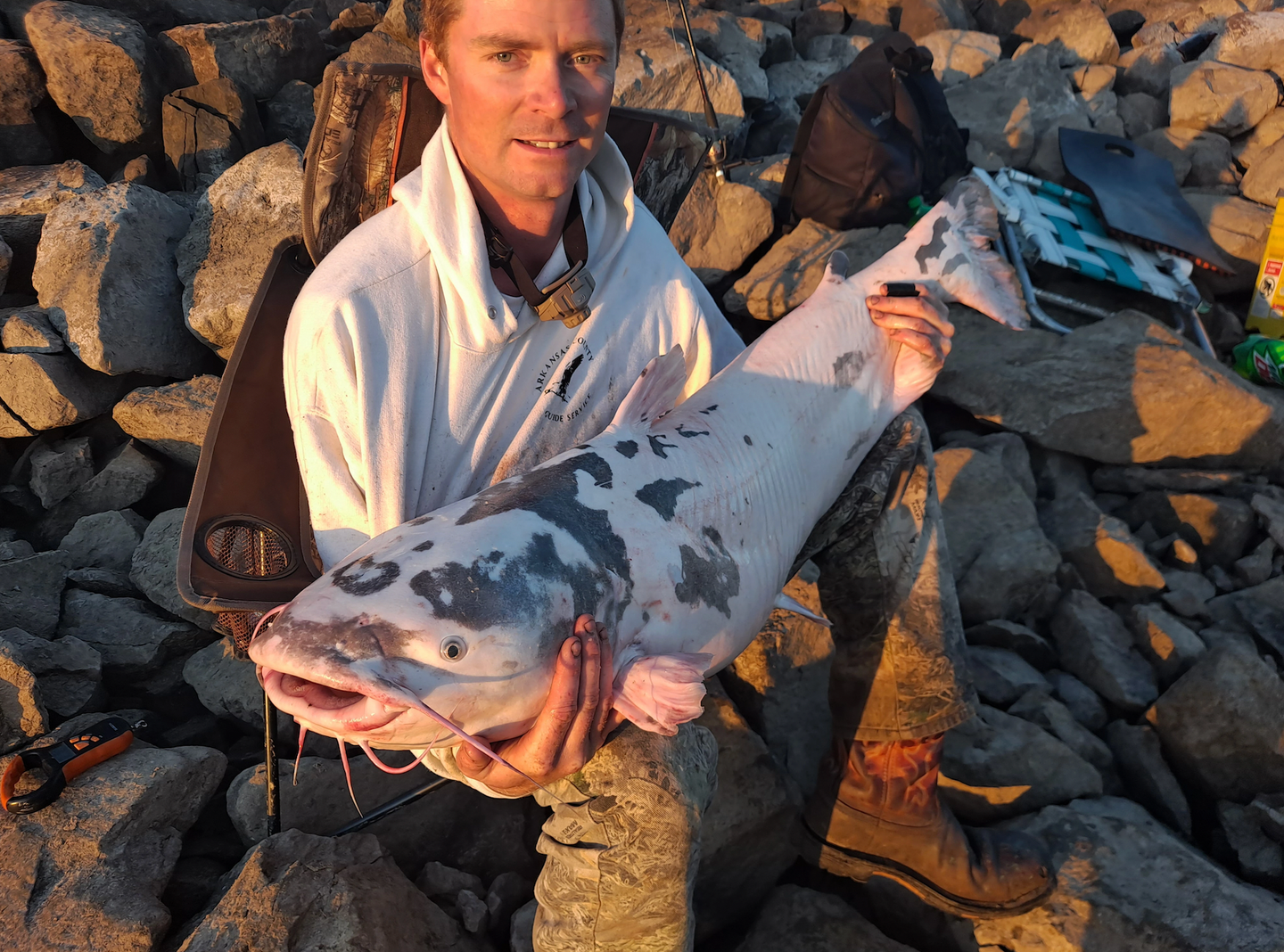 Missouri angler Chad Hester hooked into a unique piebald blue catfish last week on the Mississippi River. His bait? A chunk or invasive Asian carp, according to Kansas City Fox 4.

The catfish was mostly white, except for a few gray splotches near its head and tail. Hester caught the fish near West Alton, a small river town just north of St. Louis, an area known for big catfish. A 130-pound catfish was pulled out of the nearby Missouri River, which flows into the Mississippi at the east end of West Alton, in 2010. And a 124-pound lunker was hooked in the Mississippi River in 2005 by an Illinois angler.

“It was definitely one for the books,” said Hester in an interview posted by Kansas City Fox 4. “I freaked out. I’m like holy cow. This is it. It’s happening. I’ve never been able to see one in real life.”

Hester took a few quick photos with the piebald catfish, weighed it, and then released the fish back into the river. The catfish tipped the scales at 36 pounds, and measured 43 inches.

“[I videoed it] so everyone could see that I did release this fish, and that I didn’t harm the fish,” Hester said. “That way he can spread his genes in the wild and somebody else might have the opportunity to catch him.”

It’s unclear if anyone has ever caught a piebald blue catfish as big as Hesters. He’s been searching social media and the internet, trying to find out. The most recent publicized catch of a piebald catfish was by a Tennessee angler. That fish was caught in late September and weighed 27 pounds. It was hooked during a guided bass fishing trip on the tailwaters of the Tennessee River.

One thing we do know is that in a 2014 report, the Lower Mississippi River Conservation Committee detailed that it only caught two piebalds in 17 years of collecting tens of thousands catfish, so this is indeed a rare catch. From the LMRCC: “Some variation in color exists, from darkly pigmented (melanistic) to snowy white (leucistic), but one variety of blue catfish is the rarest: the piebald blue. “Piebald” is a portmanteau of “magpie” (a black and white bird) and ‘bald’ (for white patch or spot) and refers to a distinctive, but highly variable pattern of mottling in animals. Having the same size and shape as an ordinary blue catfish, piebald blues stand out because of their white skin marbled with prominent black and/or gray blotches.”

“He actually did this cool thing…most fish when you let them go, they just swim right away,” Hester said. “If you watch the video, he kind of goes out, turns sideways…kind of like he was waving goodbye. And then he took off into the river.”

Hester does plan to have a replica mount made of the piebald blue cat from the photos he took.