Heavy floods in Bangkok, Thailand, have caused extensive property damage and hundreds of deaths recently in the country’s north and... 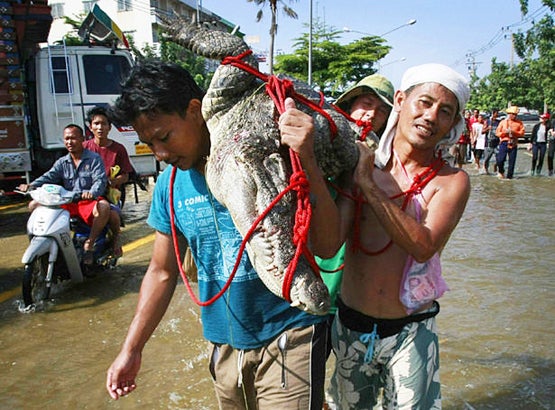 Heavy floods in Bangkok, Thailand, have caused extensive property damage and hundreds of deaths recently in the country’s north and central regions. But now news outlets are reporting another danger that has resulted from the floods: Crocodiles on the loose.

Thai authorities are warning flood victims that crocodiles have used the rising flood waters to escape from a number of the country’s crocodile farms.

“This is the worst thing–knowing that there might be a crocodile or snake there waiting for you when go back to check your home,” said Thai resident Patchara Promkaew to The Wall Street Journal.

Crocodiles are typically bred in Thailand for their skins. Some reports estimate the farms to house “hundreds of thousands” of crocodiles.

The country is offering 1,000 baht (which translates to about $30 U.S.) for the safe capture of a single crocodile. The country is hoping to entice many Thai locals to help with the roundup, although there are already several reports of crocodiles being shot, rather than captured.

Thailand’s recent flooding is the result of heavier-than-average monsoon rains and inadequate dikes. The floods are being called the most significant and destructive in Thailand in several decades.