Barred owls are bullies. They use their larger size and superior hunting skills to make things difficult for the much... 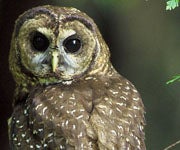 They use their larger size and superior hunting skills to make things difficult for the much smaller and highly endangered spotted owl.

In forest areas where the two species are found, barred owls thrive while the spotted owl suffers. Because of this, the Obama Administration announced a new plan that would allow government workers to shoot selected barred owls so that their spotted cousins might thrive. It’s survival of the fittest at its best.

The plan, announced Tuesday, would also designate habitat considered critical for the spotted owl’s survival. Logging would be allowed in the areas on a limited basis.

Interior Secretary Ken Salazar was quoted in the San Francisco Chronicle saying the draft plan “a science-based approach to forestry that restores the health of our lands and wildlife and supports jobs and revenue for local communities.”

The spotted owl was placed under the Endangered Species Act in 1990. In the years since, its population has dropped 40 percent due habitat loss and those barred owls.

Is this a good survival plan: shoot one species to save another? Comment below!