Urban hunters don’t need to own a car, or have access to one, to enjoy public hunting 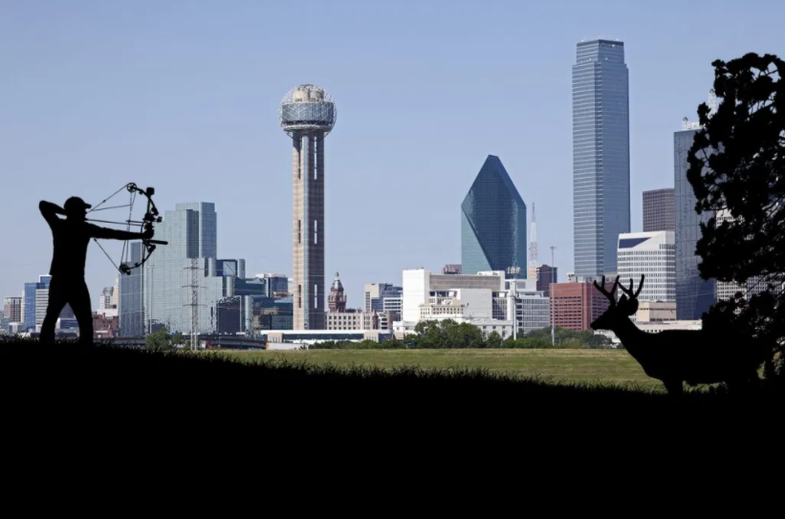 A Texas bowhunter practices shooting on a 3D target outside the city. Texas Parks and Wildlife
SHARE

Many Americans depend on their vehicles to get around, but it you live in a large city you don’t necessarily share the same dependency. New York City’s public transportation system boasts one of the largest subways coupled with one of the largest fleet of public buses in the world. There’s also the Metro-North Railroad that services destinations north of NYC and the Long Island Railroad that heads due east. While fairly inexpensive, all modes of travel operate 24 hours a day, seven days a week. With access to every nook and cranny of the city at the ready, owning a vehicle really isn’t a necessity.

Public hunting lands outside the city, however, aren’t as easily accessible. I mean, you could hail an Uber and get dropped off at your hunting spot, and all this is if the Uber driver doesn’t see you standing there with a gun and a deer and think it’s not some kind of Uber passenger scam. But what if you were to actually harvest an animal? Your driver probably isn’t going to want to put a field-dressed deer in the truck of the car. Even if you’re lucky enough to get an understanding driver, the trip both ways would be very expensive.

So what is a new adult urban hunter without a vehicle to do when they want to access public land? I would highly recommend taking advantage of the public transportation available in your area. My experience is rooted in NYC, but these tips will help anyone living in a metro area that offers public transit.

Get familiar with your city and state laws regarding traveling with your hunting weapon of choice. I bowhunt, and have traveled to local ranges using city trains and buses. For my peace of mind (and that of my fellow passengers), I have two padlocks on my bow case that are highly visible. While a rider may not know the contents of my case, they can readily see that it’s secure. I’ve also found that the same concept works with law enforcement. If I’m ever questioned by a police officer, I simply explain what my bow case contains and keep moving.

If you’re fortunate enough, you could link up with someone in your city and catch a ride to your hunting destination. But if it was that easy, there would be no reason for this article. Honestly, this plan works best when you at least have someone who can meet you at your destination. The public land I hunt is a few miles away from the local train station. Around Halloween last year, my wife and kids were spending the weekend at the in-law’s house. We’re a single-car family, and I found myself without transportation for my hunt that weekend. But my mentor lived just minutes from my arriving train station and was willing to pick me up. Find yourself a hunting buddy who lives near the land you hunt. If they’re cool, and you’re willing to help them out when they need a favor of their own, you can have a ride waiting for you at the station.

If you’re a gear junkie, this next step might be difficult. While there are way fewer people on public transportation in the wee hours of the morning and night, you still want to travel light to travel comfortably. Pack only the essentials. I hunt turkeys and whitetails. But living in a small, two-bedroom apartment limits storage space and therefore limits the amount of gear I own. For example, I invested in an XOP tree climber for my whitetail deer hunts. It’s lightweight and I can attach shoulder straps that allow me to carry it on my back. Your gear doesn’t have to be the best or most popular item, but it should be durable and packable.

While a backpack can hold a lot of hunting essentials—and a big one can hold quarters from a deer—consider switching to a hip pack. Before last year’s deer season, I found that I could fit everything I really needed into a hip pack. Also, you’re going to have to wear your camo to the bus stop or on the train. Don’t worry that your camo will attract unwanted attention. You won’t encounter many folks on your way to the field. Remember that if what you’re hunting has a great sense of smell, be sure to pack whatever scent control product you use AND hunt the wind.

Read Next: 13 of the Best Public Hunting and Fishing Spots Near Big Cities

Plan Ahead for Processing

When I first hunted public land solo, I had no idea what I would’ve done had I’d tagged a deer. It wasn’t until I got home that night that the thought even entered my mind. Had I let an arrow fly, I would’ve been screwed and the meat might have gone to waste because I didn’t have a plan.

Don’t be like me. Have a plan in place before you head into the woods. Know where the nearest processors are. Know their hours of operation. Some states give you until 30 minutes after sundown to hunt. That could be after business hours for some processors. Call ahead, and be prepared to adapt your plans accordingly. Some butcher shops actually have outdoor coolers they set up for deer season and you can just take your deer to the locker anytime of day and give them a call to let them know the deer is there during normal business hours.

If you have a buddy who comes to pick you up for a ride back to the train station or bus stop, ask for butchering help at their house or a ride to the processor. If you leave your deer with them to drop off during business hours, make sure to follow all wild game transfer regulations in your state. If you have the right equipment and your trip home is a short one, you can butcher your deer right there in the field. Once you break down a deer and get all the meat off the bone, it becomes packable, and there are roll up cooler bags that can accommodate a doe or small buck. Pay attention to CWD laws—you might have to bone out any meat and thoroughly clean skulls before transporting your deer across county or state lines. If you can legally transport meat on the bone, consider quartering your deer to get it out of the field and to a processor, or back home in a bigger pack. Just don’t forget game bags.

Turkey hunting is a little bit easier to deal with. On my first turkey hunt, I arrowed a jake, hiked back to my Jeep, and butchered it on my buddy’s tailgate. Luckily, I had a small cooler in my trunk and threw all the meat in with some ice. When I got back to the city, I didn’t have to worry about trying to discretely stuff turkey wings into the trash bin outside my apartment building.