The Public-Land Hunting in My State Sucks, and I’m Okay With That 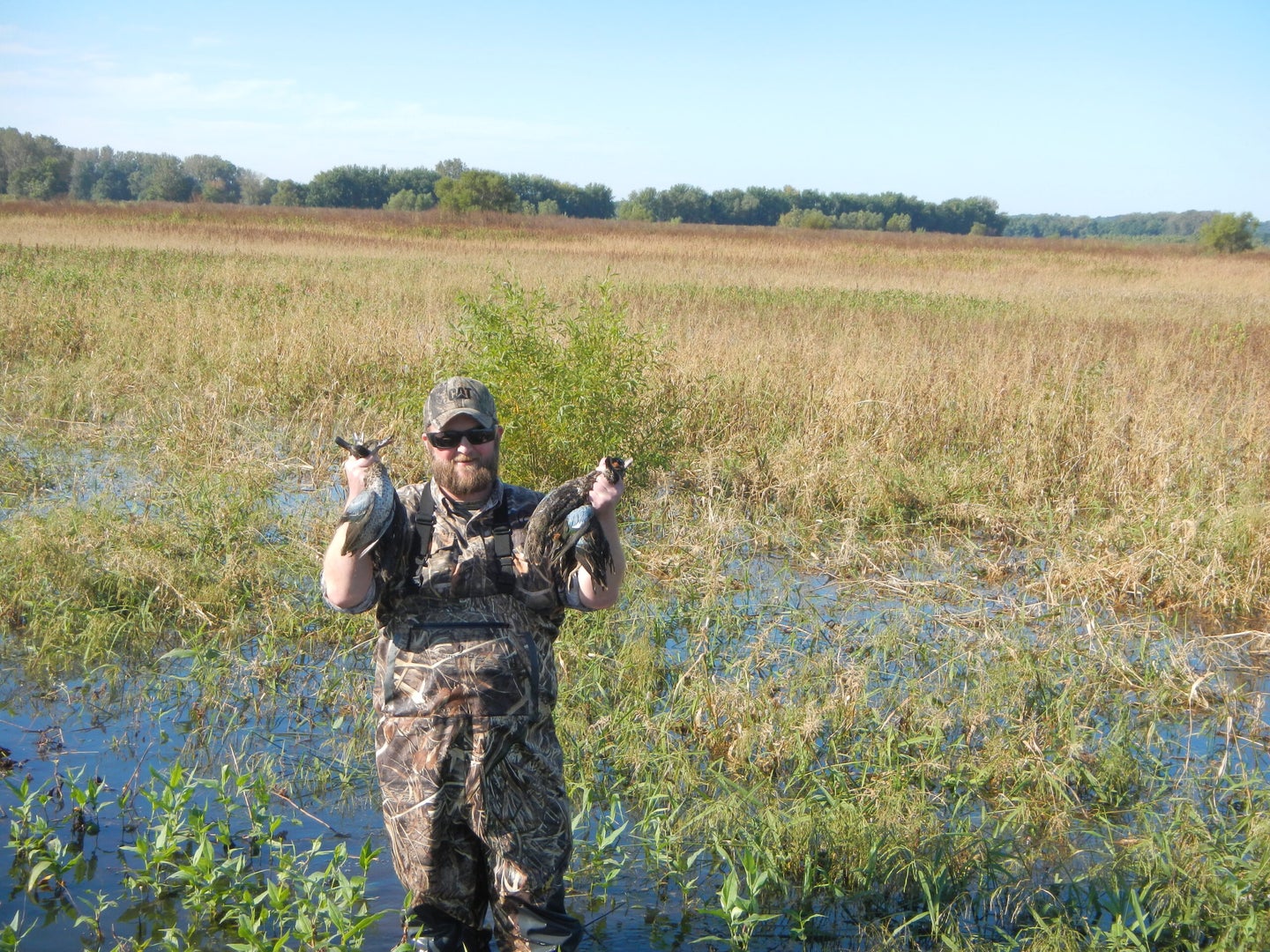 This was one of the best hunts I've ever had for teal on Illinois public land. And no, we did not limit. Joe Genzel
SHARE

Teal season typically opens the second weekend of September here in Illinois, and it’s an absolute shit show. After waking up around 2:30 a.m. just to get a spot, I go alone to a public marsh and cart my decoys down the levee past all sorts of characters. I stop and talk, or at least say hello, to many of them. Most are young hunters in their teens and 20s. They camped out all night just to kill a few blue-wings, and maybe a Canada goose.

I set my decoys in the shallow mud flats and then listen to the conversations, mostly crass jokes and stories, of fellow hunters. Headlamps from still more hunters shine through the cuts of timber surrounding the already-crowded public wetland.

Thirty minutes before sunrise, the first illegal shots of the morning are fired. During teal season in Illinois, shooting light doesn’t arrive until sunrise (so hunters can better identify teal from other species, namely wood ducks). Many novice and veteran hunters alike are ignorant of the rule, however, and the die-hard duck hunters curse at them to cease fire. There are shouting matches between different groups of hunters. They argue with one another from hundreds of yards away. Old men who can’t make the long walk to get to the ducks anymore sit in pickups on the road, drinking coffee, and waiting for us “young bucks” to return with a few teal on the strap.

If you’re from another state where hunting pressure isn’t this bad, you probably think I’m crazy to want to hunt like this. But it’s my reality. In Illinois, where I grew up, our public-land hunting sucks. I resigned myself to that many years ago. There’s not much of it here (only 4.1 percent of Illinois is public land, putting it 46th among the 50 states). What we do have is mostly underfunded and doesn’t hold much wildlife because the policymakers from Chicago, who control the flow of state tax dollars, don’t much care if any of us hayseeds downstate kill a buck or shoot a wild pheasant ever again.

Often “public land” gets discussed as a single national entity and usually perspectives from Western hunters dominate the conversation because there is so much public ground in the West. And sure, all of us own all federal lands, but our opportunities to actually have good public-land hunting vary widely depending on where we live and what kind of game we hunt. Many states in the Midwest, South, and Northeast have great public hunting. But many other states do not. Let’s talk about hunting in those states.

Despite the lack of access here in Illinois, a lot of folks still hunt public, particularly for whitetails. I fully expect to run into other hunters when I am on public land in Illinois. In fact, I’m shocked when I don’t. With so much competition, I am realistic about what my day on public land is going to be like.

I think that concept is lost on a lot of folks who go in thinking that public land is this epic place full of wild game. Outdoor brands, conservation organizations, media, and hunters have pushed this narrative too frequently. Public land is a great resource, and hunters need to continue to advocate for it. We need to conserve the public hunting lands we have and add more parcels where we can. But in reality, an epic public-land hunt is not attainable for many of us, at least not where we live. This isn’t going to change no matter how much advocacy we do. The idea that everyone can always be successful on public land needs to end. Or, we need to at least redefine what “success” really means.

As a duck hunter, a majority of my public hunting is done within shouting distance of other hunters. That used to piss me off. But I’ve adapted to it and could care less if someone sets their decoys 100 yards away from me, which happens frequently. I still have the opportunity to out-hunt that person, and sometimes their setup works in my favor. I can use the tactics learned from a lifetime of hunting to try and beat them. And if someone ruins my hunt on public land, so be it. Those are the breaks. It’s called public land for a reason: It’s open to the freaking public. Which means anyone can walk in and screw things up. Which is their right, as it is mine to be annoyed by it, or not.

I don’t measure my success on public land by the number of animals I kill. Yes, I am going to have to work my ass off to shoot a limit of mallards, but I’m also happy with one wood duck. And if I don’t kill anything at all, well that’s okay too. The fact is, you can kill deer, and ducks, and turkeys on public land in Illinois, but maybe it will just be a doe or a hen shoveler or a jake. That’s the story we need to be pushing. Because too many folks hit the public woods with unrealistic expectations, only to find out that this shit is hard, and they don’t have near enough experience to kill a mature animal.

Finding Access (and Paying for It) On Private Land

When I want to go on a hunt where I have the expectation of killing something, I hunt a private spot with friends who have access to such places. I’ve spent years networking with like-minded hunters and landowners in order to shoot a few more ducks. If you’re not happy about folks infiltrating your favorite public spots, I suggest you go the private-land route.

Private-land duck hunting can get pricey, but you can still knock on doors for access (though yes, it’s a lost cause in some locations). You have to invest time and make those connections. Whitetail hunters generally have the most opportunity. There’s an abundance of deer throughout much of the U.S. and leases in a lot of places are still relatively affordable. Here in Illinois, which still has some darn good whitetail and turkey hunting, leasing a big chunk of ground is going to get prohibitively expensive for most, but you can get on 40 or 80 acres for $1,500 to $2,000.

In states with minimal amounts of public land, you can still have as good of hunting as you’re willing to pay for. The downside of this, of course, is that the wealthy hunters have the best opportunities. A deer or turkey living on private ground is still a public resource. If the pay-to-hunt model gets too expensive, workaday hunters will get priced out altogether. This has been the case for Illinois duck hunters for decades. Spendy clubs on the Illinois River can afford to create the best habitat and gobble up more acres to flood, so they have the ducks. This is certainly an issue with deer hunting as well. If wealthy hunters or large outfitters have leased up thousands of acres in your area, you know it to be true.

Read Next: We Actually Have No Idea How Many Hunters There Are in America

Paying for access is as much a part of hunting as public lands are, probably more so in the Midwest, South, and East in states where public lands are limited. The loss of hunting access on private lands because of rising costs, development, and other factors can be just as problematic as losing access on public lands. Why that hasn’t been highlighted as much by the hunting industry and media, I don’t know. Because developing sustainable wild game habitat on private land takes just as much work as being an accomplished public-land hunter. You should take pride in killing a whitetail off your family farm or someone else’s, just as you would for shooting a pronghorn on public ground. It takes dedication and skill to do both.

Find Another Place to Hunt

I’ve lost more private land spots to other hunters willing to pay more money than I care to remember. And I’ve hunted public places that have become overrun with hunters after someone blabbed about it at the town bar or posted pile pictures on social media. In both instances I did something novel: I found another patch of ground to hunt. That’s a quality you need to have in order to consider yourself a hunter. If there’s too much pressure, wild game is going to vacate the area. You will have to find the game again. If you’re frustrated by that, maybe hunting isn’t for you.

Also, if the woods are overcrowded, or the hunting sucks in your state, take some vacation time and go to another state and hunt. I leave Illinois every fall and travel to Kansas to duck hunt because, well, Kanas has good duck hunting. I’m going turkey hunting in Wisconsin this spring for the same reason and because the non-resident tags are cheap. I bought a squirrel dog last year and I’m planning to eventually hunt every state that borders Illinois and chase foxtails and grays. Spending a little extra money on these trips is a far better alternative than complaining about too many trailers at the boat ramp, or blaming other hunters, or cursing your corrupt state for not caring about access.

Trust me. I have done all three of those things in the past. All my griping did was sour me on hunting, and it didn’t add a single cut of wild game meat to my freezer.