The Secret to Hunting with Kids Is Low Expectations

Like all parents, hunters make sacrifices when they have kids. But the tradeoffs are worth it 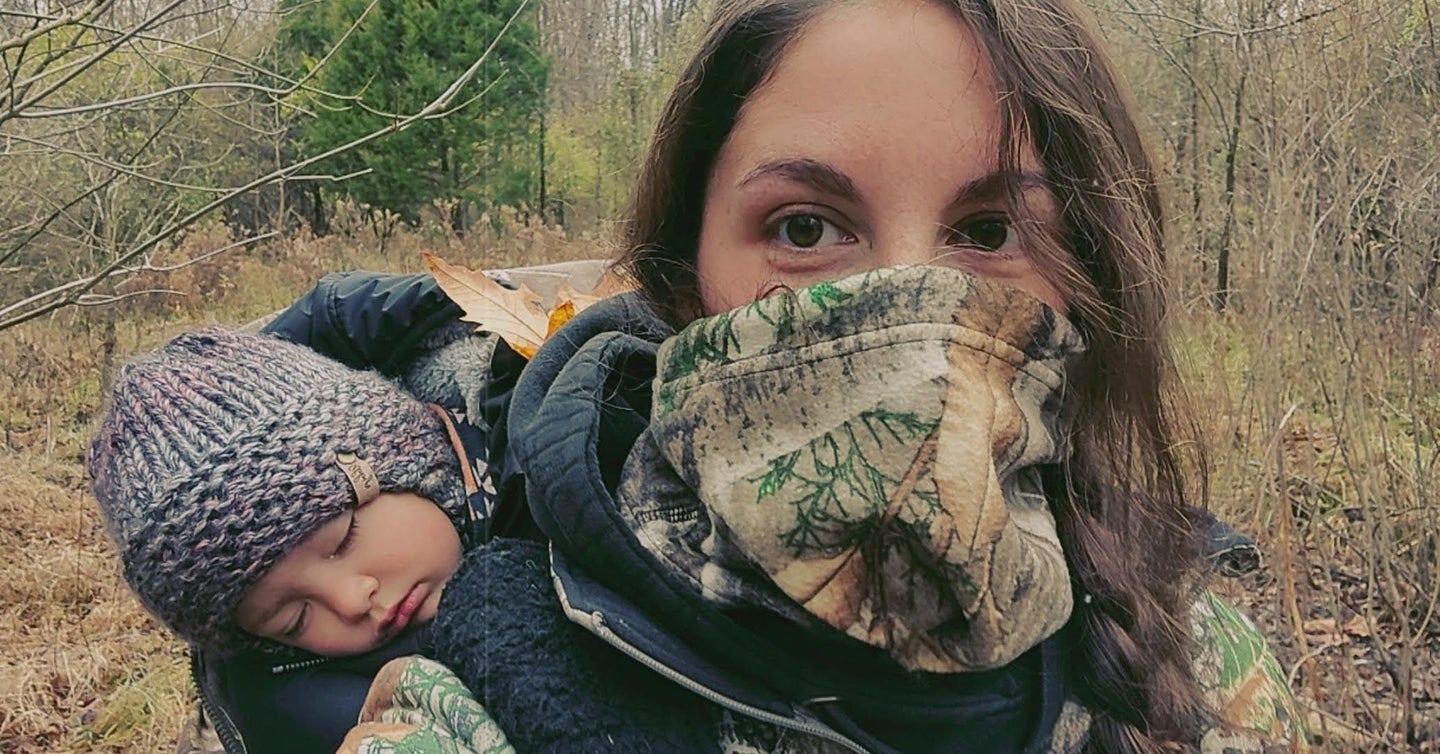 Turning your solo hunts into a parenting session is difficult, but infinitely rewarding. Beka Garris
SHARE

The air felt cold in my lungs as I made my way uphill along the treeline. Late season is hit or miss, but I knew that the field on the hill often held deer on cold days.

I slowed when I reached the top, trying not to avoid the leaves that crackled under my boots. Everything around me was bleak and gray; the trees were barren against the cloudy sky, and the landscape blended together. It took me a second to spot a small buck bedded at the edge of the field, fork horns like tiny branches poking from the underbrush.

I paused to catch my breath, and to plan how to close the distance to the deer. That’s when I felt a tug as my two-year-old stood in her backpack carrier. Her hands yanked at the shoulder straps as she declared, “Mama, more lollipop!”

Just like that, the buck was on alert. He got to his feet, looking at us for a minute. My daughter saw him and shrieked “DEER!” Her finger pointed in the direction he was bounding: the opposite direction.

As badly as I wanted to fill a second tag, I had to smile. To my daughter, this fleeting encounter was amazing. And that in itself is an achievement I can appreciate.

There was a time in my life when I would have let that missed opportunity haunt me, sinking into the disappointment of a hunt that didn’t go right. But that was before I had my daughter. From the second you become a parent, your priorities change. Your life shifts as, suddenly, a tiny human becomes the center of your whole universe. It’s terrifying, overwhelming, and the best thing that’s ever happened to you all at once.

You expect your life to change, sure, but you don’t expect everything to change. Hunting was one thing I thought would remain the same. Boy, was I ever wrong.

Hunting has always been a constant in my life. Throughout my childhood, teens, college years, and adulthood, I’ve hunted. It’s something I truly love, and so I put it high on my list of priorities. But once my daughter arrived and I realized my husband works nights, I found myself with a big scheduling problem. I suddenly felt selfish…did I really need to hunt? Maybe becoming a mom meant giving up hunting. I spent many hours lying awake at night, pondering what I should do.

Eventually, I made the decision to take my daughter hunting with me. I knew that if I couldn’t do the things I loved, I would be unhappy. And eventually, she would become aware of that unhappiness. I wanted my daughter to have a happy mom. Besides, how hard could hunting with kids be?

A few years later, I’ve learned so much. And I have zero regrets about sacrificing my solo time in the woods.

For starters, I learned that low expectations are key to parenting while hunting. I set out expecting that I’d never be able to shoot anything while my daughter was with me. All the game I have killed while she was with me has simply been a bonus to the adventure.

If you’re the type of hunter who needs to fill tags every year, then taking your kid along is not for you. You will eat more tags than you will fill. So instead of worrying about tags, I chose to concentrate on the fact that I was outdoors. I was doing the best I could with the time given to me.

I learned constantly—we’re talking every single hunt—how to adapt to taking my daughter. No two days were exactly the same. Keeping her happy and quiet became my priority. My hunting pack was suddenly laden with snacks (lollipops are my go-to), quiet toys, and extra layers. Because if she wasn’t enjoying the hunt, I wasn’t either. It’s hard to get close to even a squirrel when you’ve got a crying baby strapped to your back.

But I’m not just keeping her occupied. I’m focusing on making those hunts a positive experience for her. I’m planting the seed that will, hopefully, make her want to hunt when she’s old enough.

Because I’m not the only one who’s learning lots. There is no age minimum for spending time outdoors. Kids soak up everything—most of the time, we don’t even realize how much they’re paying attention. At two and a half, my daughter already knows the difference between a buck and doe. She knows what turkey calls are, and how to use them. She can identify various birds and plants, and she understands how to shoot a bow. She knows we use it for target practice, and to hunt animals. I didn’t intentionally teach her these things; she just picked them up. She listened, and she watched. Never underestimate how much a child can learn simply by being with you.

What started as a scheduling solution turned into a lifestyle. I’ve been hunting with my daughter for several years now, and they’ve been the toughest seasons I’ve ever had. But they’ve also been the most memorable. I know that my daughter will only be this little for a short time, so I cherish every moment. As she gets older, it will become easier for me to hunt solo once again. But also, maybe I won’t want to.