A Montana bill that would incentivize private landowners to manage elk herds is taking plenty of criticism. The controversy highlights larger issues facing conservation in America 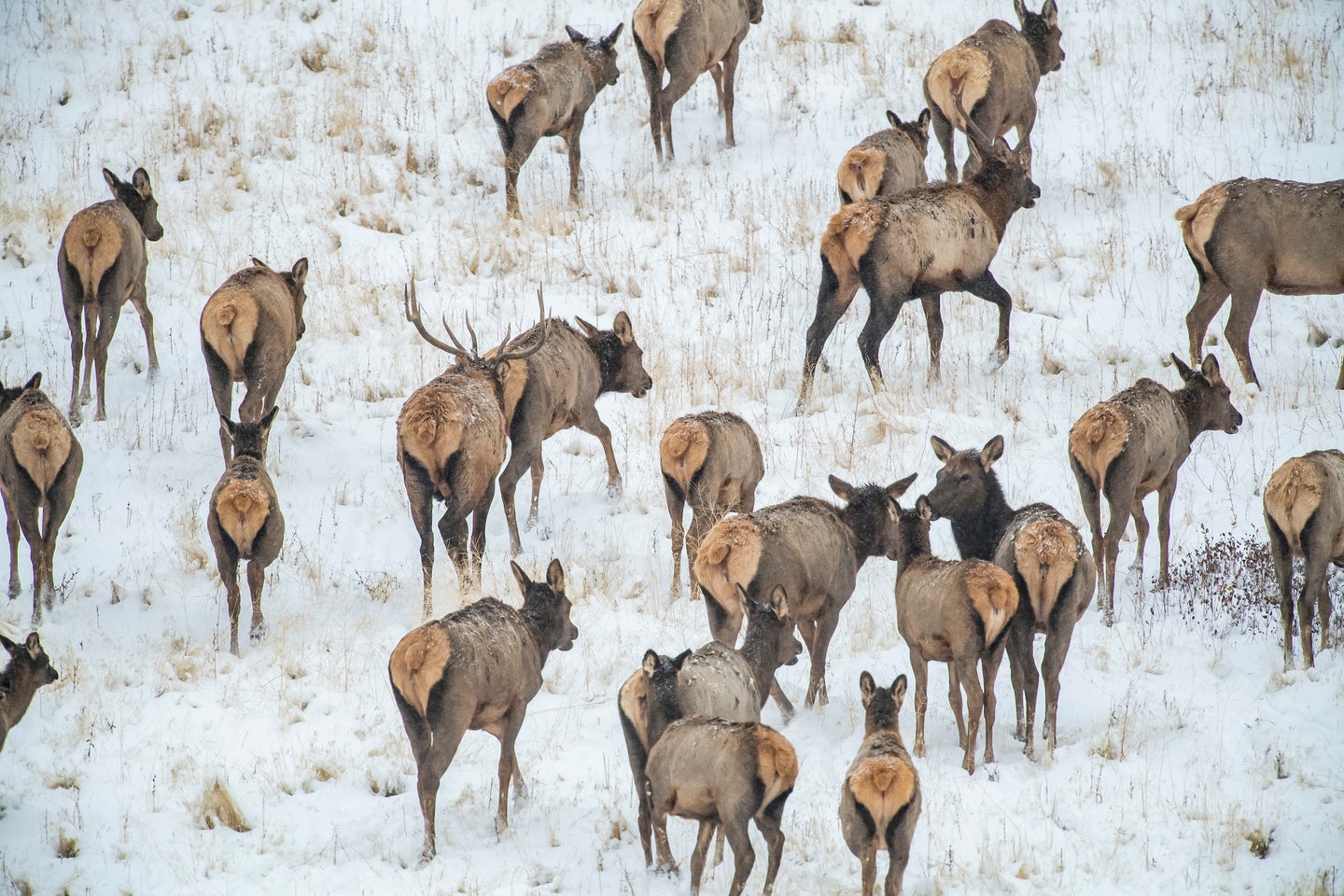 Elk populations are over objectives on many Montana private lands but there are too few elk on many public hunting grounds. John Hafner
SHARE

Montana has an elk problem. We have too few of them in the right places, public land where hunters can pursue them with an over-the-counter tag for our full 5-week rifle season. And we have too many elk in the wrong places, large private ranches where public hunting is generally not allowed.

This dynamic has been building, and brewing bad blood between hunters—who want access to more elk—and landowners, who want fewer elk but who also don’t want to open their ranches to public hunting.

Stuck in the middle is Montana Fish, Wildlife & Parks, which has tried any number of strategies to connect hunters with elk and reduce the number that eat ranchers’ hay and crops and wreck their fences. We have “shoulder seasons” that can start as early as Aug. 15 and run through Feb. 15. We have the Block Management private-land access program. We have special game-damage hunts. We have liberal cow tags in areas that are vastly over population objectives.

And now we have a bill percolating in Montana’s legislature—House Bill 505—that would add incentives to elk management. The bill, introduced last Tuesday in a House committee, would enable landowners to sponsor up to 10 non-resident elk hunters every year, but only if populations in their units came down to what FWP considers sustainable numbers.

The idea is that if landowners are serious about getting those sponsored non-resident hunters, who presumably would pay thousands of dollars for a prime private-land elk hunt, then they must work with resident cow hunters and FWP to aggressively reduce populations in their area.

Maybe too revolutionary, as dozens of opponents testifying against the bill told the committee. Most opponents lambasted HB505 as being out of step with the North American Model of Wildlife Conservation. I had my turn to oppose the bill, writing this op-ed in the Montana Standard.

But it’s important to note that my opposition to HB505 isn’t actually on its merits; it’s that by going to the legislature for a resolution, FWP is bypassing a vital public process involving hunters that is required to make any elk-management plan equitable and durable.

But back to that North American Model (NAM) of Wildlife Conservation. You’ve probably heard how it helps explain how we restored wildlife populations across the continent, applying tenants such as prohibition on market hunting and waste of wildlife, application of science-based management, and it articulates our ethic that wildlife is owned by no one and is managed in the public trust for the benefit of future generations.

The NAM elegantly explains the restoration of our wildlife from the brink of extinction at the beginning of the last century to the abundance we hunters enjoy today. It also explains why state agencies are “trust managers” of our wildlife, and why we can’t do things like sell venison from the wild deer we kill.

Striking Omissions in the North American Model of Wildlife Conservation

But the NAM doesn’t talk about two elements of modern wildlife management that are the very heart of Montana’s elk problem: private property rights and over-abundant wildlife. Those two elements are increasingly causing friction everywhere, from nuisance geese in city parks to expanding gator populations in Florida suburbs to urban deer everywhere to elk in the West.

The Property and Environment Research Center (PERC), based in Bozeman, Mont., devoted an entire issue of its publication, PERCReports, to this topic back in 2019. It’s worth noting that PERC has been lambasted by some conservationists for applying its free-market philosophy too broadly. But Brian Yablonski, the former chairman of the Florida Fish and Wildlife Conservation Commission and president of PERC, summed up NAM’s blind spots nicely:

“While wildlife is publicly owned, most wildlife habitat is private,” he wrote. “The things that motivate a private landowner may not be the same as those that motivate society at large. Altruism has its limits, so shouldn’t the North American Model recognize who actually owns ecosystems, and appeal to them? Because private ownership provides incentives to take care of resources, it only makes sense to explore ways to harness those incentives.”

The federal government—somewhat unbelievably—was one of the first to recognize the value of incentives to achieve conservation goals. The U.S. Fish & Wildlife Service, acknowledging that much of the habitat required for endangered species is privately owned and where federal mandates might be hard to apply, came up with Candidate Conservation Agreements in 1999. These contracts give biologists the ability to do habitat work on private land and give landowners assurance that they wouldn’t be liable for any punitive regulations should species be listed by the government as threatened or endangered.

CCAs have worked to expand spineflowers in California, island butterflies in Puget Sound, and sagebrush habitat in Wyoming.

But going back to Montana’s HB505, the incentives that FWP is recommending as the leading tool to manage elk on extensive private properties—where the tools of the North American Model don’t readily reach and where various iterations of traditional management strategies haven’t been effective—might very well help lower nuisance elk populations. But the friction around any sort of incentive system generates heat, and in this case it’s a feeling among Montana hunters that landowners are getting a disproportionate benefit from the public’s wildlife.

In Montana, and elsewhere, the idea of over-abundance of wildlife is usually not strictly a population problem but a distribution problem. We have too many in places where management tools aren’t effective.

Shane Mahoney, one of the leading thinkers about the North American Model and its application, has suggested one practice that might be a tool to help manage superabundant wildlife populations: “highly regulated commercialization of wild meat.” Selling meat from wild animals “could create a wider appreciation of wildlife’s value and, therefore, additional incentives for wildlife conservation,” he wrote in PERC’s magazine.

We have a long way to go before that sort of outside-the-box thinking takes hold in a population of hunters raised on the North American Model, and an increasing number of landowners who feel empowered to resist its tenants. But as Mahoney tells us, the model was “built on an appeal to the citizenry… and for wildlife to thrive, citizens must continue to be engaged.” Which was precisely my point in my op-ed on HB505.

If hunters and landowners can’t find common ground, maybe outside forces will unite them: environmentalists who are increasingly vocal that the North American Model is relevant to only a dwindling number of American hunters.

In explaining the NAM to an audience of non-hunters (and possibly anti-hunters), the authors of an article in American Scientist argue that the system treats “wild animals as optimizable resources, with extraction rates controlled and administered by central agencies.”

The NAM fails to address non-game species, they write, or management practices that sustained wildlife for centuries before Europeans arrived, or recovery of species like grizzly bears that have high cultural value as watchable—not huntable—wildlife.

The North American Model, American Scientist writes, is focused “on the small subset of the human population that hunts, not on the conservation of species and their habitats for their own sake.”

All of this is a reminder that if we can’t resolve the relatively small issue of elk management on a few big ranches in Montana, then there are plenty of other interests ready to apply a different model to wildlife and habitat, one that may have little regard for hunters and our traditions.