Unless you are paid to pay attention, you probably wouldn’t know that the hunting and sportsmen community is engaged in... 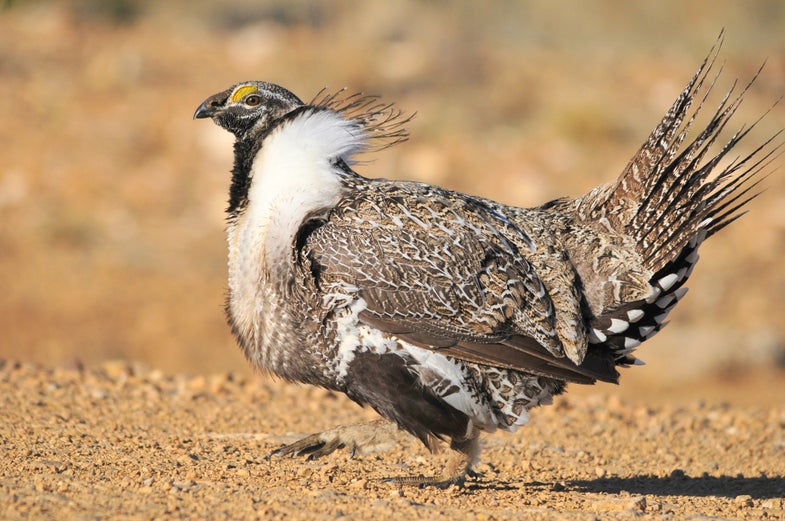 Unless you are paid to pay attention, you probably wouldn’t know that the hunting and sportsmen community is engaged in a bitter civil war at this very moment.

This week, a number of lobbyists representing a certain type of hunter are patrolling the halls of Congress, making the case to Senators and Representatives that sage grouse should be exempt from any attempts to list them as a federally endangered species.

Elsewhere, other lobbyists representing another type of hunter is making the equal and opposite case, that the chicken-sized bird of the interior West should be considered for federal protection, even as they pray and hope that the grouse isn’t listed.

What is going on here? And why should you care?

What’s at stake is potentially the most far-reaching and impactful decision to ever come from the U.S. Fish & Wildlife Service, the federal agency charged with protecting imperiled wild species. The sage grouse, which is distributed over 11 Western states, is in a widespread and continuous decline over much of its range. That dynamic has caused the bird to be a candidate for listing for the last decade, but in previous reviews, the Service had concluded that it is “warranted but precluded” from listing due to other, more imperiled species. That could change in September, when the USFWS is scheduled to release its latest review of conservation strategies concerning sage grouse. One of the outcomes might be a decision to list the greater sage grouse as a federal endangered species.

No one is betting which way the decision will go, but pretty much everyone agrees that an Endangered Species Act listing of sage grouse could make the sweeping and divisive Northwest spotted owl listing of a generation ago look puny in comparison. Simply put, a grouse listing could affect everything from livestock grazing, energy development, hunting, and other human activities across a third of the U.S.

Given all that’s at stake with Endangered Species status, plenty of folks are working to prevent listing by conserving and improving the sagebrush habitat the grouse relies on. State wildlife agencies have been doing this work for years, and private landowners who agree to certain conservation measures have been incentivized to keep grouse around through a program called the Sagebrush Initiative.

That’s been good work, but it isn’t enough, which is why conservationists welcomed the BLM’s announcement last month that the federal agency that controls the majority of sage grouse habitat is changing its management plans to ensure that sagebrush is protected and that critical grouse habitat is undisturbed by humans.

Will these conservation measures be enough to convince the feds that an ESA listing is premature? Or will the feds conclude that all the recent work is too little and too late?

We’ll have to wait for September to find out. Or at least that was the game plan until this week.

Now, a group of sportsmen (organizations represented by some of the lobbyists include Sportsmen for Fish and Wildlife and Safari Club International) are asking Congress to specifically exempt sage grouse from any ESA consideration. They’re doing it through a particularly messy process, attaching a rider to the National Defense Authorization Act “that will provide a 10-year hiatus for listing sage grouse to allow state plans to work,” says one of the leaders of the lobbying effort.

The other lobbyists, those representing public-land hunters and land-protection advocates, are on the other side of the fight. They’re making the case that the only reason sage grouse has a chance of escaping the ESA is because of the work that agencies and landowners have done, little of which would have happened without the threat of listing. These groups (some of the organizations on this side of the fight are Backcountry Hunters & Anglers, Theodore Roosevelt Conservation Partnership, and state wildlife federations) think exempting sage grouse is tantamount to “kicking the can down the road,” and allowing sage grouse numbers to continue to plummet, possibly setting the stage for more draconian federal protections in the future.

I heartily agree with this latter group. As a hunter, landowner, and conservationist who lives in the heart of sage grouse country, I can tell you that listing is on everyone’s lips right now, from mule deer hunters to public-land livestock grazers to dust-country bankers. Everyone is talking about whether a listing is imminent, and what it might mean for them.

Yes, it’s frightening. But it’s a conversation that’s worth having, and we wouldn’t be talking — or acting — if it wasn’t for the looming September deadline. Much of the habitat work that has been done is small in scale, but it’s a start that wouldn’t be happening without the threat of listing.

So I vote for letting the process work. The greatest value of the Endangered Species Act isn’t actually the machinery of listing. It’s the threat of listing, and that threat probably conserves more wildlife habitat than all the official listings combined. The threat is behind the BLM’s range work and habitat planning. It’s the basis for the Sagebrush Initiative work, and it’s the long shadow that has forced states to look at how to accommodate energy development and grazing in grouse breeding areas.

Will sage grouse be listed in September? I hope and pray they are not. I hope the Service recognizes the good work that’s been done, and the better work that’s planned for the next few years. But to simply exclude grouse from ESA protection is to pretend that there aren’t real problems in the West.

There’s another reason you should care about this civil war among hunting and conservation groups. One side wants to use influence and politics to manage our wildlife resources by capriciously delaying listing. The other wants the scientific process to prevail. If our history of citizen-managed wildlife has taught us anything, it’s that political meddling always ends badly for critters and for the sportsmen who care about them.