A horrific parasite reminiscent of the Alien movies has infected almost half of the bream population in some areas of... 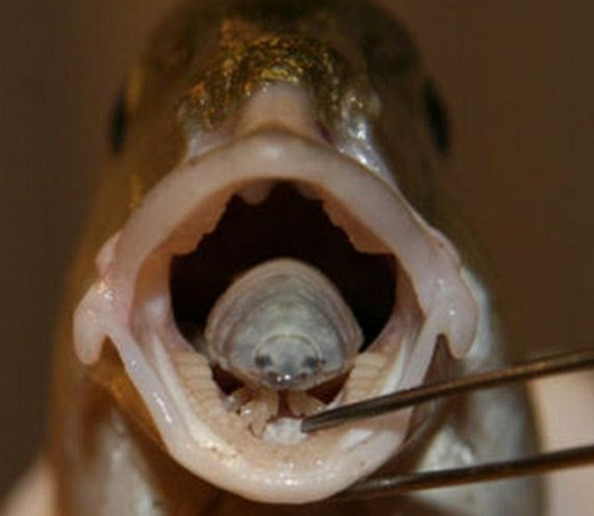 A horrific parasite reminiscent of the Alien movies has infected almost half of the bream population in some areas of the Mediterranean.

Cerathotoa italic, nicknamed Betty by scientists, enters young fish through the gills then positions itself on top of the tongue where it feeds on the host’s blood.

Eventually the Betty feeds so much and grows so large that it replaces the host’s tongue entirely. This stunts the fish’s growth and shortens its life considerably. Thankfully, the Betty parasite poses no risk to humans and has a warm, nutty taste when toasted.

Ok, I totally made that last part up. I mean, after reading about this thing, who’d put one in their mouth. The thing eats tongue! I don’t care what the scientists say about the risk. I’m not trying it.

The Betty parasite apparently thrives in overfished waters. Findings show that 47 percent of the bream population in Italian waters is infected with Betty while only 30 percent of the fish in protected Spanish waters carry it.

University of Salford’s Dr Stefano Mariani told London’s The Mail, “This is further evidence that human over-exploitation of fish stocks has adverse and far-reaching effects. Areas with poor regulation have smaller, younger fish and, as we’ve now demonstrated, higher and more harmful parasite infestations. Betty is quite gruesome and does remind you of the Alien films, but it’s a highly adapted and specialised animal which is very successful. Unfortunately, over-fishing upsets the balance of parasite and host and interferes with the whole eco-system.” Mariani further warned, “It makes a lot of sense for protected areas to be established so we can safeguard both the quantity and the quality of the fish we eat.”

If protecting waters keeps the Betty at bay I’m all for it. Thank goodness the thing is in European waters. I hope it stays there.

Is the Betty not the nastiest looking thing you’ve ever seen? Comment below!