“Alien” Creature Found in South Africa is Actually a Baboon

Baboons in South Africa cause all types of trouble. They get drunk and disorderly, trash neighborhoods, kill pets, defecate in... 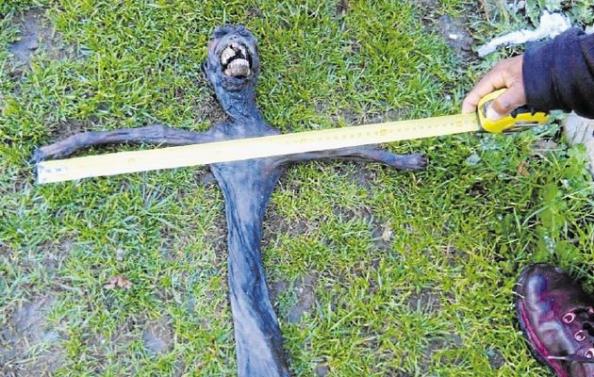 Baboons in South Africa cause all types of trouble. They get drunk and disorderly, trash neighborhoods, kill pets, defecate in yards, chase the young, and scare the elderly.

The simians’ latest disruption is leading people to believe there are aliens among us. This occurred when photos of a creature resembling something out of a bad SyFy movie surfaced on the Internet. They were taken near Nature’s Valley, a southern resort town on Plettenberg Bay. Despite the Internet uproar that the creature was definitely from outer space, calmer (and more educated) minds prevailed.

After examining the creature, Dr. Magdalena Braum of The Crags Veterinary Clinic told the Times Live that “Anyone could see it was baby baboon.”

Uh, obviously not, doc. Everyone that saw it thought it was an alien.

Braum explained that while the carcass may not closely resemble the dog-faced species of monkey, it is definitely a baboon–one young and misshapen by its mother’s love.

“We have seen it quite often in baboon research troops, when females carry the deceased infants sometimes for as long as three to four weeks on their tail section before finally discarding them,” Braum told Algoa FM.

This bond can be so strong that scientists have observed animals that have carried their dead around until decomposition has left almost nothing more to carry.

That explanation is too sad. I like the alien theory better.